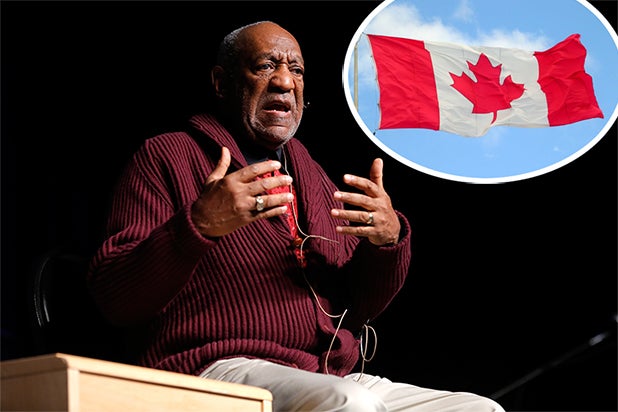 Concerts are canceled every month for various reasons ranging from unexpected deaths, to throat polyps, to military coups. But for Bill Cosby, who has been slapped with nearly 30 allegations of rape, sexual assault and drugging, the show will go on — whether ticket holders want it to or not.

The accused comedian returned to the stage Wednesday night and will perform at three different Ontario venues this week. While some fans are still interested in hearing his jokes, others are not. Many purchased tickets months ago, before his reputation was sullied by a string of allegations, and now they’re stuck with them.

“The people asking us or (London, Ontario venue) Budweiser Gardens to break a contract are doing it from a position of extreme convenience,” he added. “They have no understanding of what they’re asking us to do.”

Women’s advocacy groups, local politicians and Hollywood heavyweights like Judd Apatow all disagree. They have called on this week’s venues — Centre in the Square in Kitchener on Wednesday, Budweiser Gardens in London on Thursday and Hamilton Place Theatre in Hamilton on Friday — to cancel Cosby’s upcoming shows, but they’ve had no luck.

Megan Walker, executive director, for the London Abused Women’s Centre, was inspired to act after ticket holders approached her organization asking her for help. They had purchased tickets to see Cosby before allegations of rape and sexual assault surfaced and suddenly couldn’t get rid of them.

“They couldn’t get their money back because the concert had not been canceled,” she explained. “[So,] we decided to organize a protest.”

Upon his Canadian debut on Wednesday, Cosby was greeted by several dozen protesters, some of whom had once planned to see his show. Walker has a much bigger protest planned for Thursday’s show in London, where she said up to 500 people will come out and show support.

“I have been in touch with Budweiser Gardens and also with the promoters,” Megan Walker, executive director of the London Abused Women’s Centre, told TheWrap. “I really wish they would be taking action to cancel this. There’s no point in coming to three communities when they are not wanted.”

Her first instinct was to plead with the promoter and a representative from the venue to cancel the events, but she said they told her their hands were tied.

“We’re under contract with the promoter to bring the artist to the venue,” Ike Richman, spokesperson for Global Spectrum told TheWrap. “[We] are not in any position to cancel the show. We’d be violating a contract if we did; there would be a lot of fines and legal fees.”

Global Spectrum manages dozens of venues in North America, including London’s Budweiser Gardens. Richman revealed that future promoters might be wary of doing business with his company if it were to disregard the terms of its contract and cancel Cosby’s show.

“Reputations are on the line within the industry,” Richman said.

IAE is promoting this leg of Cosby’s tour, per the agreement Epstein said his Chicago-based company reached with the comedian long before these allegations resurfaced. Epstein said he “supports” the protests, but just so long as they don’t disrupt the 77-year-old’s performance.

“I want to make sure that the thousands of people who bought tickets to this show get what they paid for. That’s my job,” Epstein said.

Cosby fans may get the show they paid for and then some. Walker expects up to 500 people to attend Thursday’s protest. She says there will be speakers, signs and even literature; participants will hand out fliers to those hoping to enter the comedy show, which will be imprinted with the names of 27 Cosby accusers.

But Walker said her organization isn’t seeking confrontation. “For us it’s really about raising the profile of the issue,” she explained. “If there are additional women who are able to come forward and go to the police or disclose and seek some counseling as the result of our efforts, that will be a success.”

Walker said the idea for the protest came to her after irate ticket holders approached her, complaining because promoters wouldn’t give them refunds after rape and sexual assault allegations surfaced.

In December, while hackers were disrupting the release of “The Interview,” Sony Pictures Entertainment allowed the nation’s top theater chains to drop the film from their lineups.

If Cosby were similarly inclined he could offer venues a chance to back out of their contracts and drop his comedy show, and perhaps these protests could be avoided. But the accused comedian wants the show to go on.

“I’m going to give my fans the show of their life,” he said Tuesday in a statement.

Critics are hoping he changes his mind at the 11th hour, but Walker sees a silver lining even if he doesn’t.

“What is great about this whole thing is that a number of people are now engaged about the issue,” she said.

Richman agreed. “If for some reason his performance helps elevate the cause for women who are the victims of sexual violence, then that would be a good thing,” he added.