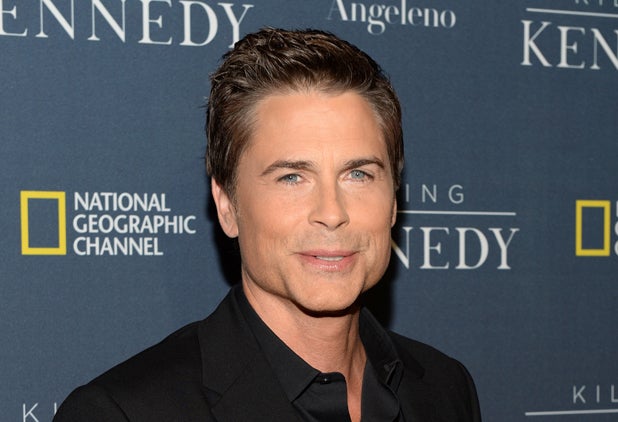 National Geographic Channel threw its West Coast premiere of “Killing Kennedy” at the Saban Theater Monday night, six days before the TV debut and a few weeks before the 50th anniversary of the infamous assassination.

The TV movie, which stars Rob Lowe as JFK, Ginnifer Goodwin as Jacqueline Kennedy, Will Rothhaar as Lee Harvey Oswald and Michelle Trachtenberg as Marina Oswald, was shot in just 18 days on an independent film budget, but feels much larger. Perhaps that’s the subject matter.

Monday evening’s celebration mimicked a campaign party, down to the balloons and “Kennedy/Johnson” buttons and bumper stickers. Here are seven things we learned at the event:

1. Rothhaar steals the show in a movie filled with larger than life characters.
The man who played Lee Harvey Oswald did a killer job (pun unintended, but not revoked) in the challenging role. Rothhaar had a very uphill battle in the TV film: Play one of the most despised men among known leads and still be interesting, beyond just being creepy. He nailed it, adding depth to the bad guy.

2. Michelle Trachtenberg can speak Russian.
Apparently. At least, she does so for most of the movie. The “Adventures of Pete & Pete” actress is all grown up as Oswald’s wife from Minsk, who is brought back to America for the promise of a lifestyle that never came to fruition. And Mrs. Oswald is not down with Lee’s murderous antics — the film makes that opinion quite clear as she leaves her husband, hides his guns (but gives them back) and sobs when the president is shot.

3. There are no conspiracy theorists here.
The National Geographic Channel had a very clear message in its movie: Lee Harvey Oswald killed John F. Kennedy. He acted alone, it was very premeditated. Those surrounding Oswald were only guilty of naivety — if even that. Except the FBI, perhaps. The term “grassy knoll” was apparently not even in the script. (Not that we’re complaining, mind you.)

4. The movie presents Kennedy as an incredible president who never did anything wrong.
“Killing Kennedy” is unapologetic about the slain president, depicted as a great man that occasionally dabbled in other women. Jackie loved him unconditionally. Oh and the Bay of Pigs was not his fault, understand? You will.

5. America Loves Jackie Kennedy, but Canada wouldn’t let her go.
Goodwin, who played the First Lady, was scheduled to appear at the screening and reception but could not get out of the airport in Canada, NatGeo President Howard T. Owens told the audience. Don’t worry, she sent her regards from our neighbor to the north.

6. NatGeo has the Rob Lowe stamp of approval.
“I’ve worked for everyone” the actor reminded the audience in his pre-film speech, adding that NatGeo knows what they are doing. Lowe spoke of the efficiency with which they shot the relatively low-budget TV film. His first day on set took from Camp David to the Cuban Missile Crisis to the Oval Office. No wonder Kennedy was so beloved — the man was everywhere.

7. Hollywood does not love Bill O’Reilly.
The Fox News host wrote the eponymous book that was adapted into the TV film. Everyone else got a nice, warm Saban Theater round of applause during the closing credits — but not O’Reilly. What he got would be considered more of a polite smattering. Welcome to Los Angeles.