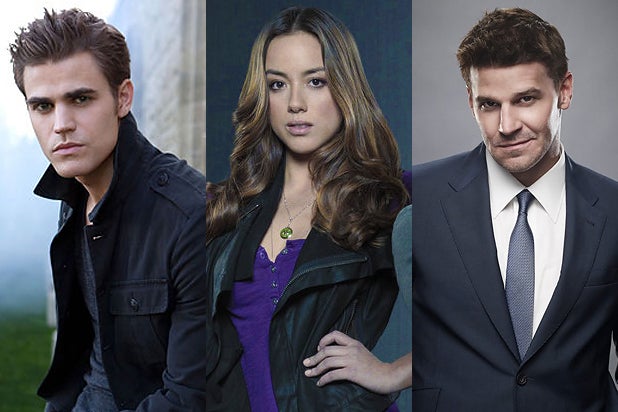 San Diego Comic-Con is a sacred pilgrimage for fans of all things nerdy, but like any trip to Mecca, this journey can be daunting (if not dehydrating). But don’t fret Nervous Nellies — the experts are sharing all the intel you need to make this year’s convention its most enjoyable yet.

TheWrap spoke with directors, showrunners and stars behind such projects as “Agents of SHIELD,” “Mad Max: Fury Road” and “The Vampire Diaries” to find out what they’re looking forward to this year — not just as panelists, but as fans and attendees themselves — and their tips for fellow attendees.

David S. Goyer, executive producer, “Constantine”
“Comic-Con can get ridiculously crowded. If you can attend the Preview Night or Thursday, by all means, do bring a backpack for swag. Your arms will get tired. Trying to walk the main floor on Saturday and Sunday is like wading upstream through a flash flood. You can still find some real gems — from original comic art to rare toys on the main floor. Thursday has an awesome panel with authors Jeff Vandermeer and Lev Grossman, who are writing some of the coolest genre fiction out there right now. Spend some time in Artist’s Alley. You’d be amazed what kind of luminaries are hanging out there. I’ve gotten some incredible sketches done in past years by illustrating legends. Kelly Jones is supposed to be there this year. Ed McGuinness. Ramona Fradon. Bernie Wrightson! For me, getting a chance to meet some of my creator heroes was and remains the best part.”

Aisha Tyler, “Archer”
“The impulse is to try to do and see everything. This is impossible. Leave yourself room to sightsee, eat, and most importantly, nap. The excitement of seeing your show in the company of thousands of bellowing, hyperventilating fans will drain you like sudden death overtime at the World Cup. Your panel will fly by. You will not remember any of it. Afterwards all will be a searing blur of screaming adulation, slightly erotic cosplay and superhero babies. Try to take a photo or two, especially if you can find a tiny Deadpool. They are the most adorable. If you see someone whose work you love, do not be afraid to skitter up to them and ask for a selfie. No one will judge you. Fandom rules here, and this is the time for you to squee with abandon. I’m looking at you, Kit Harrington.”

Shane West, “Salem”
“I’m always hoping to get on the floor and check out all the booths and the fans decked out in intricate costumes, but I usually never get the chance. Press and interviews take precedent and I end up roaming around aimlessly with a giant cup of coffee. I tell the newbies and the vets that they should DEFINITELY come check out the Salem panel on Saturday! Otherwise, Petco Park is a must. Also, number one survival tip (besides hydrating) is to find a restaurant off the beaten path that isn’t jam packed with customers. And when you do find that restaurant, don’t tell a soul. Keep that secret locked away for future use!”

Chloe Bennet, “Marvel’s Agents of SHIELD”
“I’m actually really, really excited to go down to Comic-Con again! I had an absolute blast last year. I don’t think I would do anything different this year — maybe I would bring a pair of flats because it involved a lot of walking, but I’m still totally planning on walking the floor. This year might require some sort of disguise though now that the show has aired… So we shall see!

“As for being able to have time to fan girl… Unfortunately, our schedule only really allows for about one hour or so of free time, so I most likely won’t have time. But I really do fan girl over our fans. I think it’s so exciting to meet the people who make our jobs possible. They are always so funny and have a lot of good input. I also just want to see someone dressed as Skye … that would be awesome!

“Last year was my first year going and I remember being both excited and nervous, and Joss [Whedon] just said, ‘Well I’ve been before, so you will be in good hands.’ When I got there and realized he was the freakin’ KING of Comic-Con, I realized how much of an understatement that was! But I guess my advice would to be: go in expecting chaos and craziness. It’s the best part of it all. And be well caffeinated! Ha!”

David Greenwalt, creator and executive producer, “Grimm”
“Relax. Go with the flow … We’d love to see the ‘Avengers: Age of Ultron’ panel, but we won’t have any time.”

Dylan Bruce, “Orphan Black”: “Whether it’s sharing an elevator and being witness to old friends Sir Patrick Stewart and Sir Ian Mckellen catching up, or having the cast of ‘Orphan Black,’ ‘Game of Thrones’ and ‘The Amazing Spider-Man 2’ all jockey for elevator space, the elevators are something I definitely hope to see a lot of. I never thought I’d say that in my lifetime. Nerd HQ is a definite must for all Comic Con newbies and vets. The panels are intimate and personable, the setting is beautiful, it’s for a great cause, and all in all a ton of fun!”

Paul Wesley, “The Vampire Diaries”
“I’ve never actually gone to Comic-Con as a spectator but I would imagine it’s rather overwhelming. Definitely plan on wearing comfortable shoes because the traffic is insane so you will be walking everywhere. Obviously [there’s] the crazy costumes. But I also love running into old friends and people I’ve worked with that I haven’t seen in ages. I ran into Bryan Cranston last year. He played my father in a mini series years ago and he’s a great guy. It was good to see him. I always unexpectedly bump into someone here and there. It’s fun.”

David Boreanaz, “Bones”
“It’s an overwhelming sense of excitement for the whole arena of new shows and faces. It’s that time when you are gearing up to start production of your own show. It’s always great to see how much Comic Con has grown as an event, and the overall energy is what I look forward to the most. When we started in 1997 with ‘Buffy,’ the audience was smaller and cult-oriented. Now you have a similar audience, but it has also now grown in stature. The panels are my favorite thing to do because you get to feed off the audiences energy.

Loren Bouchard, creator and executive producer, “Bob’s Burgers”
“You can go anywhere. The people who work at the Con are not security professionals. If you see an interesting door, go through it — I don’t think they prosecute.”

George Miller, director “Mad Max: Fury Road”
“This is my first. I’m a Comic-Con virgin. However, this is my clan. I was that kid who got in trouble in class for drawing cartoons and for reading comics concealed in text books. Also the bloke who skipped too many classes in med school to catch the double feature in the local grindhouse. There are a ridiculous number of compelling choices. But, for me, Guillermo del Toro. Always.”

Paris Barclay, executive producer/director, “Sons of Anarchy”
“This whole deal that it’s become. And it’s going to be … this one’s going to be particularly sad. Comic-con has been great to the show, the fans have been rabid, as they so often are, but in our case in particular, there’s been a lot of love. And frankly, we love bringing the cast there because it galvanizes them.

“Man, I’d love to go to Guillermo’s panel, I know he’s going to be talking about … anything he’s doing I’m interested in. I’d love to see what he says about ‘The Strain,’ I’d love to see his reaction to that, I wonder if they’re going to show anything, you know, I wonder if he’s got anything from ‘Crimson Peak.’ If I had the time to be a fan there, I would definitely go to see what Guillermo’s up to. You know, I’m a Marvel guy too, not a DC guy, so I don’ t really care as much about Batman vs. Superman, but I am interested in the evolution of the Marvel universe, so I’d always like to see what they have in store…”