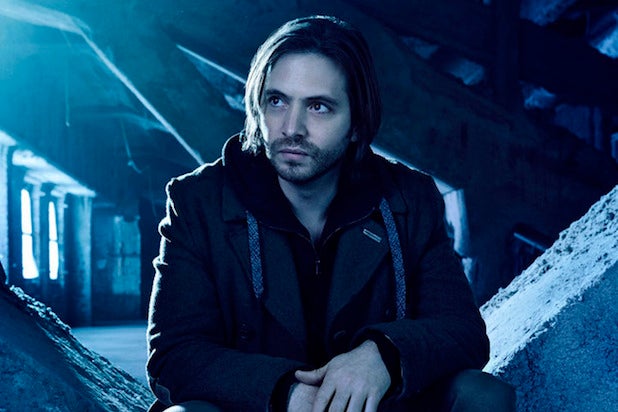 That’s about as far as similarities go. “The film is the inspiration for the show. The show is its own thing,” Aaron Stanford told TheWrap . “It becomes a different experience quickly.”

On the show, Cole (Stanford)  — based on Willis’s character from the film — is surviving an apocalyptic world when he crosses paths with more survivors. Backed by a scientist and virologist, Cole travels to the past with hopes of assassinating the root of a deadly global virus: the leader of the Army of the 12 Monkeys.

See video: Aaron Stanford Is a Blast to the Past in Latest ’12 Monkeys’ Trailer

Stanford, who had previously worked with the show’s co-creators on The CW’s “Nikita,” compared the benefits of television over movies.

“My character is given a lot more time to develop. A film has two hours and a TV show potentially has five years to develop a character,” he said. “[Matalas and Fickett] approached me, and they had a different interpretation of the Cole character. They thought I would be really good for it.

Natalie Chaidez, a first-time showrunner,  is aware of the backlash so-called “reboots” receive.

“The audience of the film had a fondness with the movie, but with the show you can find the pieces you couldn’t quite see peering around a dark corner,” she said. “You can elaborate on an idea.”

Chaidez also noted how else the storyline differs.

“It makes you look at things in a heightened way. It’s about terrorism, exploring fears, wonderment and big ideas,” she said. “And with a human touch.”