Cameron Crowe‘s Oscar-winning movie “Almost Famous” was released 15 years ago this week, an anniversary worth noting for fans of Crowe and of rock ‘n’ roll on film.

And I find its anniversary of particular note, because I have some ties to the era and the scene it depicts, and to the film itself. I was writing about rock ‘n’ roll for the Los Angeles Times at the age of 19, which would have been impressive except that Cameron was already around, too, two years younger and writing for Rolling Stone.

These days, when people who didn’t know me back then find out about my background as a young rock reporter, about eight out of 10 of them say, “Oh, ‘Almost Famous.”” And my standard response has become, ‘No, I’m almost ‘Almost Famous.'”

So with the anniversary here as Crowe goes to work on his HBO series “Roadies,” a topic he first explored in “Almost Famous,” here are 15 quick hits for 15 years. 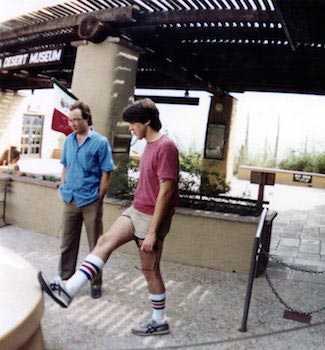 Steve Pond and Cameron Crowe in the early 1980s

1. “Almost Famous” started with a magazine story about Elvis Presley
In the late 1990s, I was writing and editing for a short-lived Ticketmaster publication, Live! magazine. For one of the regular columns, we asked notable people to write about a live performance that had a big impact on them. I asked Cameron if he’d care to contribute, and he immediately said yes — he wanted to write, he told me, about going to see Elvis Presley with his mother when he was a young teenager.

2. The magazine story was also about Eric Clapton, and about Cameron’s mom
The finished article wasn’t just about seeing Elvis in the early ’70s in San Diego. (In fact, neither Cameron nor his mom even liked that show.) It was also about a subsequent concert of Derek and the Dominoes, Clapton’s band in that era, and about his relationship with his mom, whose distaste for rock ‘n’ roll was pronounced.

3. But the story never ran
It was a great story, but I’d asked for 750 words and as I recall Cameron turned in about 4,000. And when it became clear that we wouldn’t have the space to run the whole thing, he was firm that he’d rather we killed it than cut it. So we did, reluctantly.

4. Instead, it led to a movie script.
It was OK that we killed the story, he told me in a subsequent email, because writing the story had given him an idea for a screenplay he wanted to write about himself, his mother and his early days in rock music. And a couple of years later, there it was: “Almost Famous.”

(Given the stories he accumulated during his days as a rock-journalist wunderkind, the idea was no doubt kicking around before he wrote that magazine story. But he told me the story inspired the movie, so I’m sticking to that.)

5. It wasn’t called “Almost Famous” at first
Cameron went back and forth on titles, and for a while he held out for “Untitled.” At one point I asked him if that was because it was his fourth movie, after “Say Anything,” “Singles” and “Jerry Maguire,” and the fourth album of his beloved Led Zeppelin was untitled (though it became known as “Led Zeppelin IV.”) He grinned and said yes. But the studio guys apparently weren’t Zep fans. 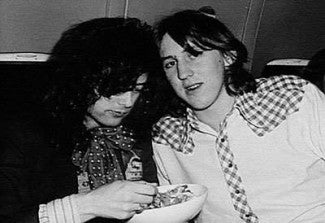 6. If Cameron Crowe was ever that awkward around rock ‘n’ rollers, it wasn’t for long
I have little doubt that Patrick Fugit’s character, klutzy and ill-at-ease William Miller, is how Cameron remembers himself. And maybe he was like that at 15. I didn’t meet him until a few years later — but by then he was a hell of a lot more comfortable backstage than I was.

7. Lester Bangs may have counseled Cameron to be “honest and unmerciful,” but the kid didn’t listen
The legendary rock critic (played by Philip Seymour Hoffman) offers sound journalistic advice when his character cautions the young writer not to make friends with his subjects. “Friendship is the drug they feed you,” he says. But there’s a reason Cameron was always the rock star’s favorite journalist, and it wasn’t because he was unmerciful.

8. I don’t care if that scene bends the truth, because it contains one of the film’s best lines
Says the curmudgeonly rock-critic elder to the cub reporter: “The only true currency in this bankrupt world is what you share with someone else when you’re uncool.” The line even provided the title of Crowe’s official website, theuncool.com.

9. It was pretty true to Rolling Stone
The building in San Francisco did look like that. Jann Wenner did pretty much act like that. Ben Fong-Torres sort of talked like that. As they say, close enough for rock ‘n’ roll. 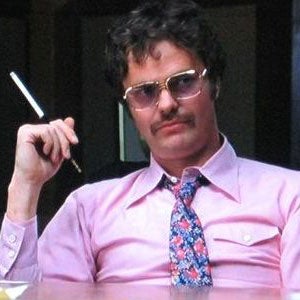 10. Hunter S. Thompson did not hang out in the Rolling Stone music department
Attention, anonymous user who wrote “Rainn Wilson‘s character, David Felton, seems to be loosely based on Hunter S. Thompson, down to the cigarette holder” in the “trivia” section of the film’s IMDb entry: Rainn Wilson‘s character, David Felton, is actually based on a Rolling Stone writer named, um, David Felton, who looked and acted a lot like that, down to the cigarette holder.

11. Rolling Stone fact-checkers were rigorous, but not evil
As hard as it may be to believe in these post-UVA days, Rolling Stone’s research department was made up of meticulous fact-checkers who put us writers through hell. But I never encountered one as anti-writer as the character in the film, or one who automatically took a subject’s word for something that a writer witnessed firsthand. (And though that character is one of the only people at Rolling Stone to be given a fictional name, she’s based on a real person.)

Aside from the too-fast timeline at the end of the film, this is the one part of the movie relating to Rolling Stone that doesn’t ring true.

12. Oh, and the film maligns the capabilities of a mojo machine
One laugh line in the film comes when editor Ben Fong-Torres calls William Miller and tells him to use a new-fangled machine to transmit pages over phone lines. “A mojo — it’s a very modern machine that transmits pages over the telephone!” he says. “It only takes 18 minutes a page!”

When I worked in the L.A. office of Rolling Stone in the early ’80s, we had a Xerox Telecopier, which had been dubbed the mojo machine by Hunter S. Thompson. (In fact, we apparently had the exact mojo machine that Thompson used to abuse.) 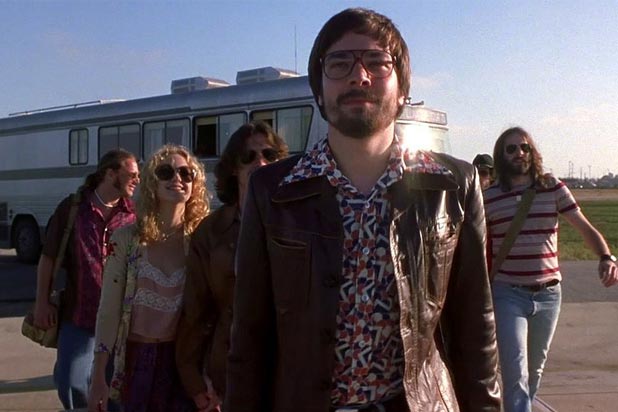 13. I can’t say for sure, but I don’t think Irving Azoff ever did Mick Jagger impersonations
At one point in the film, a hotshot rock manager played by Jimmy Fallon but clearly based on Azoff comes to visit the movie’s fictional band, Stillwater, and tells them that the music business is changing and they need to make their money right away. “If you think Mick Jagger is going to be onstage singing ‘Satisfaction’ when he’s 50, you are sorely mistaken,” he says, doing a bit of the Jagger impression we’ve all seen Fallon do.

It’s a funny bit and an obvious laugh line, and for all I know Azoff used similar lines when he was trying to woo bands back before he became the mogul he is today. But I’ve never seen the guy do Jagger, and I’d be pretty surprised if it was ever part of his repertoire. 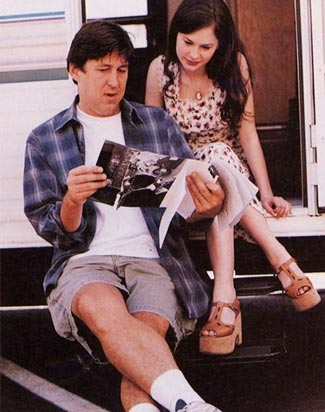 14. All those fans and hangers-on? Real people
If you know the movie well, you might remember Vic, the diehard Led Zeppelin fan whom William encounters a couple of times in his hand-lettered t-shirts and extravagantly emotional fandom. I still have a vivid memory of that guy and his shirts, sitting in the front row of many a show and all but collapsing at the proximity to his idols.

That’s just one example of how the movie did nail the milieu and the cast of characters.

But, you know, I can’t speak to the groupies like Penny Lane, played in the film by Kate Hudson. They might have hung out with Cameron, but they never hung out with me.

15. Sometimes, rock ‘n’ roll can take you to very unusual places
Four or five years after initially assigning the Live! magazine story, I was standing in the wings of the stage at the Shrine Auditorium when Cameron Crowe walked offstage holding the shiny new Academy Award he’d just won for writing “Almost Famous.” I congratulated him, and he grinned and shook his head. “This,” he said slowly, “is a surreal experience.”