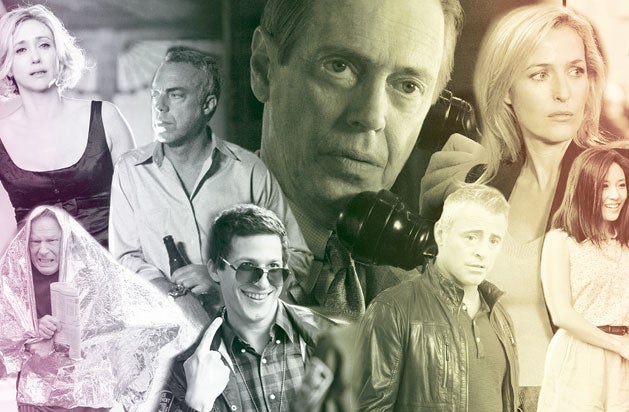 We get it: “Modern Family” is really good. And so are most of the other shows, actors and actresses that seem to land Emmy nominations every year. But TheWrap staff would like to suggest that Emmy voters — famous for being creatures of habit — occasionally take the road less traveled. Here are some of our suggestions.

Vera Farmiga, “Bates Motel”
Few actresses have the opportunity to play such a polarity-challenged TV role as Farmiga does with her Norma Bates–from icky, incestuous hot mess to femme fatale hotness. As the mother-and-son dynamic has intensified on the horror series, her outstanding moments have only gotten better. –Deborah Day

Titus Welliver, “Bosch”
Is there a more durable literary archetype than the hard-boiled, world-weary detective prowling the mean streets of the city? Author Michael Connelly’s Harry Bosch is a fitting successor to Chandler’s Philip Marlowe, and Welliver has exactly the right bruised and battered gravitas in Amazon’s expert adaptation. –SP

“Boardwalk Empire“
The final season of “Boardwalk Empire” was the perfect culmination of 56 episodes of across-the- board artistic excellence. With 40 nominations and 17 wins so far, it’s time the series is finally recognized with an Outstanding Drama Series win. –DD

“Brooklyn Nine-Nine“
The Golden Globes got it right when both “Brooklyn Nine-Nine” and star Andy Samberg were rewarded for the sitcom’s freshman run, but neither were even nominated for an Emmy last year. “Brooklyn” is one of the most consistently funny ensemble sitcoms, with a cast that goes beyond Samberg and Andre Braugher to include the deserving Joe Lo Truglio and Stephanie Beatriz. –Tony Maglio

“Episodes”
“Episodes” soared to new heights of absurdity this season on a new round of humiliations for its main characters: Matt LeBlanc’s preening alter ego suffered a major reversal of fortunes, a story line that gave the former Friends star a chance to show the pathos of an aging sitcom talent, while Tamsin Greig and Stephen Mangan’s perpetually exasperated British showrunners waged a credit battle to comic effect. –Diane Garrett

“The Fall”
Say what you will about “Fifty Shades of Grey,” but it helped call attention to Jamie Dornan’s other role tying up women. In the second season of “The Fall,” a hugely unnerving BBC2 series streamed by Netflix in the U.S., Dornan’s creepy serial killer plays a riveting cat and mouse game with Gillian Anderson’s enigmatic detective. –DG

“Fresh Off the Boat”
It’s been two decades since a major network show about an Asian family has been on the air, but “Fresh Off the Boat” is not just this generation’s answer to “All-American Girl.” It’s a clever, smart and genuinely funny sitcom in its own right, boasting a star-making turn by Constance Wu as the coolest onscreen Asian mother ever. –Linda Ge

Steve Coogan, “Happyish “
Coogan takes a darkly comic role with a troubled backstory — it was to be performed by the late
Philip Seymour Hoffman–and makes it completely, profanely his from the moment he starts ranting about “Mad Men” in the first episode. It’s hard to imagine any other actor humping a Keebler elf quite the way that Coogan does. –DG

“Jane the Virgin”
“Jane the Virgin” has been defying the odds ever since the CW took a chance on the risky Venezuelan telenovela format and cast breakout star Gina Rodriguez in the leading role. Airy and deeply sincere, “Jane” is a charming and sometimes very serious drama that’s not afraid to tackle real- life issues. –LG

Timothy Olyphant, “Justified”
Olyphant’s last season as U.S. Marshal Raylan Givens gives us another chance to reward the actor for his stellar work as a TV lawman. Remember: This guy was Seth Bullock in “Deadwood,” and we neglected to recognize him then, too. –DD

“The Knick”
Steven Soderbergh‘s turn-of-the-century Manhattan medical drama “The Knick” wasn’t as flashy as “True Detective” or “Fargo,” but it was subtle, richly textured and wholly satisfying, with a fabulous supporting performance from Andre Holland as an African-American physician ravaged by the indignities he endures every day. –SP

Kristen Schaal, “Last Man on Earth”
Schaal may seem like an oddball to those unfamiliar with her work on “Bob’s Burgers” and elsewhere. But the voice of “Bob’s” pint-size psychopath Louise Belcher lends depth and nuance to neurotic Carol on “Last Man on Earth,” making her so much more than just the crazy-girl foil to Will Forte’s title character. –LA Ross

Pamela Adlon, “Louie”
With a bark that’s likely worse than her bite, the diminutive yet fiery actress with the New Yawk accent makes the perfect comic foil for Louis C.K. on FX’s misanthropic series. She’s as tough a female character as any on television, and you can tell she wears the pants in the friendship because she usually reduces Louie to a smitten schoolboy in scenes that crackle with both sexual and comedic chemistry. –Jeff Sneider

Tatiana Maslany, “Orphan Black”
Maslany plays clones Sarah, Alison, Cosima, Helena and the others in such seamless fashion on sci-fi thriller “Orphan Black” that you can often forget the same actress is behind all of the vastly different characters. It’s even more impressive when she shares the screen with herself–sometimes more than one of herself. –LG

Nick Offerman, “Parks and Recreation”
“Parks and Rec” hasn’t been gone long, and we’re already missing Ron Swanson. Offerman stole almost every scene that he had a line or a look in, and he was swiping them from a tremendously talented group. Let him ride off into the sunset with an Emmy in one hand and whiskey in the other. –TM

Cameron Monaghan, “Shameless”
“Shameless” may be a showcase for William H. Macy, but Monaghan shines as one of his many troubled children. He balances a gay romance and bipolar disorder in subtle and innovative ways, while still matching the impoverished grit of his on-screen family. –Matt Donnelly

TJ Miller, “Silicon Valley”
Erlich Bachman is one of our favorite characters on TV–a fearless leader, even when he’s leading in the wrong direction. Miller mines the character for comedy gold and invests in every line reading, no matter how ridiculous. –JS

Amanda Peet, “Togetherness”
Make no mistake, Peet did the best work of her 20- year career as Tina Morris on HBO’s “Togetherness,” where she used humor to help us root for an often-shallow Hollywood hanger-on. Peet’s performance shines a light on Tina’s desperate need for acceptance underneath the bravado of her party girl exterior. –JS

Melissa McBride, “The Walking Dead”
Voters need only see two scenes from “The Walking Dead” to understand McBride’s contribution to the hit horror drama as Carol: her final moment with Lizzie and her reintroduction to Rick and Co. at Terminus. Now that her role has been expanded, her performance easily stands up to her competitors in less genre-driven series. –DD