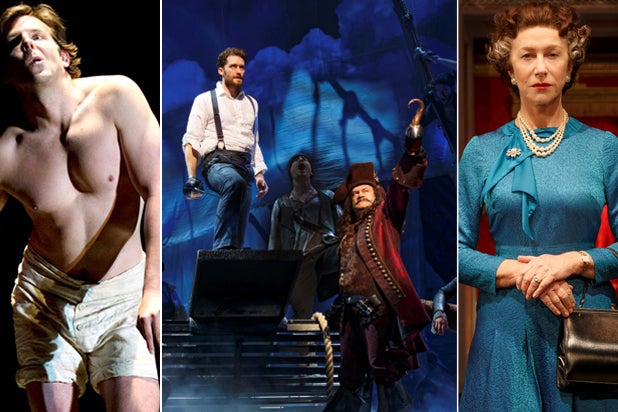 The Tony nominations are announced Tuesday 8:30 a.m. ET, and since it has been a very good Broadway season, the races are much more competitive than usual.

But don’t worry if you’re a potential nominee: To help promote Broadway, the Tonys allow a fifth nomination in some categories. It happened last year when the best play category saw five nominations, and 2013-14 wasn’t a particularly good season for original plays. And due to a new rule change, it looks like some of the acting categories could have six nominations, rather than the usual five.

Which makes for an absurd number of nominations, considering that only 37 shows opened on Broadway this season.

So few shows and so many nominations mean that the Tonys are now less about honoring talent than snubbing talent. So let the bruising begin!

Also Read: 'The Curious Incident of the Dog in the Night-Time' Theater Review: Now on Broadway, Soon to Be a Movie

It’s hard to see any of the following titles not being nominated for best play: Simon Stephens’s “The Curious Incident of the Dog in the Night-Time,” Ayad Akhtar’s “Disgraced,” Robert Askins’s “Hand to God” and Hilary Mantel and Mike Poulton’s “Wolf Hall.” If a fifth nomination materializes, look for it to be Nick Payne’s “Constellations,” although don’t count out Lisa D’Amour’s “Airline Highway,” which, in my opinion, deserves to be among the top four. And Tony nominators might take note of this fact: Regarding Mantel and D’Amour’s work, there hasn’t been an original play written by a woman produced on Broadway since Nora Ephron’s “Lucky Guy” in 2013.

Best musical is the money category, the one that can send a show into the box office stratosphere — or at least prevent it from being a flop. Last year, “A Gentleman’s Guide to Love & Murder” struggled at the box office for months — until it received 10 Tony nominations and then took the top prize.

This year, two non-tourist shows, “Fun Home” and “The Visit,” also need the Tony exposure, and should be nominated for best musical. They will be joined by “Something Rotten!” and “An American in Paris,” with “Finding Neverland” a long shot.

Much more interesting are the categories that lead to a best musical: score and book. Not that winning score and book necessarily guarantees the big prize. Back in 2002, “Urinetown” won for book and score, but lost the best musical award to “Thoroughly Modern Millie.” How does that happen? Blame it on the out-of-town presenters, who invariably vote for a popular show (“Millie,” “Spamalot,” “Kinky Boots”) that will wow their subscribers in the sticks.

Best score is another matter. “American” isn’t eligible, because it features Gershwin music, so that creates an opening for Sting’s “The Last Ship” score, as well as Jason Robert Brown’s “Honeymoon in Vegas,” which could push out Wayne and Carey Kirkpatrick’s “Rotten.” Much more secure bets are John Kander and Fred Ebb’s “Visit” and Lisa Kron and Jeanine Tesori’s “Home” scores. Again, not to overemphasize the female angle, but women rarely win in the writers’ categories. I think they will this year, and it helps too that Kron and Tesori’s work is brilliant.

The lead actor categories are unusual this year, because never have so many jockeyed to be put in the featured category, which is where you might find Tyne Daly (“It Shoulda Been You”), Kelsey Grammer (“Finding Neverland”) and the casts of “Airline Highway” and “Wolf Hall,” the exception being the latter epic’s star, Ben Miles.

For lead actor in a play, Miles leads the pack for no other reason than he’s on stage for nearly six hours. Will the nominators round out this category with movie stars Bradley Cooper (“The Elephant Man”), Jake Gyllenhaal (“Constellations”), Hugh Jackman (“The River”) and Bill Nighy (“Skylight”), all of whom received wonderful reviews and whose presence on Tony night would delight CBS?  Too bad for the producers of the telecast, it’s doubtful that this high-profile quartet is a lock. Look for Steven Boyer (“Hand to God”), Hari Dhillon (“Disgraced”), John Lithgow (“A Delicate Balance”), Alex Sharp (“Curious Incident”) and/or Douglas Sills (“Living on Love”) to cause some disappointment in that film circle. Also, remember last year when Daniel Craig, James Franco, Ian McKellen, Zachary Quinto, Daniel Radcliffe, Patrick Stewart and Denzel Washington all failed to be nominated — and none of them showed up to present!

Also Read: Bradley Cooper in 'The Elephant Man' Offers Gorgeous Along With The Beast

Broadway this season has not been kind to lead actresses. There simply aren’t that many. Look for the nominees to be Helen Mirren (“The Audience”), Elisabeth Moss (“The Heidi Chronicles”), Carey Mulligan (“Skylight”) and Ruth Wilson (“Constellations”), with either Glenn Close (“A Delicate Balance”) or Gretchen Mol (“Disgraced”) taking the fifth.

Musicals have provided more opportunities, as well as Tony competition, for lead actresses, with it already looking like a three-way photo finish between Kristen Chenoweth (“On the Twentieth Century”), Kelli O’Hara (“The King and I”) and Chita Rivera (“The Visit”). Erin Davie and Emily Padgett (“Side Show”) would be strong contenders, if not for the fact that their revival closed after only a few performances, unfortunately. And there’s also Beth Malone (“Fun Home”), who delivers an extremely understated performance, which is rarely the kind of performance that scores in this category, unfortunately. The dancing of Leanne Cope (“An American in Paris”) should bring her a spot in the nominated circle.

Also Read: 'On the Twentieth Century' Theater Review: Kristin Chenoweth Is Back on the Fast Track

The dancing of Robert Fairchild (“American”) is equally good, but he’s in a more competitive category: lead actor in a musical. Michael Cerveris (“Fun Home”), John Cariani and Brian d’Arcy James (“Something Rotten!”), Matthew Morrison (“Finding Neverland”) could fill four slots, leaving it to the nominating committee to choose Fairchild’s ballet moves or go with Tony Yazbek’s hoofing (“On the Town”). Then there’s Roger Rees (“The Visit”), who, like Malone, gives a very subtle performance. Too bad that the Tonys, like the Oscars, often honor the most acting, not the best acting.

Direction of a play generally pits the helmers of original works against those staging a revival. This year, the contest is between big and small, with the advantage going to the directors of such mammoth ensemble plays as “Airline Highway” (Joe Mantello), “Curious Incident” (Marianne Elliott), “You Can’t Take It with You” (Scott Ellis) and “Wolf Hall” (Jeremy Herrin). Will the nominators find more than one slot for the more intimate work involved in staging “Constellations” (Michael Longhurst), “Disgraced” (Kimberly Senior), “Hand to God” (Moritz von Stuelpnagel) and “Skylight” (Stephen Daldry)? It’s expected this category will expand from four to five nominations.

On the musical side, it’s the directors of the revivals “The King and I” (Bartlett Sher), “On the Twentieth Century” (Scott Ellis) and “On the Town” (John Rando) against those doing something new like “Fun Home” (Sam Gold) and “The Visit” (John Doyle) and those directing something merely newish like “An American in Paris” (Christopher Wheeldon) and “Something Rotten!” (Casey Nicholaw). Directors of revivals often have the advantage, since it’s more obvious what they’ve brought to vintage material. Gold is an exception, however; voters can compare his Off Broadway staging of “Home” last year with his new uptown staging in-the-round. Direction of a musical often means choreographing lots of actors, sets, and costumes. Gold shows how less can be equally dazzling.