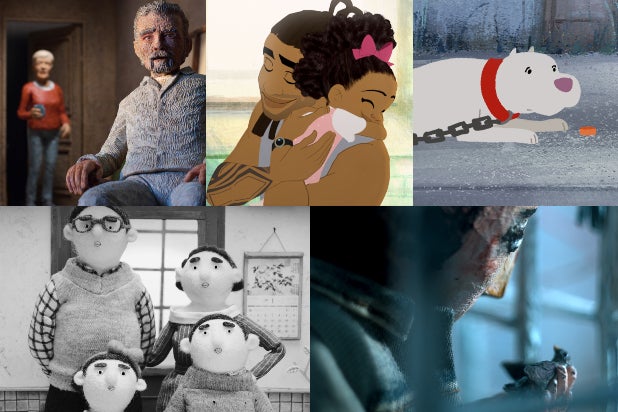 And since all of this year’s nominees are all genuinely short — the longest tops out at just under 15 minutes — the theatrical release of the Oscar-nominated animated shorts by ShortsTV is accompanied by four additional “Highly Commended” works of animation. At least one of the additional films probably deserved a nomination too.

The animated short that most audiences are probably familiar with is Matthew A. Cherry, Everett Downing Jr. and Bruce W. Smith’s “Hair Love,” which originally premiered in front of the blockbuster “The Angry Birds Movie 2.” The film is about an African American father trying to style his daughter’s hair, which turns out to be an unexpectedly comical, Herculean effort.

Beautifully animated, with a keen eye for character and mild exaggeration, “Hair Love” is a tender film about the overwhelming significance of seemingly small parts of our lives. The conclusion is genuinely beautiful and bittersweet but doesn’t resort to maudlin sentimentality or worse, cheap melodrama. It’s a short designed to make people feel better about themselves and to tell a kind story about a delightful family. It’s not designed to traumatize you emotionally.

The same cannot be said about the rest of the nominees this year, which tackle serious topics like death, neurodegenerative diseases and animal abuse. Some of these shorts are excellent, some come up short (ahem), but they’re all explicitly trying to put the audience through the wringer.

Siqi Song’s exquisitely animated “Sister” tells the story of a man’s childhood in China in the 1990s. His younger sister, who took up too much space — literally, she inflates to the size of the room — and always fought for the remote control. The ending of the short film may come as a surprise to some audience members, but anyone who knows about Chinese policies will probably be able to see where “Sister” is heading, and they would be wise to get the tissues handy.

Also Read: Oscars to Include Kobe Bryant Tribute During Broadcast

The stop-motion animation in “Sister” comes to life via felt puppets, giving the film a distinctly delicate, soft aesthetic that plays beautifully into the short’s sensitive and vulnerable themes. At best it’s a heartbreaker, but at worst it gives rather little context to its story and could perhaps mildly confuse audience members with limited knowledge of Chinese politics.

Another stop-motion animated film about family and heartbreak, Daria Kashcheeva’s “Daughter,” tells the story of a dying father and his emotionally distant child. Stunningly animated with expressionistically painted, moody puppets, Kashcheeva’s film lures you into its mournful world quite easily. Unfortunately, once there, the motivation for the characters’ estrangement seems frustratingly thin given its lifelong impact. The marriage of style and material is too uneven for the film to make its maximum impact, but it’s an astoundingly stylized work of animation even in a vacuum.

A third animated short about family strife, told through expressionistic stop-motion, tells the story of a painter whose mind is deteriorating and can no longer recognize familiar objects or his wife’s face. Bruno Collet’s “Memorable” uses the three-dimensional representation of a painter’s work to craft a world where everything is a matter of personal perception, and as that perception goes, so too does everything else.

“Memorable” is tragic and lovely, but one cannot help but be reminded of last year’s extremely similar Oscar-nominated animated short, Louise Bagnall’s “Late Afternoon,” which also entered the swirling mind of a person suffering from neurodegenerative disease and was, perhaps, a little more deft at tugging the heartstrings.

But if any of this year’s nominees are going to make you cry, it’s Rosana Sullivan’s impeccably animated “Kitbull,” about a little black cat who befriends a pitbull that’s being trained to fight by an abusive master. The animal performances captured in “Kitbull” are uncannily specific and innately powerful, and the film’s simple, potent storyline is sad and beautiful simultaneously. Parts of the story may be upsetting for some viewers, but the overall experience is lovely. It’s an absolutely wonderful work of animation.

After watching this many emotionally overloading animated shorts you could probably use a laugh. Léo Brunel and Loris Cavalier’s knee-snappingly hilarious short “Hors Piste” is just the ticket. Presented like a 1980s television series about helicopter rescues, the short takes a hard right turn very quickly, when the helicopter falls off the mountain and the heroic pilots have to work their way down with an injured man on a stretcher, who gets used to solve their problems in heartless, ludicrous ways.

The constant juxtaposition of the apparent “heroism” of these jerks, as they callously climb over the injured man like a bridge, or plunk him down in the snow like a pair of skis while they warm themselves, never stops being funny. “Hors Piste” is comedy gold, and it seems a pity that such an expertly crafted film didn’t make it into the ranks of this year’s official nominees.

The other “Highly Commended Films” are all masterfully animated, but it’s relatively easy to see why they didn’t make the final cut. “Maestro,” directed by Florian Babikian, Victor Caire, Théophile Dufresne, Gabriel Grapperon and Lucas Navarro, is an extremely short film about a group of forest animals who perform an opera. Like a CG-animated “Merry Melodies” short, this plotless film relies on the visual contrast to get its belly-laughs. It’s an admirable work but so brief that it doesn’t leave a lasting impression.

Rachel Johnson’s ambitious stop-motion animated short “Henrietta Bulkowski” has the most impressive Hollywood pedigree of any film in the program, with voice-acting by Christina Hendricks, Chris Cooper and Ann Dowd. It’s the story of a woman with a mysterious growth on her back, which keeps her perpetually looking downward, and whose doctor refuses to give her medical permission to learn how to fly. So she decides to repair a broken aircraft in a junkyard to pursue her dreams.

“Henrietta Bulkowski” features excellent character animation and vivid environments, and its story is clearly well-intentioned, but the film’s ultimate conclusion steps out of the realm of sentimentality and winds up knee-deep in predictable schmaltz. It’s not the only film in the program where the animation is superior to the story, but its relatively long length compared to the other films on the program makes the issue more apparent.

Case in point: Carol Freeman’s gorgeously painted “The Bird and the Whale,” about a young whale who gets separated from his pod and befriends a caged bird floating in the sea after a shipwreck. The film’s rich colors and innocent character designs create a profound connection with this two mismatched friends, but the story culminates in a way that’s not merely sad, it’s a little aggravating and seems to leave the audience with an unfortunate or at least undeveloped message. It’s one of the most beautiful shorts in the program, but it doesn’t leave the greatest impression.

Though this year’s animated shorts program is a bit of a mixed blessing, the nominees are each impressive on a stylistic level, and the handful that truly excel at blending form and function are absolutely delightful. Funny and sad, profound and frustrating, they represent an impressive gamut of varied filmmakers making grand attempts to entertain and, at their most ambitious, to make a deeper connection to your soul. That some of them succeed is a miracle. That the rest could come so close is, frankly, a miracle too.