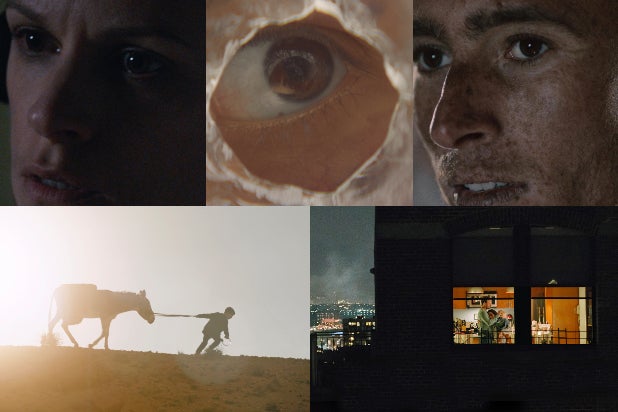 It’s nothing less than astounding — in an era where films as short as an early Lumière Brothers reel can capture the cultural imagination on a daily basis — that live-action short films are rarely given their due as an art form. The typical moviegoer probably hasn’t seen any of the live-action short films nominated for an Academy Award this year, which is a pity, because as always they are missing out on striking, deft, thoughtful, and sometimes very funny films.

At least audiences will have an opportunity to explore the Oscar-nominated live-action shorts when ShortsTV releases all the short-subject nominees in their own, separate programs. It’s an opportunity for films from across the globe to share the silver screen, bringing filmmakers and audiences close together, sharing experiences of strife and wonder, and reminding us all that humanity is a collective, not singular, concept.

None of the nominees embrace this philosophy more directly than Marshall Curry’s “The Neighbor’s Window,” in which a middle-aged couple juggling three children become mildly obsessed with the younger, more sexually active couple living across the courtyard. Alli (Maria Dizzia, “13 Reasons Why”) and Jacob (Greg Keller) are displeased but fascinated by their neighbors’ carefree juxtaposition to their own, seemingly humdrum lives, and yet fate has other plans for everybody, as one might expect.

“The Neighbor’s Window” culminates in new perspectives and teary-eyed sentiment, and its heart is clearly in the right place, but compared to the other Oscar-nominated live-action shorts — which have darker depths to plumb, and more harrowing drama to unfurl — it can’t help but seem mildly contrived. The rarely-discussed tragedy of the Oscar-nominated short-films programs is that although each of these films stand out in their own way, they were never intended to be shown together, and a film like “The Neighbor’s Window” is more effective in a vacuum than when it’s placed side by side with more emotionally, psychologically and socially ambitious works.

For instance, “Brotherhood” tells the unsettling story of a Tunisian family that is upended when the eldest son returns, one year after joining ISIS, with a new and disturbingly young bride. The boy’s father, disapproving of his son’s new life and desperate to protect his other children from his influence, has a terrible choice to make: Betray his oldest son and turn him in, or risk the rest of his loved ones by letting a wanted criminal stay with the family.

Narratively direct but undeniably effective, Meryam Joobeur’s drama condenses a feature film’s worth of internal conflict into a fiercely efficient gut-punch of a short. Within just 25 minutes, “Brotherhood” explores the complex emotions that spring from a seemingly impossible situation and ultimately concludes with heartache and hard-earned ambiguity.

A far more whimsical short film, Yves Piat and Damien Megherbi’s “Nefta Football Club,” also takes place amongst a Tunisian family struggling to get by in a time of moral turmoil. Two young boys stumble across a mule in the desert, which is wearing headphones and lugging many bags of a mysterious white powder which, the elder brother tells his young sibling, is just laundry detergent.

Of course, that’s no ordinary laundry detergent, and the dollar signs in the older brother’s eyes are practically visible from space. Piat and Megherbi’s fast-paced and nimbly plotted comedy brings the children close to danger but is far more invested in the idea that, to children, the evils of the world aren’t complicated. If you value more than money, money isn’t much of a temptation, which at least one of the characters in “Nefta Football Club” learns to their chagrin and the audience’s moderate amusement.

A different kind of sibling relationship emerges quite unexpectedly in Delphine Girard’s “A Sister,” as a woman who has been kidnapped by a deranged man convinces him to let her call her sister. Instead, she calls emergency services, where the operator has to have an increasingly tense one-sided conversation with her new “sister” in order to save her life.

“A Sister” excels at claustrophobic, almost hyper ventilatory suspense, and the performance by Veerle Baetens (“The Broken Circle Breakdown”) is a masterwork of personal engagement, barely obfuscated by responsibility and professionalism. But the real-time storytelling and the vagaries of the villain’s motivation make it seem doubly implausible that he would allow his victim to spend so much time on the phone. It’s an efficient thriller, but compared to other Oscar-nominated short films from recent years about one-sided life-or-death telephone calls (specifically 2015’s heartbreaking “The Phone Call” and 2019’s nerve-shredding “Mother”), it doesn’t pack quite the same wallop.

Bryan Buckley’s “Saria” doesn’t seem to be pulling any punches. It’s one of this year’s standouts, telling the story of a real-life mass escape from a shockingly abusive orphanage in Guatemala which had even more horrifying consequences. Saria (Estefanía Tellez) is the mastermind behind the escape, who enlists the aid of another young girl with whom she has a close bond, as well as a young boy who could come between them.

Structured like a prison break but releasing with a righteous fury, “Saria” becomes an undeniably forceful motion picture thanks to Buckley’s piercing imagery, first-person fleeing and unexpectedly brash revelations of abuse. Its energetically angry presentation seems wholly just, and largely free of cheap maudlin melodrama or “gotcha” playfulness. It’s a bitter tragedy, impressively performed and visualized, that leaves a hole in your heart.

Individually, even the most artificial of this year’s Oscar-nominated live-action shorts boasts tender intentions. The rest are effective stories, told with varying degrees of emotional heft and a clear understanding of suspenseful genre storytelling. And they are absolutely worth viewing on the big screen, along with all the other deserving Oscar nominees.