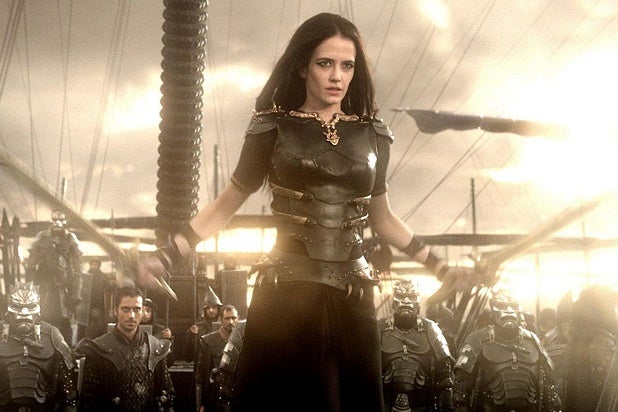 Over-the-top ancient Greek battle gore and the sultry heroine Eva Green powered “300: Rise of an Empire” to the No. 1 spot at the domestic box office with a $45 million opening weekend.

The R-rated sword-and-sandals saga held off the challenge of a very different history trip, “Mr. Peabody & Sherman,” the DreamWorks  Animation family film about a time-traveling genius dog and his young charge that debuted with a better-than-expected $32.5 million.

The two wide openers dropped the Liam Neeson jetliner thriller “Non-Stop” out of the top spot and into third with $15.3 million. “The Lego Movie” was fourth with $11 million, beating out the Bible epic “Son of God,” which took a tumble in its second week and finished with $9.7 million.

The limited debut of writer-director Wes Anderson‘s “The Grand Budapest Hotel” nearly stole the show however, with an estimated $800,000 from four theaters. That’s an eye-popping average of more than $200,000 per screen for the Fox Searchlight comedy, one of the best specialty openings ever.

The opening of Warner Bros. and Legendary Pictures’ “Rise of an Empire” doesn’t match the first weekend of the original “300,” but it’s impressive given it’s been seven years since the Zack Snyder-directed original landed with a stunning $70 million in March of 2007. Snyder wrote and produced this one, which stars Sullivan Stapleton and Green and is directed by Noam Murro, and focuses on a fierce sea battle between the Greeks and invading Persians.

Many of the 3,470 theaters screening “Rise of an Empire” featured 3D and its was on 343 Imax screens as well, and ticket up-charges gave a boost to the film, which has the same ultra-stylized look of “300.” The 3D showings accounted for 63 percent of the grosses, Imax theaters provided 15 percent of the haul and premium large format screens brought in nine percent.

The critics beat up “Rise of an Empire” but its fanboy dominated audience, which skewed 62 percent male, gave it a “B” CinemaScore.

Warner Bros. is counting on “Rise of an Empire” to be a global hit and it delivered, taking in $87.8 million from debuts in 58 foreign markets. That’s 10 percent better than the comparable rollout of the original film, Warner Bros. said.

The opening of “Mr. Peabody” topped analysts’ projections and is better than the first weekends of “Turbo” ($21 million last August) and “Rise of the Guardians” ($23 million). But it’s down from other DreamWorks films that launched in March, including 2013’s “The Croods” ($43.6 million) and 2010’s “How to Train Your Dragon ($43.7 million).

It played to an audience that was 56 percent female and 52 percent over the age of 25 — high for a family film. They loved it, and gave it an “A” CinemaScore, in line with the critics.

“I think it worked as a family film and a general release,” Fox’s head of distribution Chris Aronson told TheWrap. “Normally there’s a a ‘nag factor’ with family films, where the kids say they want their parents to take them to see it,” he said. “But this time, with the great reviews and the nostalgia factor, there was no resistance from parents. They wanted to see it too,” he said.

“Peabody” is based on a cartoon segment of the 1960s TV show “Rocky and Bullwinkle,” and the executive producer is Tiffany Ward, the daughter of  Jay Ward, one of the show’s creators.

“300: Rise of an Empire” and “Mr. Peabody & Sherman” are the two most expensive movies to come out so far this year. The production budget on “Mr. Peabody and Sherman,” which Fox is distributing as part of its deal with DreamWorks, is estimated at $120 million, and “Rise of an Empire” cost nearly $110 million.

The solid showing by “Peabody” (which distributor Fox had in a market-high 3,934 theaters) came despite the presence of “The Lego Movie,” Warner Bros.’ animated hit that is still in 3,290 theaters. “Lego” brought in $11 million in its fifth week, upping its domestic total to $225 million — with more than $346 million worldwide.

“The Lego Movie” beat out Mark Burnett’s Biblical saga “Son of God,” which took a a whopping 70 percent drop from its big opening last week. The pared-down version of the History Channel miniseries “The Bible” is up to $45 million domestically for Fox.

Fox Searchlight added 654 theaters for its Oscar Best-Picture winner “12 Years a Slave,” and the film cracked the top ten with $2.1 million from 1,065 locations. “12 Years” has taken in more than $53 million domestically and another $90 million overseas.