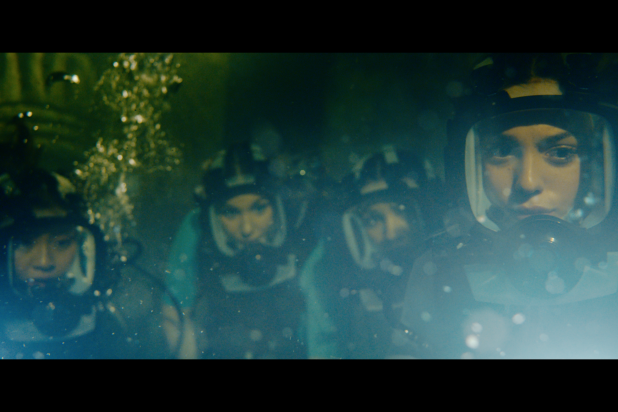 Returning to the well — or in this case, a submerged cave system — for his second film in which thrills are in more abundant supply than oxygen, Johannes Roberts reconfirms the enduring dramatic alchemy of a hungry shark and a smorgasbord of delicious-looking people with his skillful, handsomely-mounted “47 Meters Down: Uncaged.”

Spiraling off from his 2017 predecessor to tell a new story in what quite possibly could become a next-generation “Jaws” anthology, Roberts populates convincingly elaborate underwater sets with a suitably appealing cast for a claustrophobic adventure that manages to deliver some real terror before it somewhat inevitably levels up into absurdity.

Sophie Nélisse (“The Book Thief”) plays Mia, a high-school outcast whose harassment by bullies tests her relationship with stepsister Sasha (Corinne Foxx, daughter of Jamie) after their parents move to Mexico for their dad Grant’s (John Corbett) job as an explorer of underwater cave systems. Sneaking off with Sasha’s friends Alexa (Brianne Tju, MTV’s “Scream”) and Nicole (Sistine Rose Stallone, daughter of Sylvester) to party in a remote lagoon that Grant’s teenage assistants told them about, the foursome discovers not only that their isolated getaway is the entrance to an ancient underwater tomb, but conveniently there are also enough masks and diving equipment for them to take a swim in the nearest chamber.

Venturing into the ruins, the girls quickly encounter some remarkable, mysterious creatures — including an albino shark that doesn’t need sight in order to hunt them in the water. But after an attack disrupts the delicate, aging rock formations, trapping them inside with the enormous predator, the girls are forced to swim deeper into the maze-like network of tunnels in the hopes of finding an escape route before either the shark or a lack of oxygen turns this amazing discovery into their final resting place.

In the opening scenes of the film, it isn’t really clear why all of the teens in a Mexico-set locale go to a conspicuously English-language school, or why Mia, just as fresh-faced if only slightly more introverted than the rest of her classmates, is a designated target for bullying. But in a movie where sharks can repeatedly knock down thousand-pound rock formations by thrashing around, one supposes these are minor quibbles, especially when director Roberts, who co-wrote with Ernest Riera (“The Other Side of the Door”), creates what develops into a genuinely suspenseful and astonishingly well-executed series of underwater set pieces.

There’s something slightly amusing about the fact that a movie like this, where audiences scarcely pause to consider the concept or how it’s executed, arrives just days after the 30th anniversary of “The Abyss,” a movie that required James Cameron literally to develop technology in order to pull off its notoriously difficult shoot. But Roberts mounts a really impressive underwater production that mostly minimizes the premise’s logistical implausibilities and instead showcases what filmmakers can do when they commit to the challenge of telling a story like this.

That said, Roberts errs on the side of excess when it comes to the albino great white terrorizing the four girls and the handful of other explorers they encounter while in the caves; notwithstanding a couple of effective jump scares, the shark too often seems either like a circling, Universal Studios-style automaton or a creation of pure CGI. But again, the ticking clock of the young women’s respective oxygen tanks, and the temporary solutions they find while searching for an exit, ratchets up more than enough suspense without throwing a bloodthirsty man-eater into the mix.

Nelisse’s Mia is, for better or worse, the kind of female protagonist that filmmakers seem increasingly obligated to create — “different” from her counterparts in the film, but gifted with a hidden wealth of relevant skills that she coincidentally developed earlier as an outsider. Then again, if it weren’t for a finale that feels compelled to tie together thematic threads while resolving the characters’ more immediate physical dilemmas, she wouldn’t materially have more to do than her co-stars.

Although Roberts uses masks that allow us to see the four teens’ faces while they freely communicate with one another, once they’re trapped in the bowels of an underwater tomb, the quartet is mostly interchangeable. Meanwhile, Corbett and Nia Long, playing Mia and Sasha’s parents, lend the production a welcome, grounding influence that feels palpable even once people start getting stuck in a shark’s teeth.

Ultimately, as a delivery system for jump scares, Roberts’ sequel is not as deliberately (or effectively)  grounded as Alexandre Aja’s recent, surprisingly tense “Crawl,” but it manages nevertheless to provide a satisfyingly updated exploration of the conventions that Spielberg tapped into almost 45 years ago with “Jaws.” Of course, the big problem back then was that the shark never worked, and the filmmakers had to come up with a way to make more suspense out of less screen time.

But even in an era where more is more — and the resources Roberts has are greater than Spielberg ever could have imagined — “47 Meters Down: Uncaged” feels, with a few exceptions, like a surprisingly balanced meal, one that whets the appetite for more, assuming the ideas for future films are as tantalizing as this one.