Trick or treat, give me messy media to eat.

Luckily for digital natives, you’re treated to the horror show TV, web and social media can provide all year round. So it is on Halloween, TheWrap builds its own media horror house, with a mix of five goblins, zombies and scarecrows.

Enter at your own risk.

Trump’s daily antics — from degrading decorated war veterans to branding Mexican immigrants as drug lords, murderers and rapists on day one of his campaign — have thrown scares into not a few unwitting victims.

But after careful consideration and many sleepless nights, the most horrible Trump-ism of 2015 goes to the Donald channeling his inner “True Blood” at Fox News’ star Megyn Kelly’s expense.

political and media punditariat predicted that the shocking, vile comment would spell the end of Tour de Trump — not so.

He skyrocketed atop the GOP presidential polls, staying there for two months until Dr. Ben Carson recently toppled him in Iowa and some national polls.

On Fox News, an immigration segment quickly turned into a get-your-popcorn battle that reached its apex when Geraldo Rivera threatened to knock out co-host Eric Bolling.

Rivera sparked the fight when he accused his “The Five” co-panelists of exploiting the death of a young woman in San Francisco to cast all illegal immigrants as murderers.

“From a guy who exploits and sensationalizes everything,” Bolling shot back, which set the selfie-stud off. “You’re lucky that you’re my friend; I’d knock you out right now,” an enraged Rivera shouted.

“What do you do? Where do you get your stuff from … what right-wing pundit is giving you your crap?”

Cooler heads prevailed as Kimberly Guilfoyle urged the control room to go to commercial, but the damage was done and the Geraldo-Bolling bromance was forever tarnished.

The paper of record has long been criticized as a mouthpiece for liberal othodoxy, so dropping F bombs on a member of the GOP’s preeminent dynasty probably didn’t help its marketing efforts.

“Fuck you Jeb Bush for telling poor people they need stronger families to not be poor. Poverty weakens families,” news assistant Phillip B. Richardson tweeted in October before quickly deleting it.

The Times cleaned up the horror show, calling the tweet “completely inappropriate” while noting that Richardson is a clerical staffer. “Managers will take the necessary steps to deal with the situation.”

Then there was a story on Donald Trump’s “Silent Partner” — wife, Melania. Any reporter can make a mistake — I’ve made plenty — but five corrections in one story is pushing it for the Times.

Errors ranged from misspelling Rupert Murdoch’s wife’s name, to getting wrong the age at which Melania modeled for Talk Magazine, to identifying Sen. Marco Rubio as a congressman. Finally, the Times revealed its secret endorsement of Ben Carson for the Republican nomination, labeling him the nominee three months before the first primary in an October story. 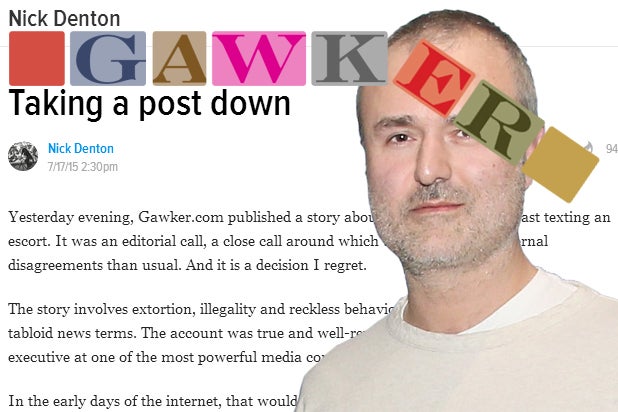 When Gawker crosses the line, you know what’s about to come might just be too grizzly to watch.

“The point of this story was not in my view sufficient to offset the embarrassment to the subject and his family,” Gawker founder Nick Denton wrote before taking down the story. Staffers revolted over the move, highlighted by the resignation of editor-in-chief Max Read and executive editor Tommy Craggs.

In response to the exodus, Denton declared the Gawker Media that observers knew and loved (or hated) dead. In its place, a more mature, “20 percent nicer” version would serve as media’s premiere rabble-rouser, but avoid tossing journalistic ethics to the wolves.

5. Ann Coulter Is No Longer Invited to My Passover Seder

Ann Coulter has made a career of teetering on the line and gleefully offending multitudes, but a series of tweets might have permanently turned off Jews and Israelis.

“How many f—ing Jews do these people think there are in the United States?” the conservative pundit tweeted during the second GOP presidential debate to display her indignation over the number of one-liners candidates delivered in deference to Israel.

Good grief! Huckabee is running for PM of Israel.

Cruz, Huckabee Rubio all mentioned ISRAEL in their response to: “What will AMERICA look like after you are president.” — Ann Coulter (@AnnCoulter) September 17, 2015

Christie also talks @ Israel in response to the question: What will AMERICA look like after you are president?