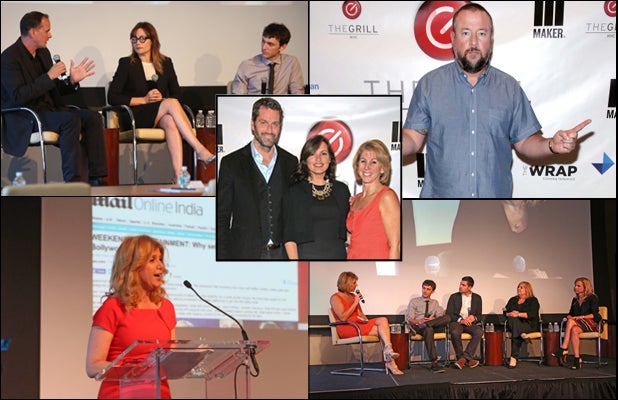 TheGrill NYC conference at the Time Warner Center on Thursday brought together brand leaders with content creators for our first high level conversation around the future of branded entertainment. Executives across the spectrum from companies like Unilever, Paramount, Maker Studios, Pepsi, Vimeo, Red Bull Media, Chipotle, Funny or Die and Vice brought their most innovative campaigns and strategies to the stage.

You can find full coverage here, but here are five of my top insights from the day (videos to go online shortly):

1. Vice thinks it’s worth more than $2 billion. The founder and CEO of Vice Shane Smith spoke candidly about his plans for his rising media company and let’s just say he’s thinking about world domination. Never shy, Smith confirmed that he was in negotiations to do a deal and did not

deny reports that he’s talking to Time Warner to take a major stake in the company. Nor did he deny that taking over a channel like HLN — which would make sense if Time Warner bought half the company — was of interest. When I asked him if he thought the company was worth more than $2 billion — double the valuation he got last year when 21st Century Fox took a small stake at $1.4 billion — he flatly said, “Yes.” He revealed that Vice’s revenues this year will be $500 million. That’s no small chunk of change for a media company that once hoped it might be as big as a competing skinhead ‘zine.  Smith talks big, but thus far he’s delivering on his bravado words. Watch this space.

2. Red Bull Media House is spawning imitators. The energy drink took a big risk in 2011 in launching a full-blown media company meant to become an authentic producer of content and a profitable company in its own right. “It was daunting,” admitted Werner Brell, the head of Red Bull Media House USA at TheGrill. Three years in, Red Bull Media House is a model for other brands looking to create entertainment that delivers on the value proposition of their brand. Red Bull has an extreme sports series on NBC, streams content online at a stunning rate and collaborates constantly with top music talent who record at its cutting-edge studio in Santa Monica.

Chipotle’s Mark Shambura, who at TheGrill discussed his company’s “Farmed and Dangerous” comedy series on Hulu, shared that he’s been inspired by Red Bull’s bold approach and is inclined to take Chipotle in that direction. Or perhaps I should say “further” in that direction. The Hulu series underscored his company’s commitment to environmentally safe farming but did not feature any direct brand integration.

Also read: TheGrill NYC: Red Bull Wants You to Stop Thinking of It as Just an Energy Drink Company

One of the conference attendees asked if the Red Bull model was going to make traditional marketing obsolete. Probably not tomorrow, but that kind of thinking clearly has Madison Avenue nervous.

3. Lessons from “Anchorman 2”: Brands have to forge paths outside the confines of the content space. The team behind one of the most successful branded integrations in recent years, the Ron Burgundy and Dodge Durango  spots that promoted both the film and the car (Paramount came to TheGrill with a hilarious mash-up reel), reaped the payoff when brands take a risk and place themselves in the hands of artists who know what they’re doing. Will Ferrell and Adam McKay took the Weiden and Kennedy concept and ran with it, with no interference from Dodge, even though they were making car commercials. Their freewheeling spots were on TV, went viral on Funny or Die and spawned a tsunami of free media coverage.

Also read: TheGrill NYC: How ‘Anchorman 2’ and Dodge Made the Most Perfect Piece of Branded Content

LeeAnne Stables from Paramount,  a prime mover in the campaign, underscored that plunking products in movies doesn’t work all that well. But what worked brilliantly in this case was taking the content theme — the character — and building a campaign outside the movie. This created its own excitement around that content, and drew attention to the car and the movie. It’s more work, but — duh. That’s why it paid off.

4. The smartest brands are focused on core value rather than products — hence content. Over and over speakers from the top brands — Unilever, Chipotle, Pepsi — said they were focused on finding storytellers who would connect with their core values and leave the hard sell out of it. In Dove’s case it was how to tell women that they should perceive themselves as beautiful when most don’t. In Intel’s case on Vimeo, it was demonstrating how their software meaningfully changes the lives of its users.

To do this, marketers have to go to a very uncomfortable place — their gut — that once upon a time was at the heart of making great entertainment. Marketers have to perform to metrics; Dove does need to sell more soap, Pepsi more drinks, Chipotle more Mexican grill. Great branded integration campaigns do that — it’s just really, really hard to prove it. So those choices are being made on belief rather than hard proof.

5. Consumers put their passion for entertainment on par with their own lives.  The research released at TheGrill Thursday by Edel

man PR and their branded content division Matter had a boatload fascinating insights (one little one: when asking consumers to name their top 10 media companies they now list Netflix among the top 3, when four years ago it wasn’t even on the list).

Edelman focused on the finding that consumers are now putting themselves at the center of their entertainment experience, the “selfie” phenomenon taken to its logical conclusion.

Also read: How Advertisers Must Adapt in the ‘Era of the Selfie’ (Exclusive Study)

But I found a couple of more subtle results even more revealing, especially for the entertainment business. When asked, consumers said the content they are most often likely to share are their personal lives — no surprise there — and entertainment. Both of those categories of content were on par as the content users most loved to share.  What this means is that entertainment occupies as important a place in the lives of consumers as their own personal experiences. If Hollywood needed validation that the stories that content creators tell matter deeply to their fans, here it is.