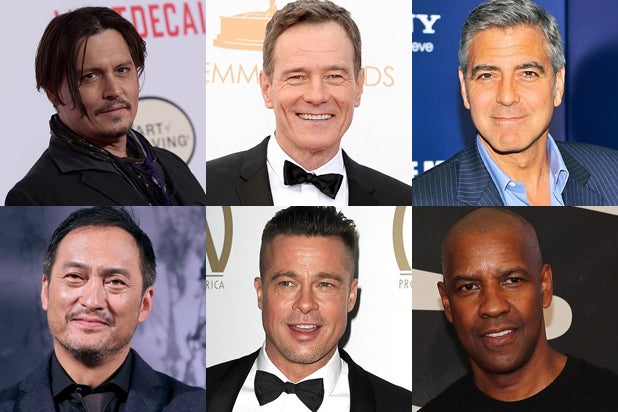 Johnny Depp could be considered one of Hollywood’s biggest stars on the planet, but he hasn’t had a hit at the box office in ages and “Mortdecai” has just been added to the list of bombs.

The actor plays the Wolf in Disney’s ensemble musical “Into the Woods,” but his last leading man hit was 2011’s installment of “Pirates of the Caribbean.” Last year’s “Transcendence” fizzled, as did 2013’s “The Lone Ranger” and “Dark Shadows” in 2012.

But to be fair, the aging movie star is hardly the only famous actor whose name may no longer be enough to guarantee box-office success. Depp, at age 51, could learn a thing or two from some of his fellow actors over 50, who are finding other, perhaps innovative ways to flex their movie-star muscle other than laying it all on the line for box-office returns.

Here are five ways actors over 50 are diversifying their portfolios and proving their staying power:

1. Move behind the camera
Brad Pitt (51) and George Clooney (53) may endure their Sexiest Men Alive titles with good nature, but the two actors have always been serious about filmmaking and are much more active behind the scenes these days. Clooney is a prolific director who can attract any number of his A-list friends to appear in his movies, while Pitt has become a producer with a refined taste, who was behind last year’s Best Picture Oscar-winner “12 Years a Slave” and this year’s Best Picture-nominee “Selma.”

Pitt is still pretty bankable, with recent hits like “World War Z” and “Fury” making money back for himself and his fellow producers, but even he can stumble. So his behind-the-scenes jobs keep him on top of his game even when acting gigs turn out to be duds like “The Counselor” and “Killing Them Softly.”

Clooney is equally prolific behind the camera and recently took home a Best Picture Oscar for producing Ben Affleck‘s “Argo.” Even if “Tomorrowland” doesn’t make back the hundreds of millions of dollars it took to produce, Clooney will continue to direct, produce as well as star in films. He next appears opposite Julia Roberts in Jodie Foster-directed financial thriller “Money Monster.”

2. Get a TV gig
The rivalry between film and TV grows ever stronger, and more and more actors are finding fulfillment on the small screen. An actor like Bryan Cranston (58) successfully relaunched his career thanks to his popular, critically acclaimed run on “Breaking Bad,” after which he went on to land leading movie roles, while a decades-long movie star like Alec Baldwin (56) can also enjoy a career resurgence thanks to something like “30 Rock” and garner more fans than ever. Kevin Spacey on “House of Cards.” Jeff Daniels doing “The Newsroom.” The list goes on and on.

3. Develop a niche brand
Denzel Washington (60) never ventures far outside of doing what he does best.

“Some stars are still able to chose time after time, projects that keep them in the sweet spot of the audience’s comfort zone and thus keep their star power burning bright and Denzel Washington is a great example of that,” Rentrak senior media analyst Paul Dergarabedian recently told TheWrap.

There are actors who will continue to do their own thing, no matter the box office or critical reception, and people like Bill Murray (64), Christopher Walken (71) and Samuel L. Jackson (66) will always be able to survive thanks to knowing exactly who they are and sticking to what they want to do. They might be unpredictable in their decisions, but that’s part of their charm.

4. Show ‘em something new
A breakout role is a breakout role, even when you’re over 50. J.K. Simmons (60) probably couldn’t have predicted “Whiplash” would launch him into his first Oscar race after decades acting in projects big and small, but he’s riding a nice wave of kudos and told TheWrap he’s already getting more scripts and offers than ever before.

Steve Carell led a successful career with a particular brand of awkward comedy, especially on NBC’s “The Office,” but he showed audiences something new by going dark and twisted in Bennett Miller’s “Foxcatcher.” It earned him his first Oscar nomation, at the age of 52.

Also Read: 6 Reasons Actresses Over 40 Are Hotter Than Ever in Hollywood

Harrison Ford has embraced his age, left his action hero days behind, and has developed a new career trajectory playing mentor roles in films like “42.” And on the opposite end of that spectrum is Liam Neeson, who was 56 when he played an unlikely action hero in “Taken,” and became a bigger star than ever. He’s 62 now, and still kicking ass, on screen and at the box office.

5. Stick to supporting roles
Hollywood will never run out of roles for respected character actors like Stanley Tucci (54), Greg Kinnear (51), Paul Giamatti and the like. Barring a Simmons-style breakout or spectacular flame-out in the other direction, prolific, veteran actors will always have steady work and have the respect of their peers and fans. Also, lower-profile actors have an easier to time going from film to TV and back again and, as mentioned above, TV is becoming a big part of staying relevant for stars who may be losing their bankability on the big screen.