“Rogue One: A Star Wars Story” is mostly being praised by critics, with a 85 percent fresh rating on Rotten Tomatoes — however, there are still 37 negative reviews.

Nay-saying critics are criticizing the film’s need to be too much of a “Star Wars” film, trying to play up the nostalgia by introducing characters and plot points from previous films. It becomes repetitive and unoriginal, some critics said.

TheWrap’s film critic Alonso Duralde agreed in his review: “‘Rogue One: A Star Wars Story’ is for the fans, all right, but in that expression’s worst way. Unless you’re thrilled by the idea of 133 minutes of sideways mentions, shout-outs and straight-up references to the original ‘Star Wars’ (or ‘Episode IV: A New Hope,’ for those born after 1977), there’s not nearly enough excitement going on here, much less character, plot or story.”

See six problems critics had with “Rogue One” below.

1. It Relies Too Much on Needing to Be a “Star Wars” Movie 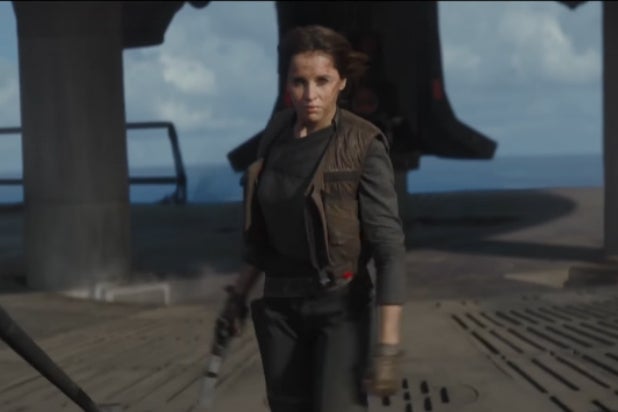 “It’s easy to enjoy a ‘Star Wars’ film just because it’s a ‘Star Wars’ film. You could gleefully watch paint dry so long as the camera pans back from the wall to John Williams’ score, an AT-AT walker’s legs trampling in front of it as a Stormtrooper complains to another on his rotation about the state of the Imperial canteen food. There’s a comfort in being in the ‘Star Wars’ Universe and you immediately feel a renewed affection for it upon re-entry.

But a ‘Star Wars’ film shouldn’t rely on its ‘Star Wars’-yness. It was permissible for ‘Episode VII: The Force Awakens,’ the goal of which was chiefly to announce “we’re back!”, but ‘Rogue One’ – the franchise’s first standalone film – had an opportunity to be different.”

“It comes across as an assembly-line product, an elaborate but fairly conventional action-adventure movie too dependent for its effect on references to earlier entries in the series.”

Also Read: 'Rogue One': 10 Facts You Might Not Know About the Death Star (Photos) 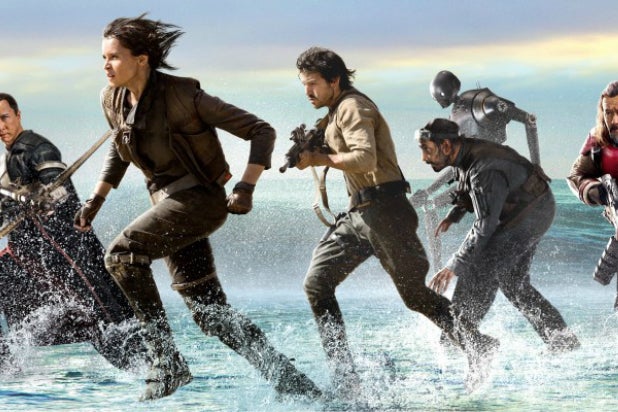 “As leaders of the rebel group, Felicity Jones and Diego Luna seem lost, while Forest Whitaker chews the scenery as a veteran of the Clone Wars who has turned into Colonel Kurtz; Mads Mikkelsen, Riz Ahmed, and Ben Mendelsohn all buckle down and fare slightly better.”

“‘Rogue One’ boasts thin characters played by great actors scampering about far too many planets with names that sound like obscure venereal diseases. It’s a ‘Star Wars’ knockoff that happens to look a lot like a ‘Star Wars’ movie.” 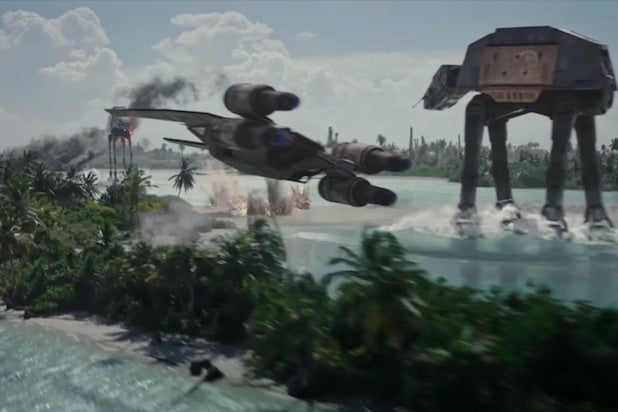 Will Leitch, The New Republic:

“There’s a good reason that last year’s return to the Star Wars universe, ‘The Force Awakens,’ was a success at the box office, as well as among critics and fans: In addition to a well-fed nostalgia and a cast of new characters that felt both original and familiar, the movie was overwhelmingly cheerful … One of the many problems with ‘Rogue One: A Star Wars Story’ is that so much of that joy is gone. The movie is stultifyingly serious, as leaden and dead on its feet as the infamous prequels–both provided us with endless council meetings, charisma-free leads, and distracting technological ‘innovations.’ The movie is so caught up in the mythology of the ‘Star Wars’ universe that it never establishes itself as its own animal. Its plot is muddled–it’s a heist movie in which the rebels steal the plans to destroy the Death Star–its characterizations are forced and truncated, and its battle sequences are more impressive than thrilling.”

“There is a story to ‘Rogue One,’ one that I overheard a viewer or two describe as ‘dark’ on the way out, and I suppose that, despite the inevitable happy ending (or, at least, successful mission), some serious unpleasantness occurs along the way–mainly the death of some major characters.”

“None of these new characters is ever fully developed and the best lines and scenes are taken by Alan Tudyk as the hulking droid K-2SO, who resembles the Iron Giant, and who has an excellently dry and sarcastic sense of humour.”

4. There’s Too Much Going On 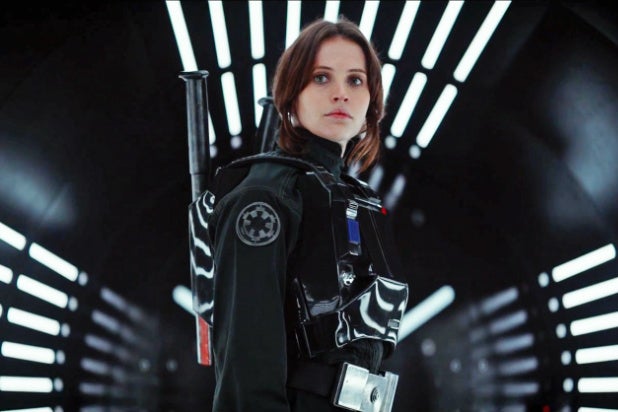 “You’re left wanting both more and less. There are too many characters, too much tactical and technical explanation, too much pseudo-political prattle. And at the same time, there isn’t quite enough of the filial dynamic between Galen and Jyn, and not enough weight given to the ethical and strategic problems of rebellion. When might ends justify means? What kind of sacrifice is required in the service of a righteous cause?”

“What’s ultimately frustrating about ‘Rogue One’ is how it’s clearly coming from two minds. There’s Edwards’ impressionistic views of war, lensed to melancholic heaven by cinematographer Greig Fraser, with wide establishing shots that dazzle for its achingly brusque naturalism. And then on top of all that, there’s the more standard ‘Star Wars’ fluff, from Michael Giacchino’s bouncy flourishes of John Williams (not exactly the grand departure Alexandre Desplat might have been) to the redundant droid humor involving mathematical odds (at least six references to that joke). For a film that’s all about hope and rebellion, it’s kind of ironic how it’s such a conflicted mess in and of itself.” 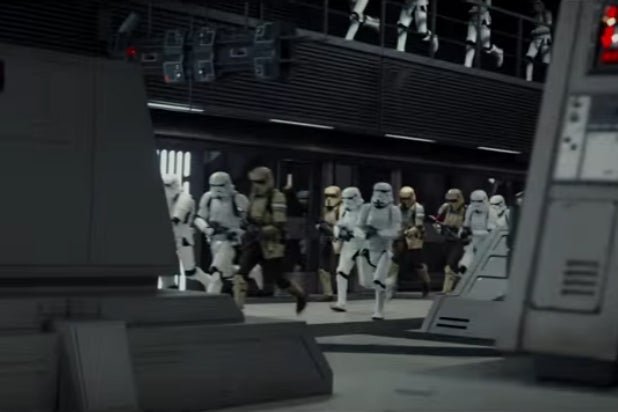 “Part of the problem is director Gareth Edwards, whose previous big credit is ‘Godzilla,’ which was mostly just spectacle. With the help of four screenwriters, Edwards turns ‘Star Wars’ into a war movie, and that is a fundamental error. War movies are about toil, half victories, moral compromise and self-doubt. ‘Star Wars’ is all about good versus evil, about the hard, rewarding work of bringing the light and casting out darkness.

Yes, it’s understandable that after eight movies depicting the same struggle, filmmakers might feel a certain exhaustion. But to load that exhaustion onto the characters is a huge mistake. It’s the same as shoveling a weight onto the audience.”

“What doesn’t feel like ‘Star Wars?’ ‘Rogue One’ is the first ‘Star Wars’ movie with no Jedi, the Jedi order having been destroyed in ‘Revenge of the Sith’ and Yoda and Obi-Wan now AWOL (while Luke is presumably bullseyeing wamp rats in his T-16 and wasting time with his friends at Tosche station on Tatooine).

There are no lightsaber duels; indeed, no lightsabers at all, until a brief flash of red at a critical moment. Like Disney’s first ‘Star Wars’ outing, ‘The Force Awakens,’ the protagonist of ‘Rogue One’ is a tough, capable young woman — but where Rey was unusually strong in the Force, Jyn Erso (Felicity Jones) is not Force adept at all.” 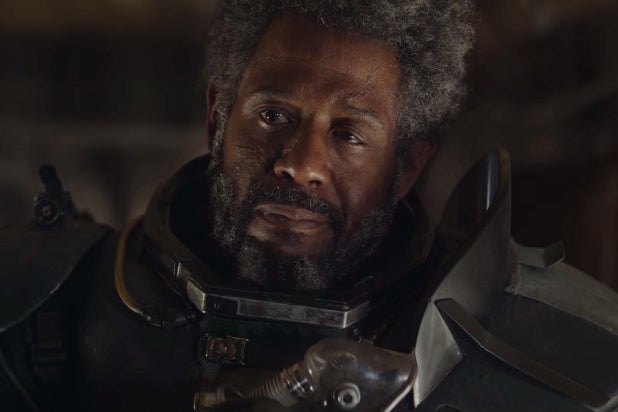 “The new film was directed by Gareth Edwards, a fine sci-fi craftsman whose films include ‘Godzilla’ (2014) and ‘Monsters.’ His direction is good, though it falters in the many battle scenes, which tend to be confusing, badly edited, and fragmentary.

The script — by a pair of otherwise good scribblers, Chris Weitz (‘American Pie’) and Tony Gilroy (‘The Bourne series’) — is an equally slapdash affair that simply recycles chunks of the 1977 film.”

“Edwards and the screenwriters have designed ‘Rogue One’ around applause breaks for cameos and callbacks. We’ve all lost the point of the franchise. Audiences once packed theaters to gawk at the future; now, it’s to soak in the past. The emphasis is on packing in as much nostalgia as possible and tersely editing it together to resemble a film. The filmmakers barely seem to have developed the scenes, and the actors barely appear to be living in them. The quasi-romantic tension between Jyn and Rebel intelligence officer Cassian Andor (Diego Luna) is a fizzle, and neither seems to have developed their character’s motivations beyond glare and shoot.”

“Whatever momentum the new characters’ story has is constantly compromised by prolonged plot detours intent on reintroducing the audience to old places and–in at least one egregious instance–reanimated old faces. This does more than compromise the integrity of ‘Rogue One’s’ plot; it undercuts its core ethic.”