Only problem is I don’t really believe it.

Oh sure, I accept that last year’s numbers were great. There was a bump in global box office to $38.3 billion. A 2 percent rise in admissions. And a surprising spike in attendance by teenagers ages 12 to 17 — they each went to see more than seven movies last year, on average.

But the global revenue bump is coming from China — whose box office soared by a stunning 51 percent last year — and so is admissions. That only helps Hollywood a little bit until that country opens its market. China is very protective of its industry and has a quota around how many non-Chinese movies it will take. As for the U.S. teenagers, my guess is that’s a one-off rise related to the return of “Star Wars” in December.

So the going-to-the-movies business depends a whole lot on the quality of the storytelling and spectacle provided by Hollywood. In a week of nine studio presentations and countless cups of coffee, here’s what I learned:

1. Theaters are dug in hard against Sean Parker’s new Screening Room proposal. After four days, the consensus around keeping the status quo for theatrical releases had hardened into a full-throated battle cry among exhibitors, industry associations like NATO and MPAA, and key directors like James Cameron and Todd Phillips who declared their colors when speaking to exhibitors this week. The debate over The Screening Room, a proposal to offer consumers movies at home for $50 on the same date as the theatrical release, hung over the entire convention. Nearly everyone addressed it — except Sean Parker himself. 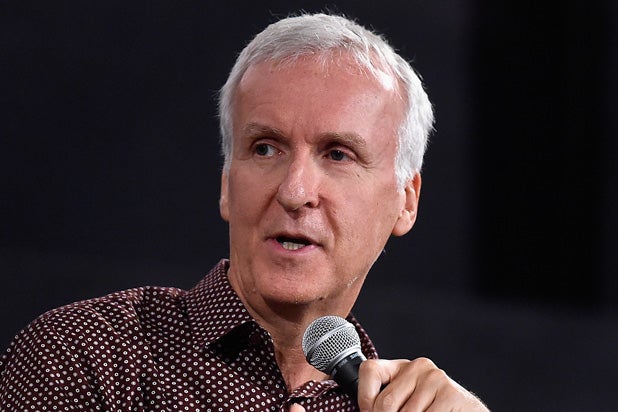 Parker certainly didn’t make any friends by staying away from the convention all week and instead hosting a bunch of movie stars (and Peter Jackson) at his house in Bel-Air for a totally different medical investment.

If Parker and his partner Prem Akkaraju want to show they actually care about the preserving the ecosystem that currently supports billions of dollars in revenue and thousands of jobs, then they need to (a) show up and (b) drop the arrogant private-jet zillionaire aura.

These exhibitors are working folks from the heartland and they need to like you. (Might be too late for that.) The hotshots blew the good opening they had with the very likeable J.J. Abrams espousing experimentation when speaking on stage in Las Vegas. It went downhill from there for their cause. 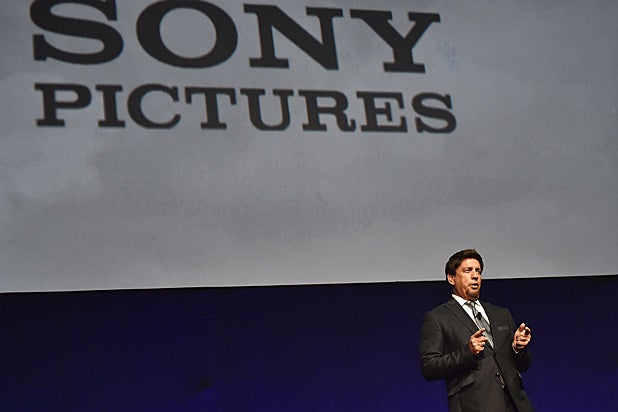 2. Sony needs to get its act together. The disarray demonstrated at the Sony presentation was the talk of CinemaCon. Bad enough that the opening sizzle reel had no sound. Worse that no one stopped the reel from running through to the end after the glitch.

But the real problem was that no one stopped distribution chief Rory Bruer from exhausting the crowd by hogging the stage and running through every single movie, every division and every executive working on movies at Sony. This is the second year in a row that the studio looked amateurish.

The studio lost a lot of audience by the time the agonizingly long 90-minute presentation ended, unfairly diminishing the studio’s strong movies like “Passengers” and “Ghostbusters.” 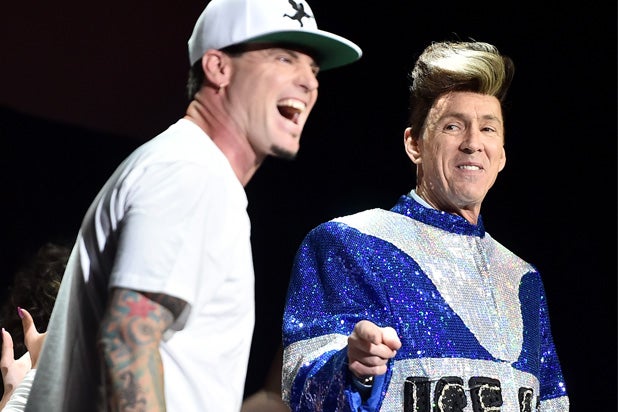 3. Fox let loose. Who knew that Chris Aronson was a dead ringer for Vanilla Ice? The Fox distribution boss proved to be a very good sport in an elaborate and surprisingly well-choreographed song-and-dance number to promote this summer’s animated sequel “Ice Age: Collision Course.” Dope! 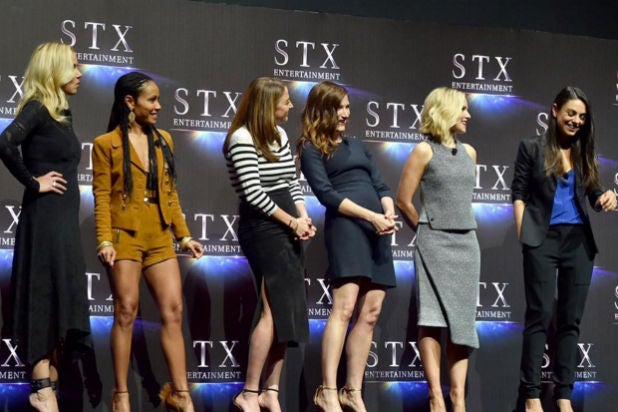 4. STX impressed. The fledgling studio offered up a polished, focused and altogether professional presentation that suggested a serious new player had stepped onto the movie scene. Studio chief Adam Fogelson looked entirely comfortable in his role as emcee of the slate, capably bantering with actors on the stage and even getting Matthew McConaughey to share an “Alright, alright, alright.”

McConaughey stars in “The Free State of Jones,” an historical drama about a revolt by poor Southern farmers against the wealthy landowners in the middle of the Civil War, and it looked strong. So did the gripping “Desierto,” a very timely thriller by Jonas and Alfonso Cuaron set in the no-man’s land of illegal immigration from Mexico.

And sign me up to see “Bad Moms,” about women who’ve simply had enough of all the demands in their lives, starring Mila Kunis and Kristen Bell as leading mama-rebels. Catharsis. Which leads me to… 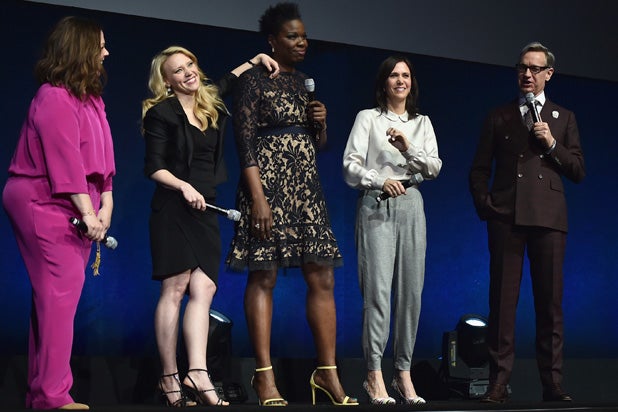 5. Women-led movies are finding their way. It wasn’t only the new “Ghostbusters” — with the full cast of Kristen Wiig, Melissa McCarthy, Leslie Jones and Kate McKinnon — that impressed at CinemaCon. Disney had a number of female-led projects, both animated and live action, from “Moana” to Lupita Nyong’o‘s “Queen of Katwe” and “Beauty and the Beast” with Emma Watson.

I loved the teasers shown of “The Edge of Seventeen,” written and directed by Kelly Fremon Craig and starring a fiercely funny Hailee Steinfeld about … being 17. Likewise, the aforementioned “Bad Moms” has a side-splitting cast that includes Mila Kunis, Christina Applegate, Kristen Bell and Kathryn Hahn (wait for Kristen Bell to describe having sex with her not-hard-enough husband). Amy Adams showed up often for a number of movies, and we really really like seeing Felicity Jones in the new “Star Wars: Rogue One.” 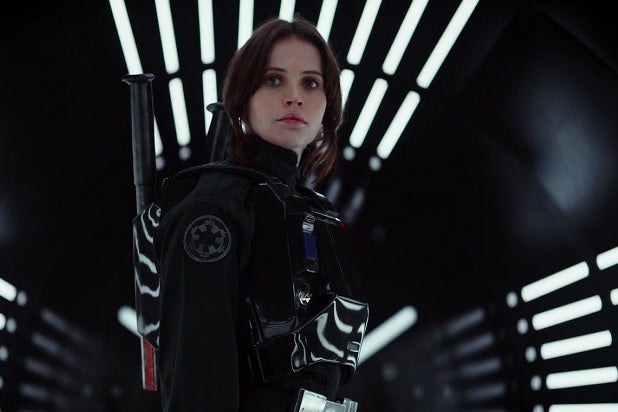 6. Disney Shows Up, Drops the Mic. In a brief but powerful presentation, Disney swaggered more than a little — but with good cause. The PowerPoint slide that stuck in my mind was that $2.1 billion for “Star Wars,” along with the cumulatively stunning global box office numbers around “Zootopia” and as well as live-action movies adapted from classics in the studio’s archives, like “Cinderella” and “Maleficent.”

One glimpse at the slide with Disney’s five leading movie brands — Marvel, Lucasfilm, Walt Disney Animation, Pixar and Walt Disney Pictures — reminded everyone how incredibly strong the studio’s movie divisions are. (Yeah, there were a lot of slides. The studio didn’t bother to jet in much talent.)

And that’s even with losing Steven Spielberg‘s DreamWorks to Universal, which no one seemed to noticed. Disney’s movie divisions are firing on all cylinders, and that’s why the swagger (yeah, Dave Hollis, we mean you) was deserved.