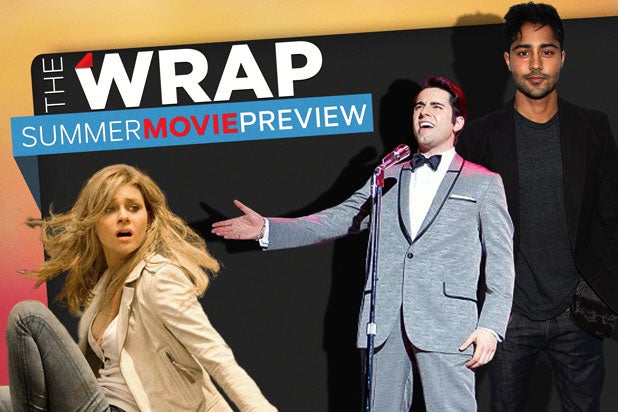 The biggest stars of the summer are likely to be giant robots, bands of mutants and a web-spinning costumed hero. Beyond masked crime fighters and intergalactic warriors, there are a few up-and-coming talents poised to make a mark on the big screen.

Names such as John Lloyd Young, Nicola Peltz, Manish Dayal are likely to be met with blank stares by average moviegoers, but once summer closes, their days of anonymity may be behind them. Ben Falcone and Dave Bautista have higher profiles, but they are looking to build on that success by breaking into different aspects of the movie business.

Of course, even the best-laid career plans can go astray, and not every hot young thing catches fire, but it’s a safe bet that the bulk of these actors, actresses and behind-the-camera talent are about to become major players in Hollywood.

JOHN LLOYD YOUNG
How he’ll spend his summer: Setting teen hearts a-flutter while flexing his falsetto as Frankie Valli in “Jersey Boys” (June 20).
Upcoming: Nothing announced yet, but if “Jersey Boys” hits, Lloyd Young will be in demand on both coasts as a theater and film star.
Why he’s about to break through: When it came time to cast the movie version of the Broadway musical, director Clint Eastwood had no choice but to tap the man who put a unique spin on a rock icon, winning a Tony Award for his troubles. As anyone who saw his acclaimed stage work can attest, Lloyd Young is more than just a pretty voice. He’s a singer who can act.

ANSEL ELGORT
How he’ll spend his summer: Falling in love with Shailene Woodley’s terminal cancer patient and causing a surge in Kleenex sales in the young adult weepy “The Fault in Our Stars” (June 6).
Upcoming: Starring opposite Adam Sandler and Jennifer Garner in Jason Reitman‘s “Men, Women & Children” and re-teaming with Woodley on “Insurgent,” the follow-up to “Divergent.”
Why he’s about to break through: He’s playing a rebel with a sensitive side in “The Fault in Our Stars.” Mix with a pinch of wit and a dash of good looks, and Hollywood just found its newest pin-up. Woodley, his sister in “Divergent, and the best-selling novel that inspired the film will bring audiences into theaters; Elgort will steal their hearts.

ELIZABETH OLSEN
How she’ll spend her summer: Playing beauty to the beast in “Godzilla” as the wife of Aaron Taylor-Johnson (May 15).
Upcoming: Saving the world and casting spells as the newest member of Earth’s Mightiest Heroes in “Avengers: Age of Ultron.”
Why she’s about to break through: Olsen’s gritty work in low-budget indies such as “Martha Marcy May Marlene” earned critical raves. Now it’s time for the wider world to get a flavor of what had the art house world sitting upright. “Godzilla” looks like the rare special-effects film that’s as interested in its human characters as it is in leveling whole cities (though there will be plenty of that, too). Plus, nothing will slow down the box office juggernaut that is “Avengers: Age of Ultron” when it lands in theaters next year.

MANISH DAYAL
How he’ll spend his summer: Getting in a culinary war as the Indian rival to a famous french chef (Helen Mirren) in “The Hundred-Foot Journey” (Aug. 8).
Upcoming: The improv comedy “I’m Obsessed with You: But You’ve Got to Leave Me Alone” and the TV movie “Identity” for the CW.
Why he’s about to break through: Dayal is about to prove he can go toe-to-toe with an Oscar winner like Mirren. She’s got the bigger name, but his is the more pivotal role — and the film offers the kind of small-scale human drama that should be a nice palate cleanser after a summer of blockbusters and bombast.

NICOLA PELTZ
How she’ll spend her summer: Playing Mark Wahlberg’s daughter in “Transformers: Age of Extinction” and growing up in the coming of age drama “Affluenza.”
Upcoming: Nothing firm yet, but she signed on to make three movies when she was cast as one of the leads in ‘Transformers.”
Why she’s about to break through: An attractive, young actress starring in a Michael Bay movie? That tends to help your career — on-set conflict or not. Just ask Megan Fox.

BEN FALCONE
How he’ll spend his summer: Bringing ‘Tammy,” his directorial debut, into the world with the help of wife Melissa McCarthy.
Upcoming: He has several scripts in development, but none have a greenlight. “Tammy” should help.
Why he’s about to break through: A well-regarded comedian, Falcone has booked smaller roles in a variety of movies and TV shows. His first feature behind the camera will expose him to a lot of new fans and collaborators.

DAVE BAUTISTA
How he’ll spend his summer: Kicking ass as Drax the Destroyer in Marvel’s “Guardians of the Galaxy.”
Upcoming: A lot more wrestling. Bautista returned to the WWE in January and will appear at Wrestlemania XXX this weekend. But he left the WWE in part to pursue a career in acting, so expect more movie roles in his future.
Why he’s about to break through: Like The Rock before him, Bautista hopes combining WWE stardom with choice acting roles will elevate his profile within the industry and secure a dedicated group of fans outside it. “Guardians of the Galaxy” should help, as all indications are that it will be a hit.