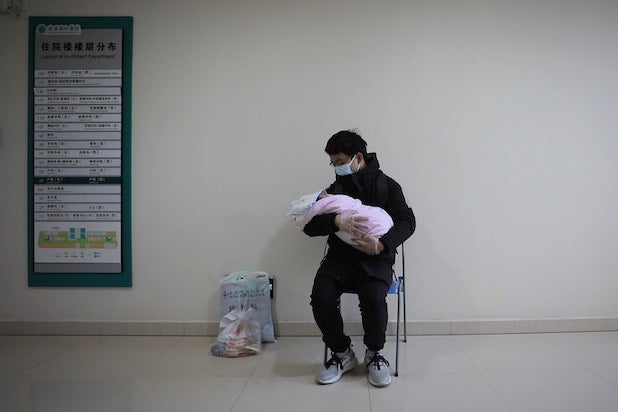 When Chinese-American director Hao Wu began making a film about the early days of the COVID-19 outbreak in February of this year, he did not know that the outbreak would become a worldwide pandemic — and he did not expect that on Dec. 4, when his film “76 Days” would launch in virtual cinemas around the country, the U.S. would still be in the throes of a virus that was only growing stronger.

“It feels both a long long, long time ago, and also present,” said Wu, whose MTV Documentary Films release documents with harrowing intimacy the first two months of the virus in its epicenter, the Chinese city of Wuhan.

“The reason it feels so long ago is that for Chinese people, it was an emotional and traumatic experience for the entire country, but now China is back to normal,” he said. “But in the rest of the world, especially in America, it feels really present. When we were making the film, we were still in the first wave. And now, as evidenced by the election result, half the country is still party to Trump’s narrative that he had things under control, that COVID is a hoax. It’s bizarre to me.”

Wu, whose other films include “People’s Republic of Desire” and “All in My Family,” was not thinking about filmmaking when he planned a trip to China for himself, his partner and their children in late January of this year. But about 24 hours before they were supposed to leave to visit his parents, they heard that the country might be undergoing a lockdown because of the COVID-19 outbreak, which had yet to be declared a pandemic.

Wu ended up making the trip by himself, arriving in Shanghai on the first day of a lockdown that left the streets deserted. When he returned to the U.S., MTV Documentary Films asked him if he’d be interested in making a film about COVID, so he contacted two Chinese directors on the ground in Wuhan (Weixi Chen and another who wishes to remain anonymous) and began reviewing and editing their footage. (He considered returning to China himself to shoot, but it would have required smuggling himself into a city where visitors were not allowed and all lodgings were closed.)

The result is a wrenching but sometimes hopeful chronicle of the first 11 weeks of the pandemic, with much of the footage taken in overcrowded hospitals full of the dead and dying. And while we’re used to taking cues from the faces of the people we see on screen, virtually everyone in “76 Days” remains hidden behind masks.

“I wasn’t paying much attention to that during the editing,” he told theWrap. “By late March post, my co-directors stopped collaborating with me because China was really tightening their control of the COVID narrative, and they were afraid of working with someone who lives outside of China. They didn’t know how I was going to take take the story. So I started editing, not knowing whether they will grant me the rights to their footage, and also limited by the amount of footage I had access to. I couldn’t go ask them to go back and shoot more and interview with those people so we can see their faces.

“I was struggling to find the highlights in this footage, and I was basically trying to focus on finding the characters and the most emotional human moments. I was so busy with that, I wasn’t paying attention to the masks. I could tell them apart, because I could read the writing on the back of their hazmat suits. I could track the characters, and I wasn’t thinking maybe my American viewers couldn’t.”

As Wu rushed to finish a rough cut so he could win back the trust of his co-directors (which he did), he also began sharing some of the footage with friends in the U.S. “Once I started doing a limited amount of test screening online, their response was that they could tell the characters apart,” he said. “I found that so fascinating. I feel like the reason for that is because, maybe subconsciously, I was giving each character one emotional beat. For the couple, it’s when will they be reunited with their baby. For the female nurse, it’s all about returning phones and IDs and personal effects to the families of the dead. For the old grandpa, it’s about wanting to go home.

“Everybody has this one beat – and even though you cannot see their faces, every time we see them, it’s a variation on that beat. I guess that’s why, luckily for me, audiences outside of China can still track the characters.”

An interview with Hao Wu about “76 Days” will also appear in a special December documentary issue of TheWrap’s Oscar magazine.