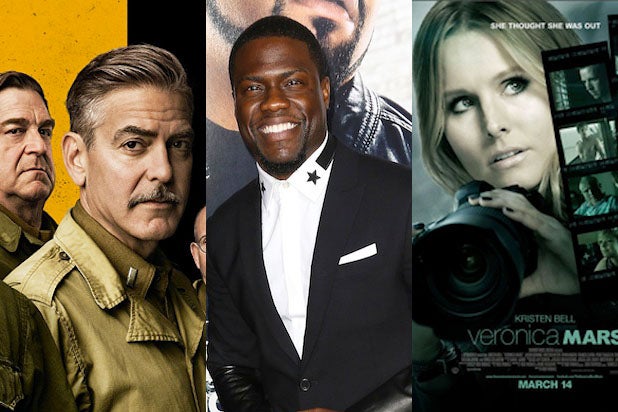 A trio of quintessentially American movies are expected to prevail at the box office early this year, with The Muppets and Captain America poised to join the Navy Seals of “Lone Survivor” on the 2014 hit parade.

But aside from these movies, the first-quarter box-office outlook is extremely muddled.

Lionsgate has high hopes for “Divergent” as the next young-adult franchise, but we’ve seen YA movies crash and burn before, scuttling any sequel plans. George Clooney shot down reports he was struggling with “Monuments Men,” but Sony nonetheless moved it out of prime late-year awards position until early this year. “Transcendence” director Wally Pfister has helped Christopher Nolan make a string of huge hits, but he’s never made a movie on his own.

These are just a few of the uncertainties about upcoming movies. Here are nine burning questions about the box office in coming months.; how they play out will determine how strongly the film business starts 2014.

1. Why Are Studios Still Dumping So Many Movies Early in the Year?
For subsidiaries of corporate entities, movie studios struggle an awful lot with a calendar. They still release their biggest hits in the summer, the bulk of their awards movies at the end of the year and their biggest potential turkeys at the start the year.

Studios are getting better about this — “Identity Thief” was a surprise smash for Universal last February, and the studio scheduled “Lone Survivor” and “Ride Along” for January — but they are still dumping too many movies with negative buzz in the first few months of the year. The list begins with “Jack Ryan,” which was pushed out of the crowded holiday schedule, and goes on through “Pompeii,” “Winter’s Tale,” and “Noah,” a biblical epic where the filmmaker and studios fought over the depiction of religion.

And then there’s “I, Frankenstein,” a movie that looks a couple movie stars shy of a hit.

Quite simply, too many spring releases look they don’t fit anywhere on the calendar.

2. Will George Clooney Pull a Martin Scorsese?
Once considered a possible Oscar contender this year, “Monuments Men” got pushed to February — the box-office equivalent of Siberia. But Clooney, its director, said he and producing partner Grant Heslov wanted the extra time to finish the Sony release. Clooney also suggested the expensive period movie was more of a commercial play than an awards contender, comparing it to “Shutter Island.”

“Shutter Island,” originally scheduled for a late-year release, was also once considered an awards contender, largely because it was Martin Scorsese’s feature film follow-up to “The Departed,” an Oscar-winning genre movie. Though  “Shutter Island” did not add to Scorsese’s seven Best Director nominations, it proved to be a rousing thriller, grossing almost $300 million in worldwide ticket sales.

Clooney has the cast to lure foreign audiences: He stars in it alongside Matt Damon, Bill Murray, Cate Blanchett, John Goodman and Jean Dujardin. You know, veritable nobodies. The real question is whether the premise of art stashed in Nazi territory can connect with a broad enough audience.

3. Will “Veronica Mars” Validate Crowdfunding?
Few movies got more with less last year than “Veronica Mars,” the upcoming film based on the popular TV show. Rob Thomas’ crowdfunding campaign set a Kickstarter record for a film or TV project, and forced filmmakers the world over to afford crowdfunding more respect.

It is not just the province of smart watches or wannabe entrepreneurs. It is a legitimate way to raise money for a creative endeavor.

Yet online buzz does not always transfer into box office success, as “Snakes on a Plane” demonstrated. While “Veronica Mars” was a popular show, it was never big enough to merit a movie – until the crowdfunding campaign revealed an avid fan base. Those fans also demonstrated that crowdfunding’s utility goes beyond financing. Some find it even more enticing as a way to identify an audience early on and secure their emotional and financial investment in a project.

Some producers, distributors and entrepreneurs view crowdfunding as a  crucial part of future marketing campaigns – a cheap way to identify and communicate with fans as early as possible. The performance of “Veronica Mars” will go a long way towards determining the efficacy of crowdfunding as a marketing tool.

4. Do People Care (or Know) About Wally Pfister?
Pfister has played an integral role in the production of several blockbusters over the past few years as the cinematographer for Christopher Nolan. From “The Dark Knight” to “Inception,” he’s had a hand in some of the most astounding visuals of the past several years.

Now Pfister strikes out on his own, directing his first feature, “Transcendence.” Shrouded in the same secrecy Nolan demands for his own movies, the film stars Johnny Depp as some kind of scientist. Pfister has more tools at his disposal than the average first-time director, but that also places extra pressure on Pfister to deliver.

No $1 million indie, “Transcendence” is a major release for Warner Bros., Nolan’s home studio, and its only release in the month of April. April looks more and more like summer every year, with a Marvel sequel, “Captain America,” and a major animated sequel, “Rio 2” sandwiching “Transcendence.”

Pfister’s visual wizardry could produce one of the year’s biggest surprises. Or it could leave Warner Bros. wishing it made “Interstellar” first.

5. Is Kevin Hart the Next Comedy Icon?
Adam Sandler had so much success in the 1990s that he birthed his own genre – Adam Sandler movies. He makes a new one every year, and he makes money on them (almost) every time. The same applied to Eddie Murphy until he insisted on playing 17 characters at once.

Kevin Hart is not there yet, but one of the hardest working comedians in the business is already omnipresent. He helped turn both “Think Like a Man” and his own stand-up special into hits last year, and this year Hart stars in three different movies.

The first of those is “Ride Along,” a buddy comedy starring Hart and Ice Cube that will be the biggest hit of the year’s first month. You can’t find anyone who thinks it will fail, which is why Universal is already plotting a sequel.

That film will set the foundation for another banner year, and by the time “Think Like a Man Too” opens, it could be “just another Kevin Hart movie.”

6. Can “Divergent” Live Up to the Hype?
“Divergent” is the next “Hunger Games.” No, it’s the next “Twilight.” It’s hard to resist comparing “Divergent” to those other young adult franchises — based on hugely popular book series with strong female protagonists aimed at the same ravenous group of teenage readers.

Summit bought “Divergent” hoping it could replicate the success of “Twilight,” which it also made, while Lionsgate certainly sees parallels with its own “Hunger Games.” Lionsgate has talked up the movie to Wall Street on earnings calls, and everyone in town has talked about star Shailene Woodley.

Yet there are enough movies in the young adult scrap heap — “The Mortal Instruments,” “Beautiful Creatures” and “The Host” to name a few — that suggest caution. All this hype could be setting the movie up to fail.

Now that any of this stopped Lionsgate from meeting with potential directors to make the sequel, “Insurgent.”

7. Are There Too Many Family Titles?
Studios’ scheduling problems are painfully evident when it comes to animated movies. Last summer was too crowded, which is why “Turbo” and “Smurfs 2” underperformed domestically before turning it on overseas. The winter was vacant, permitting “Frozen” to top the box office six weeks after it first opened in theaters.

Now another surge is on the way, with six movies aimed squarely at kids opening over a 12-week span. “The Lego Movie,” “Muppets Most Wanted” and “Rio 2” should do well. What does that mean for “The Nut Job,” “Mr. Peabody & Sherman” and “The Wind Rises”? It’s anyone’s guess.

Open Road Films has modest expectations for “The Nut Job,” which did not cost as much to make as some of these other films. Yet it opens this weekend against three other films: “The Wind Rises,” the final film by Japanese director Hayao Miyazaki, is unlikely to become a blockbuster, though Disney would surely welcome such a performance.

“Peabody” is the biggest question mark. DreamWorks Animation released one of the year’s biggest hits, “The Croods,” last spring; the movie ranked as the year’s second highest-grossing original film (after “Gravity”) thanks in part to a lack of competition. “Peabody” will have no such luck this year, opening right before “Muppets” and “Rio.”

8. Will Captain America Truly Flex His Muscles Overseas?
The first “Captain America” movie was a global hit by any measure, grossing $370.5 million worldwide. Yet it was the least successful of Marvel’s recent movies overseas, trailing the likes of “Iron Man” and “Thor.”

Like “Iron Man 3” and “Thor 2,” this sequel should receive a bump thanks to the success of “The Avengers.” Both of those movies earned hundreds of millions more than their predecessors.

Whether that growth happens overseas will determine whether this quintessentially American icon can rival his fellow superheroes.

9. Will Asia Help or Hurt the Box Office?
It’s China on one side and the Russia-based Winter Olympics on the other. The Chinese box office grows every year, offsetting stagnation in the United States. “Iron Man 3” proved that $100 million runs are possible in foreign countries, and every studio is angling to secure a release in the world’s second largest market.

Most project continued growth in China, with some projecting it will surpass the United States within the decade.

Yet much as the Chinese box office will boost box office receipts, the other half of the Sino-Soviet axis is bound to cause some problems. The Winter Olympics, set in Sochi, Russia, will keep viewers at home throughout February.

Bonus Round: Which Wes Anderson Will Show Up?
The idiosyncratic director has a devoted following that will show up to see every movie he makes. The key for Fox Searchlight, which is distributing Anderson’s latest, “The Grand Budapest Hotel,” is convincing everyone else to come.

Yet the man who inspired hipsters to wear plaid has a mixed track record at the box office. For every “Moonrise” and “Tenenbaums” there is a “Darjeeling Limited.”

“Grand Budapest Hotel” has an inimitable cast of Anderson stalwarts (Bill Murray, Edward Norton, Jason Schwartzman) and newbies (Ralph Fiennes, Harvey Keitel), but no one can say where this will land in the Anderson canon.