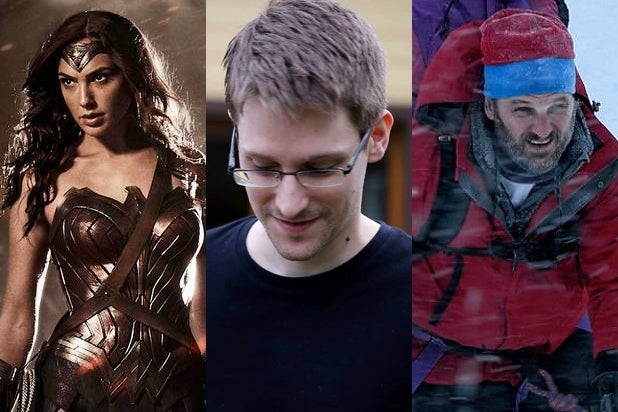 Hollywood will never be accused of having too many original ideas, especially in this age of sequels and remakes, but the well really seems dry when two different groups of filmmakers and studios race to release a film on the same topic.

Many movie-goers will recall the “Armageddon” and “Deep Impact” pile-up of 1998, but there has been a slew of recent examples, such as “The Prestige” and “The Illusionist,” both period dramas about magicians in 2006. Or the 2013 battle between “White House Down” and “Olympus Has Fallen” — two eerily similar action films about the president’s home being under attack.

The trend is not going away anytime soon and studios don’t seem to be deterred by rival, similar projects. A recent Steve Jobs biopic starring Ashton Kutcher is not scaring Aaron Sorkin and Sony from doing their own film about the Apple founder. For younger viewers, two live-action “Jungle Book” movies set to release a year apart are both sure to attract fans of the Rudyard Kipling classic.

See video: ‘What’s the Deal’ With the ‘Jungle Book’ Movies and the Disney-WB Rivalry? (Video)

Here’s a rundown of all the stories that are so hot right now, they need to be told more than once.

The Jungle Book
Fairy tales have timeless appeal in Hollywood, and just like little kids at story time — movie-goers often want the same story told over and over again. After “Mirror Mirror” and “Snow White and the Huntsman” went head-to-head, the next to step into the ring is Mowgli, the human child raised by wolves. Disney has a version of “The Jungle Book” which will be directed by Jon Favreau, while over at Warner Bros, Andy Serkis is helming “Jungle Book: Origins.” The two will open one year apart, in October 2015 and October 2016, respectively. For an added bonus, there are also at least two “Beauty and the Beast” retellings in the works: one from Disney with director Bill Condon and another from Guillermo del Toro.

Edward Snowden
NSA leaker Edward Snowden has been heralded as a hero by some, condemned as a traitor by others, so it’s not a surprise that his story — which is still ongoing — is proving to be a deep well from which Hollywood is returning to over and over. There’s documentary “Citizenfour,” chronicling filmmaker Laura Poitras’ correspondence and meetings in Hong Kong with the man who would eventually reveal himself to be Snowden. Of course, there has to be a fictional Hollywood take on the true story as well, and Oliver Stone has taken it upon himself to dramatize Snowden’s tale, enlisting Joseph Gordon Levitt to play the whistle blower. These all come after several films have already been made on the very similar topic of Wikileaks founder Julian Assange.

Madame Bovary
Gustave Flaubert’s classic French novel has been adapted half a dozen times for the screen over the past 50 years or so, and two more are about to be added to that list. Sophie Barthes has directed Mia Wasikowska in a traditional adaptation about the unhappily married woman who has a series of affairs to escape her discontent with every day provincial life, while Anne Fontaine’s “Gemma Bovary” sees Gemma Arterton in a modern twist on the same tale.

The Western as Revenge Thriller
The Western has been a favorite topic for decades, but all of a sudden, cowboys are out for vengeance. Ti West, Alejandro González Iñárritu and Kieran Darcy-Smith all have movies in the works that are revenge thrillers set against the wild, wild west. West’s “In a Valley of Violence” has Ethan Hawke seeking revenge on thugs who killed his brother, while Iñárritu will direct Leonardo DiCaprio seeking vengeance in “The Revenant,” and Darcy-Smith has Woody Harrelson facing off against Liam Hemsworth in “By Way of Helena.” All three are currently or soon-to-be filming.

Mount Everest
Mount Everest is the ultimate challenge for thrill-seekers to conquer, and it’s not without its tragedies that are ripe for cinematic retelling. In Hollywood, there are two currently in the works, although they are about different disasters. First out of the gate is Baltasar Kormákur’s “Everest,” starring Jason Clarke and Jake Gyllenhaal about the 1996 avalanche that killed several climbers. Doug Liman also wants in on the Everest business, and is preparing to tackle “The Summit,” which has Tom Hardy attached to play George Mallory, the first man to conquer the mountain back in the 1920s.

Steve Jobs
The late Apple founder was recently immortalized on the big screen by Ashton Kutcher in indie “Jobs,” and Aaron Sorkin and Sony have been trying to create a starrier, higher-profile biopic for some time. Now, Danny Boyle is on board and they might be close to locking down an actor to play Jobs, with Michael Fassbender in early talks for the role, after Leonardo DiCaprio and Christian Bale both dropped out.

Artificial Intelligence Discovering Their Humanity
Both Neill Blomkamp’s “Chappie” and Alex Garland’s “Ex Machina” are about robots who discover their humanity, and both are coming in 2015. Blomkamp’s lead character looks more like an old-fashioned robot and will find himself learning how to be human. Meanwhile, Alicia Vikander in “Ex Machina,” already looks somewhat human, and may have more humanity in her than her possibly evil inventor, played by Oscar Isaac.

Diverse Superheroes
Fans have been restless and impatient for Marvel and DC to include more than just white, male superheroes in their comic book adaptations for years, and both companies finally confirmed there’s diversity in the works — with the announcements coming just two weeks apart. DC’s “Wonder Woman” kicks things off with a Gal Gadot-led film in 2017, while Marvel hits back with “Captain Marvel” in 2018. Marvel’s “Black Panther” was the first black superhero in mainstream American comics, and he’ll finally get his own movie in 2017 starring Chadwick Boseman. Not to be left out, DC has announced a movie revolving around “Cyborg,” the black superhero who will be played by Ray Fisher and who will join forces with the “Justice League” before fronting his own movie in 2020.

Drone Warfare
Drones are increasingly being used in all areas of technology, but the story Hollywood is currently obsessed with is how they affect warfare. Andrew Niccol has already screened his movie “The Good Kill,” starring Ethan Hawke as a pilot who begins to question the ethics of his job, and it’s been picked up for release by IFC. Meanwhile, Gavin Hood has directed the likes of Helen Mirren, Colin Firth and Aaron Paul in “Eye in the Sky,” which focuses on a particular top secret operation that turns deadly.