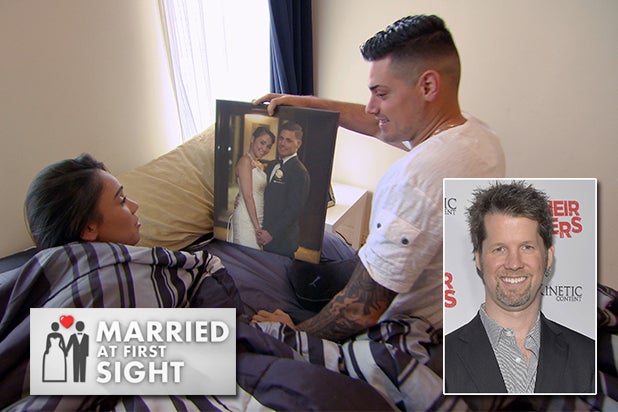 Kinetic Content CEO Chris Coelen met his own wife on a blind date.

So he’s a natural to executive produce “Married at First Sight,” which pairs six strangers in legally binding marriages and then watches the inevitably fraught results. The reality series wraps its eyebrow-raising second season on Tuesday on FYI network.

TheWrap spoke to Coelen, who also produces “The Taste,” “Little Women:LA,” and prior shows “Wife Swap,” and “Don’t Forget the Lyrics.”

He gamely fielded questions table-side at the Beverly Hilton, moments after he and co-executive producer Sam Dean lost the Critics Choice TV Award to Clay Newbill and Mark Burnett for “Shark Tank.”

1. If these are legal marriages, how do you handle the paperwork jiu-jitsu?

A legal wedding requires a marriage license, which would contain the vital information of the spouse. How do you avoid spoiling the name, age, address, and other key identifying data before the show? The on-air participants sign marriage licenses “immediately after the ceremony,” Coelen said.

2. What about prenuptial? Some of the cast own New York City real estate and have established careers beyond the default reality show model/actor/bartender tropes.

“We want to give them some protection walking in,” he explains. “If for some reason it does not work out, at least you are protected with this basic form. You are not going to get yourself in to any legal trouble. Once they are in to the marriage, everything is completely up to them.

3. What do the couples get paid?

4.  Why does the show not include any same-sex couples?

“It’s a casting thing,” Coelen said. “We’d love to but it’s very difficult.” There’s also a risk given the very surprise set-up of the show. “Because we have to put all the women and all the men in the same room  (by gender) in workshops [during the casting process], there is a chance they could see each other [before meeting at the altar]. If we could figure out logistically how do it, we’d love to do it.”

5.  It seems like it would be fun to see the three couples living in the same city, working with the same relationship experts, having the same experience together. Why has there never been an all-cast dinner party night?

“That would be fake,” Coelen said. “It’s not that we don’t want them to [meet the other couples in the show]. If they did, they do. We just want it to be real. We don’t set anything up, really. It would be a lot easier from a production standpoint if we said, ‘Why don’t you all move here? Why don’t you all come to L.A.?'”

Also Read: Why Hollywood Is Hooking Up With Tinder, Grindr for Movie, TV and Music Projects

6. Did you shoot more weddings than you show?

7. Divorce: Do you pay for attorneys and is there help?

“There is not any money specifically built in for divorce costs, no,” Coelen said. “We will contribute within a certain period of time if they get divorced. We will help them cover the costs of an attorney if they choose to do that. I don’t know what the amount is. It’s nominal.”

8. How many people actually want to do this?

Coelen said that 17,000 people auditioned for the show. That’s almost as many as will be at Cleveland’s Quicken Loans Arena on Tuesday for the third game of the NBA finals, which is the series’ time-period competition.

9. Will there be a third season?

Not only will “Married at First Sight” get a third season, it’s already shooting in Atlanta. In fact, Dean missed the Critics Choice TV Awards on May 31 because she was on location in Georgia.