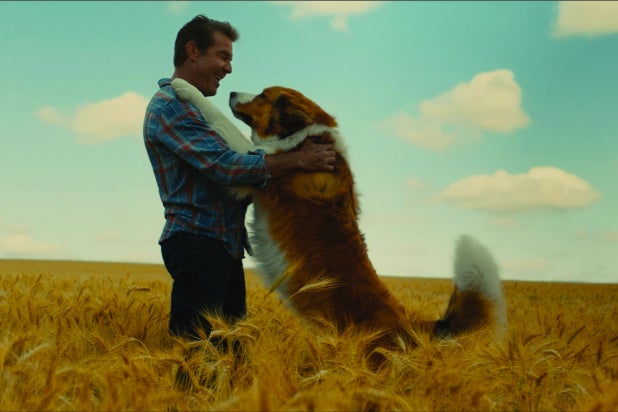 There is apparently a sizable overlap between people who like films in which cute dogs scamper around happily, and people who like films in which cute dogs drop dead every half an hour. In 2017, “A Dog’s Purpose” catered to both groups by telling the tale of Bailey, whose soul transmigrates into the body of a newborn pup whenever he dies. He is granted a different name, breed, and (sometimes) gender with each metempsychosis, but his enthusiastic thoughts are always voiced by Josh Gad, and he retains his loyalty to his favorite master, Ethan, played in the film’s later scenes by Dennis Quaid.

Critics agreed that “A Dog’s Purpose” was, well, a dog, but Bailey, who can recall his past lives, is back in the sequel, “A Dog’s Journey”.

Again, it is a glossily nostalgic and moralistic Nicholas Sparks-style melodrama co-written by W. Bruce Cameron, and adapted from his novel. But it doesn’t have quite the same pedigree as “A Dog’s Purpose.” That film was directed by Lasse Hallstrom, whose output — including, of course, “My Life As A Dog” — has earned numerous Oscar nominations. For the sequel, Hallstrom has handed the reins, or rather the leash, to Gail Mancuso, a sitcom director making her big-screen debut.

Also Read: 'A Dog's Purpose' Is 'Clumsily Manipulative Dreck' and 6 Other Gnawing Reviews

But while “A Dog’s Journey” never looks any better than a TV movie, it is more satisfying than “A Dog’s Purpose,” largely because it revolves around a single human-canine relationship. The first film gave much of its running time to Bailey’s incarnations away from Ethan. The second film, a shameless heart-warmer and tear-jerker aimed squarely at tween- and teenage girls, focuses on Bailey’s efforts to stay with Ethan’s step-grandaughter. In other words, “A Dog’s Purpose” was about a dog’s journey, whereas in “A Dog’s Journey,” the dog has a purpose.

The story picks up where the last one left off: Bailey, now an aging St. Bernard known as Buddy, lives on an idyllic Michigan farm with Ethan and his wife, Hannah (Marg Helgenberger, taking over from Peggy Lipton). Their immaculate farmhouse has two other occupants. One is Hannah’s widowed daughter-in-law Gloria (Betty Gilpin), the other is Gloria’s toddler, Clarity Jane, a name which is mercifully abbreviated to CJ. Much to Hannah and Ethan’s concern, Gloria is less interested in playing with CJ than in drinking white wine. (In “A Dog’s Purpose,” Ethan’s father was an alcoholic, too, so perhaps Cameron was intent on examining the subject from all angles. Or perhaps he was short on ideas.)

See Photos: From Wags to Riches: 9 of TV's Most Famous Dogs

Soon, the resentful Gloria leaves the farm and takes CJ with her to suburban Chicago. Not long afterwards, Bailey/Buddy dies, and — following a brief interlude in an Elysian wheat field, where you half-expect him to gambol past Maximus from “Gladiator” — he is reborn as a female puppy who will be named Mollie. Mollie immediately meets 11-year-old CJ (Abby Ryder Fortson, “Ant-Man”), and sticks with her as she grows into a teenager (Kathryn Prescott, “24: Legacy”) who prefers to hang out with grungy bad boy Shane (Jake Manley, Netflix’s “The Order”) than with her best friend Trent (Henry Lau, a pop star in China and South Korea).

It’s here that the fundamental cruelty of the franchise’s concept becomes glaring. To keep the gimmick going, Mollie/Bailey has to meet an untimely end, and so, right on schedule, s/he takes another trip to the big wheat field in the sky. The film then skips through Bailey’s next life in a Pittsburgh garage, and concentrates on his life after that, when he is a Yorkshire Terrier named Max. Inevitably, the mystical pooch quickly locates CJ, who is now living in New York with another terrible boyfriend, Barry (Kevin Claydon, Netflix’s “21 Thunder”). Much like Shane, Barry sneers at CJ’s dreams of becoming a singer-songwriter, although, to be fair, when we hear her singing in a New York bar, her bland performance suggests that maybe those boyfriends know what they’re talking about.

See Photos: All 6 'Benji' Movies, Ranked From Worst to Best

“A Dog’s Journey” is a softer and fluffier animal than the source novel, in which CJ attempts suicide and Gloria is stricken with Alzheimer’s. True, there is death and disease aplenty in the film, but the central dramatic question is whether CJ will find the right man, and there isn’t much tension there. In the conservative world of “A Dog’s Journey,” with its fuzzy combination of Buddhist doctrine and Christian values, characters are either family-oriented and obviously good, or they are blatantly awful. Not even CJ, with her disastrous taste in men, can fail to work out, eventually, who falls into which category.

So what is Bailey’s purpose in all of this? There are a couple of scenes in which he literally pulls his owner in the right direction, but his main job is to balance the film’s traumas with his naive internal monologue and his copious bodily emissions. (“A Dog’s Journey” may not compete with Alfonso Cuarón’s “Roma” in many respects, but it certainly gives it a run for its money in the canine feces department.)

These antics are all very adorable, but they are hardly crucial to the plot — and that could the screenplay’s major flaw. It is CJ who goes on a journey. Bailey might as well have stayed at home in his basket.