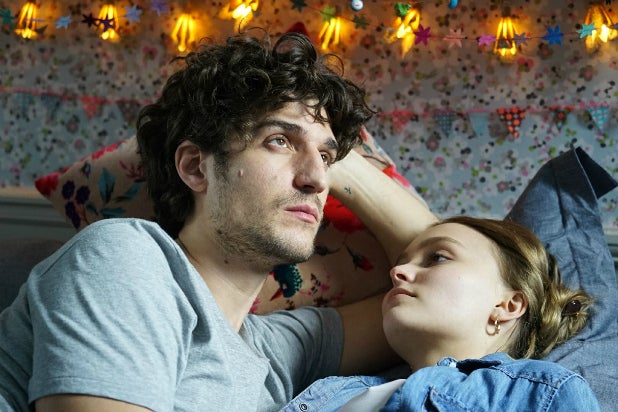 There are almost too many original ideas in “A Faithful Man,” the second feature directed by French star Louis Garrel.

Many plot twists and turns are packed into the rather rushed 75-minute running time here, and they are not always “elegant,” to borrow a preferred term from the film, but they are certainly diverting. The screenplay was co-written by Garrel and the great screenwriter Jean-Claude Carrière, and the tone is all over the place, but playfully so.

“A Faithful Man” begins with a shot of the Eiffel Tower and some tasteful piano music on the soundtrack, and this would seem to threaten some serious Gallic treatment of l’amour. Garrel’s character Abel tells us in narration that he has been living with Marianne (Laetitia Casta) for three years. As he is leaving one morning for work, Marianne very matter-of-factly tells him that she is pregnant with a baby by a mutual friend named Paul, and Abel takes this news with near-comic equanimity. There is even an old-fashioned Noel Coward air of “we’re all adults and we’re sophisticated” about their viewpoint.

Any film with Louis Garrel in it is at least partially about his hair, which is close-cropped in this first scene but back to its full iconic mess of curls in a scene set around eight years later, at Paul’s funeral. The dry comic undertone of the material is maintained when Abel goes out to eat with Marianne and the waitress keeps shaking her head to let him know not to order certain dishes, but this romantic drama with whiffs of romantic comedy shifts towards something darker when Joseph (Joseph Engel), Marianne’s young son, tells Abel that he thinks Paul was poisoned by Marianne. Engel has a very mature face and a clear gaze, and so it isn’t too easy to shake off Joseph’s suspicions of murder, either for Abel or for the audience.

The camera style chosen by Garrel and cinematographer Irina Lubtchansky (“Ismael’s Ghosts”) for the first scenes is conventional, even classical, with a lot of measured shot-reverse-shot conversations. But when Paul’s younger sister Eve (Lily-Rose Depp) begins to narrate and tell us about her obsession with Abel, the camerawork gets far less steady and becomes handheld, which gets across the difference in point-of-view between Abel and Marianne and the far less stable Eve, who extols Abel’s hair, of course, and his voice, and takes photos of herself in the passenger seat of his car to pretend like she’s his girlfriend.

Watch Video: When Natalie Portman and Lily-Rose Depp Bonded Over a Massage

Eve is basically a stalker of Abel through most of “A Faithful Man,” and both she and Marianne are far more active characters than Abel is. There has always been a streak of passivity about Garrel as a performer when he has worked in movies for directors like Bernardo Bertolucci, Christophe Honoré (for whom he has been a muse), and his own father Philippe Garrel. He has become a standard-bearer for his generation in French cinema, a more amiable Jean-Pierre Léaud for the 21st century, and while he could seem callow when he was just starting out, time has begun to deepen his emotional resources on screen so that he is becoming more than just the surface he offered in his early work.

Abel is a pawn in “A Faithful Man” being moved around by Eve and by Marianne, who admits that she doesn’t actually know who fathered her child. (She flipped a coin to decide which lover to pick to be Joseph’s father.) Eve declares “war” on Marianne, but Marianne deftly sidesteps this and tells Abel to sleep with Eve and see how it goes, and he semi-reluctantly does so. Eve admits that she had better orgasms with other guys while thinking of Abel than she actually has with Abel, and this is the kind of psychological insight that can be found in Carrière’s best screenplays.

All the while, Joseph is recording practically everything said in Marianne’s apartment, and he even places a phone under her bed to monitor his mother’s sex life. In description, “A Faithful Man” sounds like quite a rich brew, but it is actually more of an exercise than anything else, a chance to play a kind of cinematic shell game with four main characters who are never quite what they seem.

For the last scene, which is fairly dramatic in theory, Marianne is wearing a grey coat with light pink accents that is so striking that it rules the frames with its beauty, and this is the kind of lightly enjoyable film that allows such incidental pleasures to dominate if they care to.