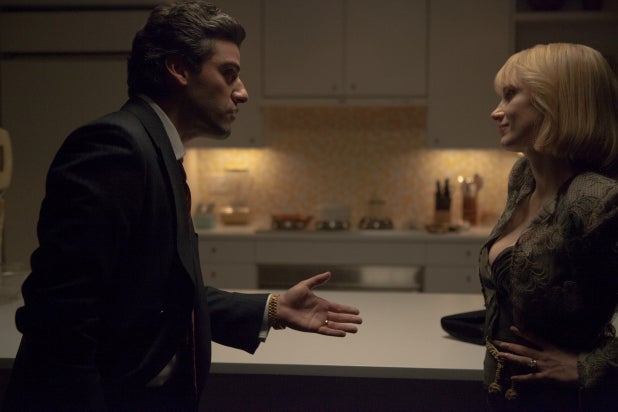 J.C. Chandor’s “A Most Violent Year” has been named the best film of 2014 by the National Board of Review, the NBR announced on Tuesday.

The choice came as a shock, with Chandor’s slow-burn drama much lower on the awards radar than films like “Boyhood,” “Birdman” and “Selma.” But in the release announcing the selection, NBR president Annie Schulhof called the film “an exhilarating crime drama with a compelling story, outstanding performances, and an elegant cinematic style.”

The film stars Oscar Isaac and Jessica Chastain as a couple in 1981 New York who look to expand their heating oil business with a sizable and risky investment. While the NBR is not made up of Oscar voters and does not reflect their taste, the win could push some voters to watch the film at a crucial time in awards season, and could increase the visibility of Isaac and Chastain as contenders.

Clint Eastwood was named the year’s best director for “American Sniper,” which was also one of the NBR’s top 10 films of the year.

The list did not include “Selma,” “Foxcatcher,” “Whiplash,” “The Theory of Everything” or “Interstellar,” among other presumed awards contenders. “Selma,” though, won the NBR’s Freedom of Expression Award.

“Wild Tales” was named Best Foreign Film over “Force Majeure,” “Gett,” “Leviathan,” “Two Days, One Night” and “We Are the Best!,” while “Life Itself” was named the year’s best documentary.

In the last decade, the NBR and the Oscars have only agreed on the year’s best movie twice, with “No Country for Old Men” in 2007 and “Slumdog Millionaire” in 2008.

NBR that have failed to win the top Oscar include last year’s winner, “Her,” as well as “Zero Dark Thirty,” “Hugo,” “The Social Network,” “Up in the Air” and “Letters From Iwo Jima.”

Still, every NBR winner for the last 14 years has at least been nominated for the top Oscar.

The National Board of Review, which owes much of its visibility to its place early on the awards calendar, consists not of film critics but of “knowledgeable film enthusiasts and professionals, academics, young filmmakers and students” in the New York area. It was established in 1909 and has been picking the year’s best films since 1930.

The NBR will hold its annual awards gala in New York City on Jan. 6.