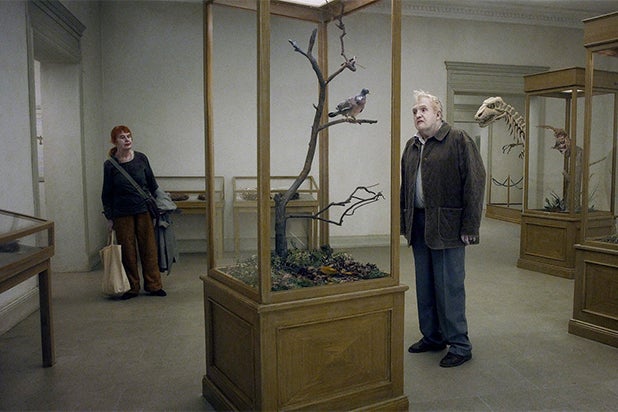 Venice winner “A Pigeon Sat on a Branch Reflecting on Existence” has been acquired by the Wagner/Cuban Company’s Magnolia Pictures, it was announced on Tuesday.

Swedish director Roy Andersson’s film had its world premiere at the 2014 Venice Film Festval, where it took home the fest’s top prize, the Golden Lion. “A Pigeon” is the conclusion to Andersson’s trilogy preceded by “Songs from the Second Floor” and “You the Living.”

“A Pigeon” is comprised of darkly comic vignettes tied together through the misadventures of Sam and Jonathan, traveling salesmen peddling novelty items, in search of a shop called “Party.” As they wander through the town, the scenarios that surround take the viewer on a trip that shows the beauty of single moments, the pettiness of others, the humor and tragedy that is in us, and life’s grandeur, as well as the frailty of humanity.

“We were swept away by the humor, beauty and sheer originality of this film,” Magnolia President Eamonn Bowles said. “For admirers of Roy Andersson, a new film from him is a true cinematic gift. For people that haven’t experienced his films before, ‘A Pigeon Sat on a Branch Reflecting on Existence’ is a terrific place to start.”

The deal was negotiated by Magnolia Director of Acquisitions John Von Thaden with Olimpia Pont Cháfer, Head of Sales at Coproduction Office.

Magnolia is eyeing a 2015 release.