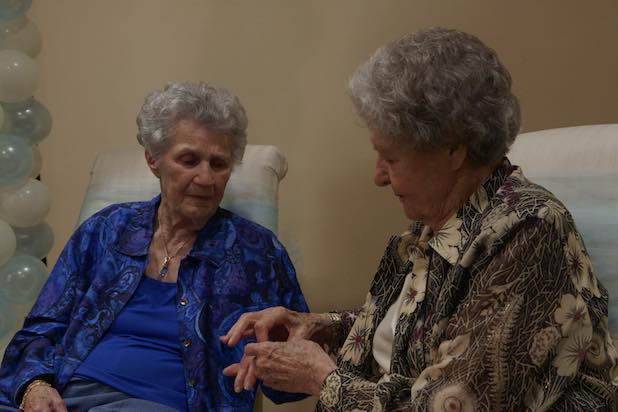 This week, Netflix will premiere a new Ryan Murphy project in which gay characters in the 1940s must keep their sexual orientation a secret for fear of losing their jobs and being rejected by friends and family — but we’re not talking about Murphy’s seven-part miniseries “Hollywood,” which covers some of that territory as it tells a fictional story set against the backdrop of the movie business after World War II.

Murphy’s other Netflix release this week is “A Secret Love,” a documentary directed by Chris Bolan, produced by Murphy and executive produced by Jason Blum, among others. The film, which premieres on Wednesday, deals with a seven-decade relationship between two women who met in 1947 when one of them was playing in the All-American Girls Professional Baseball League, which was later celebrated in “A League of Their Own”.

“A Secret Love” spans more than 70 years in the lives of Terry Donahue and Pat Henschel, beginning when Donahue was a catcher and utility player for the Peoria Redwings, an expansion franchise that began in the fourth year of the AAGPBL’s existence. For most of their time together, Donahue and Henschel pretended to be cousins or close friends; it wasn’t until late in life that they admitted the truth to their own families.

And while the pain and fear that comes with living in the closet for decades hang over “A Secret Love,” the film ends up being about a lot more than sexuality. In a way, the relationship between Terry and Pat is the biggest source of joy in a melancholy film that shows how difficult it is to grow old in America.

(That may be another similarity with “Hollywood,” in which LGBT issues are just one thread of a much larger story.)

Bolan, who is Donahue’s great-nephew, enjoyed intimate access to Donahue, Henschel and Donahue’s family, following them over the course of seven years while the couple considered whether to leave their longtime home in a Chicago suburb to move into an assisted-living facility, either in the U.S. or back in Alberta, Canada, where they grew up. Donahue’s niece (and Chris Bolan’s mother), Diana Bolan, wanted desperately for her beloved “Aunt Terry” to return to her hometown of Edmonton, but Henschel resisted, and family tensions grew.

“It’s always been a competition,” Diana Bolan admits of the quiet struggle for Donahue’s affections between herself and Henschel.

The back story, meanwhile, is told through still photos, news footage and family snapshots. This leads to a certain imbalance: Because the new verité footage necessarily feels more immediate than the women’s memories of times gone by, and because by the time Bolan showed up with cameras Donahue and Henschel were no longer hiding their sexuality, the struggles of being gay in hostile times pack less of a punch than the struggles of dealing with old age and its medical and housing issues.

Still, that back story is crucial. At the time they met, Donahue never even thought about being lesbian; Donahue, meanwhile, had a string of boyfriends, but her fiancé and two subsequent boyfriends both died – causing her, she jokes, to think, “This is not what I’m meant to do.”

The two women fell in love almost immediately, and after Donahue’s baseball career ended they figured it would be easier to stay in the United States. While they found a supportive community there, they stayed away from gay bars in Chicago, which were regularly raided by police who would arrest any woman who they thought was trying to dress like a man.

But they weren’t just keeping their love secret from the cops – it wasn’t until 2009 that the two women came out to their families. That they were able to eventually get married in front of loving family and friends could be seen as a long-delayed triumph of sorts.

But by that point, their lives were difficult for other reasons. Donahue was suffering from Parkinson’s and Henschel fiercely resisted moving back to Edmonton for years, but appropriate facilities near Chicago were prohibitively expensive.

It came down to a blowout of sorts between Diana and Pat, with Terry caught in the middle – a dilemma in which Donahue and Henschel would have to leave the small community of friends for whom their love was never a secret to be closer to the family from which their relationship was hidden.

Affecting at times and downright tear-jerking at others, their story is tied to the saga of gay life in America over the past 70-plus years. Still, it ends up feeling less like a history lesson and more like a universal acknowledgment: growing old with some kind of grace and peace should not be this hard.