Playing Fanny Brawne in writer-director Jane Campion’s film “Bright Star,” Abbie Cornish has what might be considered an unenviable task: persuading audiences that her character, a headstrong, stylish young woman in 18th Century England, is passionately in love with poet John Keats (Ben Whishaw) even though neither of them can show it, and that their love is one for the ages even though it remains chaste. That she pulled if off it evidenced by reviews that are for the most part raves, significant Oscar buzz, and high-profile fans like Quentin Tarantino, who sent Campion a recently-leaked love note to the film that included phrases like “I loved this!!!” and “Never has heartache been so realistically and movingly portrayed as Abbie taking to her bed.”

Cornish came to L.A. from the Vancouver set of Zack Synder’s “Sucker Punch” to do interviews on an auspicious day (though she’d hardly describe it as such): it was the day “Amelia” opened to savage reviews that may have knocked Hilary Swank out of the best-actress race, in the process transforming the 27-year-old Australian from an Oscar longshot into a strong contender. 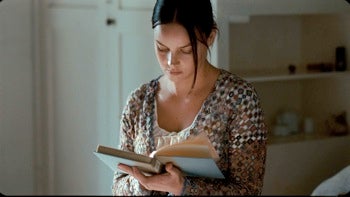 Have you seen the letter that Quentin Tarantino wrote to Jane Campion, raving about “Bright Star”?
I’ve heard about it. I haven’t actually seen it.

Were you surprised to find that he was such a fan?
(laughs) No, ‘cause I’d already seen his enthusiasm. When I was in Cannes, I got into an elevator, and Quentin was in there. He’s such a great director, and I’ve loved so many of his films, that I had to introduce myself to him.

I said, “Quentin, my name’s Abbie. I think you’re a great director, and I just wanted to introduce myself to you.” And he shook my hand, and we made some conversation, and he’s like, “What are you here for?” I said, “I’m here for a little film I did with Jane Campion called ‘Bright Star,’” and his eyes just lit up and his arms started going. He’d literally just come from a screening, and he was so excited about this movie. I’ll never forget that moment.

One of the reasons that “Bright Star” seemed unlikely to be a Tarantino favorite is that it’s so restrained. In that era, Fanny was allowed to let her despair and loss show – but earlier in the film, when she and Keats are falling in love, she’s not really permitted to display those feelings. Was that tricky to calibrate – here’s what she’s feeling, but here’s what she can show?
Yeah. But I kind of enjoyed how complex that made everything. It’s about the ability to express without words, without physical contact – and about this lingering sensation that moments would have, the ominous presence of this thing that they had growing between each other that wasn’t physicalized.

What that allows is a moment like when Keats comes to dinner at Christmas time at the Brawnes. He reaches over and touches her hand, and the moment becomes what it is because of all the tension and the buildup to it. It was fun for me to play more about what’s going on in the mental and spiritual realm than the physical one, even though the physical one is so brimming.

Going in, were you secure in your ability to deliver that?
I didn’t really doubt myself. I had a really strong feeling about the film, felt really connected to it. I don’t know, something felt right about it. And when Ben got involved, his theater background meant he was way ahead of me in the rehearsal process, but it still felt right instantly.

Did you rehearse for a long time before shooting?
Three weeks, which felt like a lot. ‘Cause you don’t usually get that. And it was dedicated rehearsal time, nine to five, undisturbed. Usually you have a week of rehearsal and you keep getting pulled out for hair and makeup, or wardrobe fittings. Jane had everything done either before or after. It was very intimate, very intense, and she went through the script chronologically, which was really great.

Did your understanding of the character or film change during that process?
It didn’t change significantly. The film that I saw in my head when I read the script, the film that we filmed and the film that it is today is all the one film. So there weren’t any huge discoveries or surprises. I learned smaller, more intricate things. Jane never would breeze over anything. We would read it, talk about it, pull it apart and maybe do improvisations on it. And then compact it down to the script again, and give it another go.

It gave me time to embody Fanny Brawne, and let her sit inside me, so I knew how she was physically, how she thought about things.

Far more has been written about Keats than about Fanny Brawne, and his letters to her survive while hers were destroyed. Researching the part, did you find lots of gaps in the record?
There were so many gaps it was crazy. All that was left were tiny bits and pieces, like flecks. The good thing for me was that Jane had already done the hard work of bringing her to life, making her whole, and so for me it was just the job of taking it a little further and making her physically present. Jane had very specific ideas about how she felt about Fanny Brawne, and of course I did two. We kind of amalgamated what we felt about the character.

Were there moments where Jane had an idea and you said, “I don’t really see her that way?”
Yeah. We definitely had many moments, because we were both so invested in this character and this story. That was what made the film what it is, because we never let anything slip under the radar. She would challenge me, and I could challenge her.

Can you think of specific scenes where you disagreed?
I reference this scene a lot, for so many different reasons. But at the end of the film, where Fanny is walking along the heath saying the poem “Bright Star,” Jane had the idea that she wanted maybe to break it up, like Fanny was trying to learn it. Like, “bright star…bright star…would I were steadf…would I were…”

And I was like, “Jane, we cannot do that to Keats’ poem. I will not have that happen. She knows this poem by heart, word-for-word. She’s Keats’ girl, and this is for him. We’ll be doing Keats an incredible injustice if we’re learning his poem right now.” I think I was unstoppable with that thought, and so we ended up doing it that way – which was the way Jane originally wrote it, too.