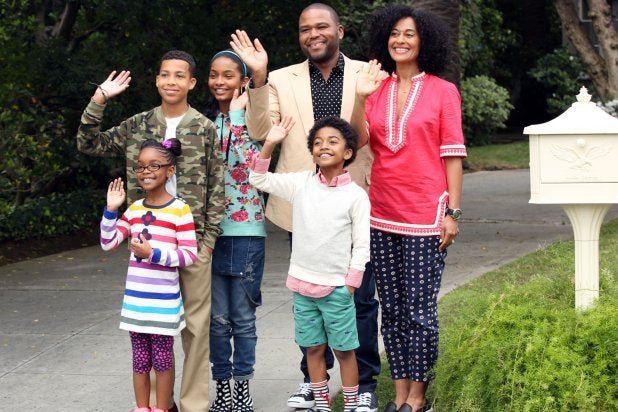 ABC has ordered more episodes of comedies “Black-ish,” “Modern Family,” “The Goldbergs” and “The Middle,’ and dramas “Grey’s Anatomy,” “Castle,” “Once Upon a Time,” and “Resurrection.”

Midseason series “American Crime” also received an additional order, bringing it to a total of 11 episodes.

Wednesday’s comedies are doing well for ABC, each receiving an additional two-episode order.

The extension for “Black-ish” arrives after ABC’s previous 9-episode order for the Kenya Barris comedy, which brought it to a full season. The family comedy has been averaging a 3.4 rating (Live plus same day) in the advertiser-coveted 18-49 demographic and was generally loved by critics. It’s the highest-rated new comedy of fall.

Emmy darling and highly-rated “Modern Family,” which has helped “Black-ish” as its lead-in at 9:00 on Wednesdays, was also a no-brainer in its sixth season, which is averaging a 2.7 rating.

“The Middle” is hanging in there at 8 p.m. with an average 2.1 rating in its fifth season so far. And “The Goldbergs” in its sophomore season is improving on that with a 2.3 at 8:30.

That leaves new comedies “Selfie,” with its 1.2 rating, and “Manhattan Love Story,” which is averaging a 1.0, out of the episode-ordering frenzy.

As for dramas, “Once Upon a Time’s” Season 4 is definitely not frozen on Sundays at 9 p.m. It premiered to a huge 3.5 rating and fell to 2.7 in the following weeks, but it rebounded to its current 3.1 average rating. It received an additional one-episode order.

“Resurrection,” which follows “OUAT” at 9 p.m. on Sundays, may have stabilized its ratings this past week, earning an average 2.5 rating. It receives an additional episode order, bringing its current total to 13 episodes.

“Castle,” which is in its seventh season, is seeing a continual decline week-0ver-week on Mondays at 10 p.m., and is currently at a 1.8 rating. But, the show has a cult following and is beloved by TV bloggers. So, this extra episode order is not a huge surprise.

Meanwhile, “Scandal” stays at 22 episodes. And “How to Get Away With Murder” remains at 15, which is in line with star Viola Davis‘ contract.