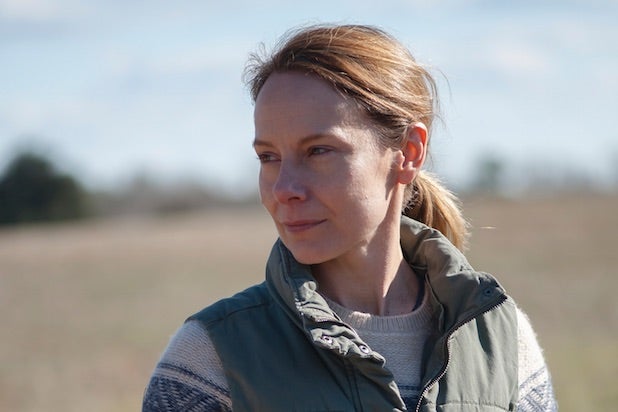 The presence of Martin Scorsese as an executive producer no doubt drew some of the crowd to Thursday night’s Tribeca Film Festival premiere of “Abundant Acreage Available,” but the ties between Angus MacLachlan’s family drama and Scorsese’s work were not in areas (violence, Italians, “Gimme Shelter”) usually associated with the legendary director.

Instead, it was the little areas where you could see a connection: a serious examination of religious faith, a look at family dynamics and a vividly drawn sense of place — in this case not Little Italy, but a modest family farm somewhere in North Carolina.

And the audience didn’t leave “Abundant Acreage Available” thinking about Scorsese — because this movie belongs to actress Amy Ryan, who gives a haunting, quietly commanding performance as a fortysomething woman who lives with her brother (Terry Kinney) on a small tobacco farm.

Ryan and Kinney’s characters have only recently buried their father, who died after a long illness, when three brothers (Max Gail, Francis Guinan and Steve Coulter) show up and pitch a tent on their property. The men furnish a suspicious story about car trouble and show no great hurry to move on.

“Abundant Acreage Available,” a movie looking for a distribution deal at Tribeca, is all about quiet, stillness, grief and faith. And the movie itself is quiet and still, set in the dead of winter when little seems to be growing and we rarely even see the birds that fly overhead. For long stretches, there is no score, just the sound of wind; when music creeps in, it does so softly and then goes away again.

Voices are raised and there’s even some violence, but it’s understated; the three mysterious brothers are a soft, enigmatic threat, not an overt one.

The performances are strong: Kinney as a man looking desperately to religion as a way to forgive himself for a tragedy; Gail as a curious spokesperson for the trio of squatters; and especially Coulter as the quietest of the brothers, whose rectitude has those around him deciding that they know what’s best for him (and for Ryan’s character).

His scenes with Ryan are among the film’s richest and most satisfying, but the actress holds the screen no matter what she’s doing and who she’s with. There is no vanity in her portrayal of a woman who looks beaten down but has chosen the life she’s leading, and who is roused to protect her lifestyle when it suddenly seems threatened for reasons that make little sense to her.

MacLachlan is best known for his script to the 2005 drama “Junebug,” which brought another Amy — in that case, Adams — her first Oscar nomination. He knows how to sketch small-town lives keenly and sensitively, even if his tone of somber ambiguity does not always lead to wholly satisfying drama.

But for an audience willing to be patient and drift along with the quiet drama — which is to say, most of the audience at Tribeca’s Cinepolis Chelsea on Thursday night — “Abundant Acreage Available” is a slow ride worth taking.