The Academy of Motion Picture Arts and Sciences has a message for actors:

That was the main point hammered home at Thursday night’s “Acting in the Digital Age” panel at the Samuel Goldwyn Theater. The evening was hosted by the Academy’s Science and Technology Council, but council member Barry Weiss admitted in his opening remarks that it was aimed squarely at “the Academy’s largest branch, the actors branch.”

And the message, conveyed repeatedly by effects whizzes and animators and a stunt coordinator and a producer and several actors, was that flesh-and-blood performers will not be replaced by digitally-created performances. Honest.

“Part of this evening, I think, is about allaying fears, particularly among the actors’ community,” said actor Andy Serkis, who played Gollum in “The Lord of the Rings” and the title character in Peter Jackson’s “King Kong” remake.

“At the end of the day, acting is acting.” 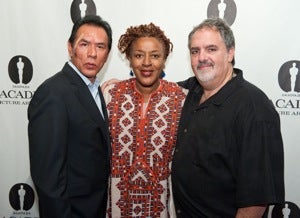 Until actor Wes Studi (“Avatar”) upset the applecart at the end of the evening by daring to suggest that the film’s performance-capture technique had room for improvement, the two-and-a-half-hour show played like a tribute to new technology, and how it can be used to augment (but never replace) actors’ performances.

The event came together after an awards season in which many speculated (perhaps unfairly) that one of the reasons “Avatar” might not have won Best Picture is that the Academy’s actors branch might have been uncomfortable with the implications of a film in which half the main characters were never seen in human form, but only as a computer-generated alien race, the Na’vi.

And it was hosted by Academy governor Bill Kroyer – who, in this same room less than seven weeks ago, had openly mocked “Avatar” for not admitting that it should have been in the running for the Best Animated Feature Oscar.

This time, though, Kroyer was complimentary, and “Avatar” was the clear star of the show, with the 12 panelists including its producer (Jon Landau), animation supervisor (Richard Baneham) and stunt coordinator (Garrett Warren), as well as three of its actors (Joel David Moore, CCH Pounder and Studi).

After a opening chat with Serkis via Skype, necessitated by the fact that the actor couldn’t get a flight out of London in the aftermath of the volcano in Iceland, Kroyer led the the panelists through discussions of the “digital doubles” used to create performances by the late Marlon Brando in “Superman Returns” and Oliver Reed in “Gladiator”; a nod to makeup-oriented transformations in films like “The Elephant Man” and “Mask”; and an extensive discussion of how Brad Pitt’s performance was achieved in “The Curious Case of Benjamin Button.”

“We don’t want a team of animators making up the performance,” said Steve Preeg, an Oscar winner for “Benjamin Button.” “ … It’s necessary to use the actor’s actual performance.”

(Actress Emily O’Brien might beg to differ: she’s the subject of a computer-created double, “Digital Emily,” which she said preserves all her idiosyncracies: “It really is me. I can’t find any differences.”)

There was lots of talk about motion capture until the “Avatar” team came onstage for the final segment of the evening – whereupon Landau announced, “We call it performance capture, not motion capture, because there’s more to the performance than just motion.”

He even tried to sell the technique as more true to the art of acting than traditional filmmaking, because it doesn’t require actors to wait for sets to be lit and cameras to be ready.

The only snag in this lovefest to new technology came when Studi, who played a Na’vi warrior and rival to Sam Worthington’s Jake Sully, pointed out – quite rightly, you could argue – that “the melding of technical expertise and the performance” was in its infancy, and that there’s still something a touch artificial about characters like the Na’vi.

“To a certain extent [the performance] is enhanced, but in a way it is hindered as well,” he said. “The technology hasn’t gotten quite to the point of organic feel … They’re not quite as organic as we would like to see them.” 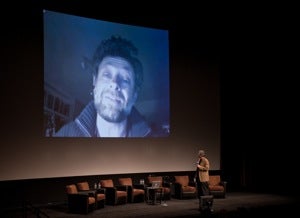 But Studi’s remained the lone voice of even slight dissent. More typical were the closing remarks from Andy Serkis before he signed off and went back to bed (since it was 4 a.m. in London):