You may have noticed that documentaries often come in groups: there are lots of films about Iraq (“Taxi to the Dark Side,” “Iraq in Fragments”), films about the environment (“An Inconvenient Truth,” “Encounters at the End of the World”), films about the economy (“Enron: The Smartest Guys in the Room,” “Capitalism: A Love Story”) …

For the Academy, that kind of repetition is a very good thing. 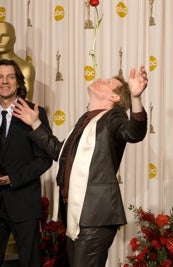 The organization kicks off its 28th annual Contemporary Documentaries screening series on Wednesday, Sept. 30, at its Linwood Dunn Theater in Hollywood — and, says Ellen Harrington, the AMPAS director of exhibitions and special events, it’s crucial that they find films of similar subject matter to put their evenings together.

“We have a core audience that loves documentaries and will come to see anything we show,” she says of the series, which generally pairs two features and a short, and is free of charge to the public. “But we find that there is a larger audience of viewers who are drawn specifically to the topic, so it’s important that we find complementary films.”

Most of the time, she says, that isn’t hard.

“Occasionally we end up with a film that’s unique and doesn’t have a great pairing, but usually we have a lot to work with.”

The series always includes the previous year’s Oscar nominees in the documentary feature and short categories; to fill out the programs – six between Sept. 30 and Dec. 9, and a second group in the spring – the programmers move to the shortlisted documentaries in the two categories. And sometimes, adds Harrington, they’ll turn to a doc that didn’t make the shortlist, but may have been recommended by a member of the documentary committee.

This fall’s programs, for example, include three nominated features (“Encounters at the End of the World,” “The Garden” and the winner, “Man on Wire”) along with five shortlisted films that didn’t make the final slate (“GLASS: a portrait of Philip in twelve parts,” “Pray the Devil Back to Hell” and Stacy Peralta’s "Crips and Bloods: Made in America" among them) and another two that didn’t even make the shortlist, "Flow" and "David McCullough: Painting with Words."

There’s an evening of L.A. films, an evening of environmental films, a pairing of “Man on Wire” with “In a Dream,” about a Philadelphia-based urban artists, and three others. (Above, the subject of "Man on Wire," Philippe Petit, clowns around in the press room after the film’s win last February.  Photo: Bryan Crowe/AMPAS)

“Sometimes I’ll look at a film and wonder why it wasn’t nominated,” admits Harrington. “But I usually find that the voters have done a good job – the level of quality is really very high.”

The press release and full schedule of films is here.