The Academy didn’t want to follow in the footsteps of the Emmys and the Tonys by hiring Neil Patrick Harris to host.

Instead, they followed in the footsteps of "Saturday Night Live."

The hosts for the 82nd Oscar show, Steve Martin and Alec Baldwin, also happen to be the two most frequent hosts in the history of NBC’s late-night comedy show.

The choice of Martin shouldn’t come as a complete surprise: He hosted the show twice before, to generally positive reaction, and his name was frequently mentioned as producers Bill Mechanic and Adam Shankman looked for a host. 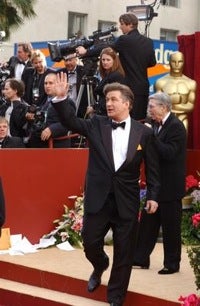 When hints surfaced that Mechanic and Shankman were looking in the direction of a pair of hosts, Martin stayed on the radar — though usually paired with Tina Fey, with whom he made an appearance that was acclaimed as one of the highlights of the last Oscar show.

Now it turns out that it’s Baldwin, Fey’s co-star on "30 Rock" and an actor with stronger film credentials, who gets the gig instead.

The move away from a single host marks a break with the tradition of the past 20 Oscar shows. In 1989, producer Allan Carr used no host and relied on two dozen "friends of Oscar" to present the awards; in the aftermath of what was seen as a disastrous show, an Academy committee recommended sticking to a single host, and that recommendation has been followed ever since.

But a pair of hosts was extremely rare even before that. The format has been used exactly three times in the 81-year history of the Oscars, and never in the past 53 years.

Bob Hope and Jimmy Stewart did the honors in 1946, almost a decade before the first Oscar telecast. Hope and John Cromwell did it the previous year. And back in 1929, the first Oscar ceremony was hosted by Douglas Fairbanks and Academy president William C. deMille.

That’s it. Otherwise, according to the Academy’s official histories, 62 Oscar shows have had a single host, three have used three hosts, six have used four hosts, and a couple, like Carr’s show, went with double-digit assemblages of "friends of Oscar."

As for the new hosts, they may not have the song-and-dance chops of Hugh Jackman — though Martin showed off some fancy moves in "Pennies From Heaven" — but at least one of them should help make things easier for the show’s rookie producers. 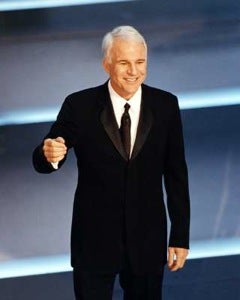 The two previous times he hosted the show, Martin was the most easygoing emcee imaginable.  Where other often hosts sweated over their material, kept rehearsals closed and enforced an air of secrecy that verged on paranoia, Martin routinely tested his monologue in rooms full of staffers.

He also drove to the theater in his own car and required little of the special treatment routinely granted to Oscar hosts.

Garry Hood, the stage manager in charge of dealing with the host, was amazed when he worked with Martin in 2001 and 2003.

"There’s low-maintenance, there’s high-maintenance, and there’s Steve Martin: no maintenance," he said.  "Normally a host comes off[stage], I hand them their script for the next bit and then tell them how long they’ve got. Steve comes off, and before I can say anything he says, ‘I know.  Item 42, I’m introducing Julia. I’ll see you in five minutes.’"

The Tuesday-afternoon press release announcing the hosts, by the way, was something of a coup for the Academy. Ever since previous information about the show was broken early, AMPAS has sweated over ways to make the producer announcement on its own terms and in its own time.

"We’re exploring our options," said a nervous official a week ago. "The problem is that when you get to a certain stage in the process, you start to involve agents and publicists. And that’s where you get leaks. It’s become a real problem, and I don’t know what we’re going to do about it."