When the Academy Museum of Motion Pictures opens to the public on Thursday, it will be the culmination of a process that began either 93 years ago, 70 years ago, 15 years ago or 10 years ago, depending on when you decide that the project began.

The museum contains 300,000 feet of exhibition space in two separate buildings, a 1939 Streamline Moderne structure that used to house the May Company department store and a new spherical addition that contains a 1,000-seat movie theater and a roof deck that was already used as the site of musical performances on the Oscar show in April.

You could say that the seeds for the museum were planted in 1929, when the Academy, two years after its founding, first talked about creating a museum for motion pictures. And that it took another step in the 1950s, when rival studio bosses Walt Disney and Jack Warner tried but failed to get an AMPAS Hollywood museum off the ground. But the recent museum timeline didn’t begin until the 21st century, so let’s fast-forward there to begin our timeline. 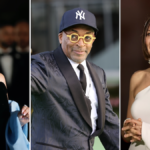 The Academy pays a reported $50 million for a 3.5-acre site next to its Pickford Center for Motion Picture Study on Vine St. in Hollywood. To acquire the entire block, the organization has to deal with individual business owners and, in some cases, to pay above-market value in a boom market for property.

AMPAS announces that French architect Christian de Portzamparc will design the museum on Vine, which will have an estimated cost of $200 million. Before long, that figure rises to more than $250 million.

The global financial crisis of 2007-08 causes the worst recession since the Great Depression. Fundraising for the Academy’s museum project dries up. The lot on Vine St. sits empty.

October
The Academy’s Board of Governors approves a plan to partner with LACMA and locate the museum at the historic May Company department store building adjacent to and owned by the museum, which acquired the building in 1994 and had been using it for exhibitions and office space. By using an existing building rather than erecting a new structure from scratch on the site in Hollywood, the Academy hopes to keep the budget to less than $200 million.

December
Disney CEO Bob Iger is appointed chair of the fundraising campaign for the museum.

March
The Academy says that it is on track to raise the first $100 million in financing, and that it will soon hire an architect for the project.

May
The Academy announces a new series of programs, Oscars Outdoors, which will take place at an open-air theater to be constructed at the site of what would have been the museum on Vine. It spends $2 million to prepare that location for the screenings.

Architects Renzo Piano (from Italy) and Zoltan Pali (from Los Angeles) are chosen to collaborate on the new museum design.

October
The fundraising campaign hits its initial $100 million goal, the first step toward raising the estimated total cost of $250 million. The Academy reveals Piano and Pali’s plans, which include incorporating most of the existing May Co. building (a landmark whose exterior cannot be significantly altered) but also adding a huge globe and dome, designed by Piano, that will adjoin the building and house a theater.

April
David Geffen donates $25 million to the museum, its single largest gift to date. The Academy tweets plans for the dome and unveils more details of the design. It also offers a look at some of the items in its holdings and suggests that the museum will open in 2017.

January
After waiting a few years for property values to rise from their recession levels, the Academy sells its Vine St. property to Kilroy Realty Corp. for $46 million, sustaining a slight loss. Kilroy announces plans to create a multi-use office and residential campus.

February
The Academy says it has raised two-thirds of its goal, which by now has been raised to $300 million.

The Academy files a Draft Environmental Impact Report with the city of Los Angeles.

The Los Angeles Times’ Pulitzer-Prize-winning architecture critic, Christopher Hawthorne, rips the design, specifically Piano’s dome, writing, “Its architectural centerpiece … is an oversized bauble that looks as if it’s just touching down for a short stay. As a piece of urban design the theater is trapped in a kind of retro-futuristic limbo, with little to say about contemporary Los Angeles.”

May
Zoltan Pali leaves the project, reportedly after conflicts with Piano.

October
The Academy temporarily halts some of its grant programs because of the museum’s impact on its finances.

It also uses the May Company building, which has yet to undergo renovation to house the museum, to present an exhibit called “Hollywood Costume,” co-presented by the Victoria and Albert Museum in London.

The AMPAS board approves raising the fundraising campaign goal from $300 million to $388 million.

September
AMPAS reaches an agreement with Fix the City. Demolition of parts of the building begins.

The Academy reinstates its grant programs after a one-year hiatus.

December
A Board of Trustees is formed to handle oversight of the project; it had formerly been the province of the AMPAS Board of Directors, many of whose members have been outspokenly critical about the museum’s financial drain on the Academy.

The project’s chief fundraiser, Bill Kramer, leaves to take a job on the East Coast.

January
The Academy announces that it has received a donation of the last surviving full-size shark model from Steven Spielberg’s 1975 hit “Jaws.”

March
Construction begins on the sphere.

February
The Academy delays opening from late 2018 to spring 2019.

March
The project switches its chief builder for final phase of construction.

The board of governors hold a contentious meeting at which Dawn Hudson’s oversight of the museum, and the cost overruns, are a topic of discussion. In the end, the board renews her contract for three years.

September
Cheryl and Haim Saban give the museum its single largest donation, $50 million. The former May Company building is renamed the Saban Building in their honor.

The Academy hosts a press briefing and tour of the under-construction museum.

December
Ron Meyer, Tom Hanks and Jason Blum are among the industry figures named to the Academy’s Board of Trustees.

March
During the Oscars telecast, the museum runs an ad for the museum that purports to be from the Overlook Hotel, the mountain hotel in Stanley Kubrick’s film “The Shining.”

April
Producer Bill Mechanic resigns from the Board of Governors and releases an open letter whose complaints include, “We have failed to solve the problems of the Museum.”

December
The museum unveils a programming lineup that include special exhibitions devoted to Black cinema and Japanese animator Hayao Miyazaki. It also hosts a party to unveil the fully restored May Company building, renamed the Saban Building.

April
The George Lucas Family Foundation gives the Academy Museum a grant that will create an endowment underwriting free admission to the museum for all visitors 17 and under. The grant is made in honor of Sid Ganis, former Academy president and current chair of the board’s Museum Committee.

June
The opening date is delayed until at least after the Oscars in 2020. In explaining the latest delay, an Academy spokesperson cites “a highly complex construction effort.”

August
Museum director Kerry Brougher steps down and is given the title of honorary founding director.

October
Bill Kramer returns and is appointed new director of the museum. He moves forward with plans to revise much of Brougher’s plan for a permanent exhibition that would take up most of the museum in favor of more individual exhibits and an increased emphasis on diversity and underrepresented voices.

February
Two days before the Oscars, the Academy gives the media a tour of the museum, which is largely finished but does not yet have any exhibits installed.

During the Oscar ceremony, Tom Hanks announces that the museum’s opening date will be Dec. 14, 2020.

The museum issues an additional $100 million bond offering and launches a post-opening funding campaign that will bring the total budget to $482 million.

March
The COVID-19 pandemic shuts down businesses across Los Angeles, with the Academy staff shifting to remote work. Construction on the museum continues.

September
Ted Sarandos is elected chair of the museum’s Board of Trustees, replacing Ron Meyer, who resigned from that position after also leaving his position as vice chairman of NBCUniversal following a disclosure that he paid a woman who tried to extort him over an extramarital relationship.

November
The Academy announces that it has exceeded its fundraising goal of $388 million. The shark from “Jaws” is installed over an escalator.

December
On Dec. 11, Bill Kramer says that the museum is “absolutely on track” for its scheduled April 30 opening, assuming the pandemic allows.

A week later, the opening is postponed from April 30 to Sept. 30.

Netflix leases the entire 355,000 square feet of office space at the Vine St. site that was originally planned to be the site of the Academy Museum.

April
For the 93rd Academy Awards, performances by H.E.R., Celeste, Leslie Odom Jr. and Laura Pausini are filmed on the roof deck atop the museum’s David Geffen Theater.

August
Tickets for the museum go on sale. Admission is $25 for adults, $19 for seniors and $15 for students. A separate $15 ticket will be required for “The Oscars Experience,” an immersive simulation that allows visitors to feel as if they are walking onto the stage of the Dolby Theatre to accept an Oscar.

The Academy announces that it is naming the lobby after Sidney Poitier.

September
On Sept. 30, the museum opens to the public after a week of private events. Well before the opening, tickets — which are sold for specific times in order to control the size of crowds — sell out for all weekend days until late October. 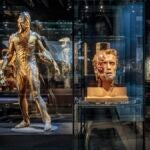