Academy president Tom Sherak recently told TheWrap that the buck really stops at the desk of Bruce Davis, the organization’s executive director for the past two decades. Though Davis laughs that “it’s best for executive directors to deflect such comments whenever possible,” he agreed to address the challenges AMPAS faces in a time of declining Oscar viewership and uncertain finances.

Is it accurate to suggest that the Oscars have reached something of a crisis point?
Yes. Clearly, it’s tricky when an organization has essentially one source of income, which happens on one day a year. And in recent years we’ve been threatened both by world political situations and by the Guild negotiations. If we had a down year like the Golden Globes did (in 2008), that would be a nightmare for us, a complete disaster. So yeah, we need to be feeling our way very carefully to see if there’s still a way to run an operation this complex and this worthwhile in a new kind of environment.

What changes do you think are needed in the Oscar show itself? 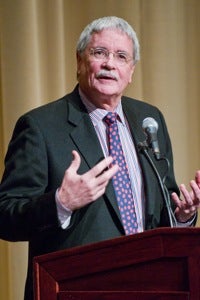 We get lots of help with that from the general public, the membership and every film critic in the country. And we’ve considered lots of wild things, although at this point I think we have decided not to do anything terribly radical.

Our philosophy is that the key craft areas that we give Oscars to are worth continuing to recognize, and to recognize on the same evening. We need to move the show more rapidly and streamline it, but I think we can do that without taking away any awards.

Does that mean an option like eliminating the three short-film categories, which at one point was very close to happening, is now completely off the table?
It’s not on the table right now, but I think we are absolutely in an era where we have to try things. In that sense, nothing’s off the table. If a year comes when we decide you just can’t do 26 awards in three hours, then I think we have to look hard at maybe doing some of the awards prior to the show, or interstitially.

Did the recommendation to move to 10 Best Picture nominees come from this year’s Oscar show producers, Bill Condon and Laurence Mark, or had it been discussed before that?
They certainly recommended it, but there had been other groups talking about it. We got a lot of suggestions that we should sub-divide the Best Picture category, as other awards shows do. Once you start doing that, you could have dramas and comedies and musicals and science fiction films and whatnot.

But what we didn’t like about that is that as soon as you subdivide it, you’re not really committing to a Best Picture anymore. You’re saying, “Okay, this was the best of that subsection, and this is the best of this subsection.” We’d like to continue to say, “Out of all the different kinds of movies, this one we think was the very best.”

The 10 nominees give us a way to do that, and at the same time it allows a broadening of the playing field. It seems reasonable that we ought to get the best of the action films, the best animated films, maybe even a doc will sneak in there. Maybe you will begin to see a more representative spectrum of the good work being done.

Are you genuinely confident that will happen, rather than those extra nominations going to the kind of movies that usually get the first five slots?
[laughs] Well, let’s say that I have certainly thought about what you just suggested. If we get ten small, angry movies, then this didn’t work.

It is true that in the past, we have tended to focus more on terrific movies, but movies that may not even be available to the wider audience because they don’t even play in mid-sized cities. It’s difficult to see how you can get people enthusiastic about movies they’ve barely heard of.

It has been suggested in some quarters that the studios lobbied for the move to 10 nominees. Any truth to that?
There was absolutely no lobbying whatsoever, despite what you might read in certain blogs. We have a studio head on the board of governors (Jim Gianopulos from Fox), and he didn’t lobby for it. It’s bizarre that people are saying that as if of course, everybody knows it happened. It simply didn’t.

What other recommendations came out of the review process after the last Oscar show?
Nothing that will surprise you. We usually hear a lot of negative things after the show, because the people who bother to write you are usually people who don’t like something. Whereas this year, it was about 90 percent favorable.

The comments were overwhelmingly enthusiastic about two things: our host, Hugh Jackman, and the new approach to the acting awards, with the five past winners talking about the five nominees. And that’s an interesting thing in itself. Can you do that with the acting awards year after year, or does it begin to get stale? I don’t know.

It certainly worked once, and we’re not going to throw it away this year without a lot of thought.

How has this economy affected the Academy
We continue to be very, very fortunate in terms of the non-profit world. Our agreement with ABC runs though 2014, so in that sense we’ve been a little protected against the financial bad weather. On the other hand, our investments didn’t do so well over the last year or so.

We’ve been used to getting another nice chunk of money from the portfolio, and that did not happen this year – although we were far less affected than many others. You hear stories of college endowments dropping 25, 30, 35 percent, and we were nowhere near that badly off. We’re extremely conservative in our approach, which bothers people in times when the market is jumping wildly upward, but that strategy paid off this year.

You signed a deal with ABC on the heels of the 1997 Oscars, the “Titanic” show, which had the awards’ largest audience ever.
Not a bad time to do it.

With the Oscar ratings significantly down since then, it seems reasonable to anticipate that in 2014 you probably won’t get the same kind of money.
Let’s just say that I anticipate a trickier set of negotiations with the network. I don’t think anybody can really predict what will happen with television in general, much less with our little one-night venture into it. But I think you’re right – it would be foolish for us not to anticipate that we’re moving into a new era in terms of sources of income.

When you first built up the Academy endowment 20 years ago, weren’t there similar worries about television income?
This was way back in the late ‘80s, and it was clear that the television dial — it was still a dial at that point — was fragmenting. And it seemed that a day might come when we couldn’t get the same kind of license agreement from any network that we’d been used to. Everything was going to fragment, and nobody could afford to pay that kind of money. So I recommended the endowment, on what turned out to be a false premise.

What I hadn’t foreseen is that while the audience might get smaller and smaller, the number of occasions when an audience of even that size was gathered in front of the television was becoming rarer and rarer. So the sponsors, for a long time, were willing to pay much more than they had been paying, and the income didn’t go down from the show.

Now we may be entering a new era, and we’ll have to see how it works out.

Could the income from the endowment and the portfolio cover the operating costs if money from the ABC deal drops?
Well, the endowment was set up to support only the Academy library, which, in a good year, it does. We have some other investments besides that. But there are conditions under which we would simply have to shrink some of what we do. I wouldn’t say we’re there yet, but we’re not in an expansive mood.