Tom Sherak became president of the Academy in August, shortly after the board of governors voted to expand the Best Picture category from five to 10 nominees. In his first seven months in office, he hired producers Bill Mechanic and Adam Shankman to oversee the 82nd Oscar show; presided over his first Nominees Luncheon and Sci-Tech Awards; announced the Oscar nominees on live TV; introduced the inaugural Governors Awards ceremony; and served on the committee that made the controversial selection of who to include and omit from the Oscars’ “In Memoriam” sequence.

Sherak, a longtime studio executive, talked with theWrap about his initial Oscars experience this week. 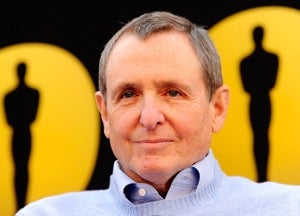 What did you think of the show?
Well, I learned a hell of a lot, I gotta tell ya. It was a real interesting learning experience, watching as the producers put it together.

That show is as tough as anything I’ve ever seen in my life. Can you imagine putting on a show like that, and you’ve got the people who are in the show for five or 10 minutes one day, and then you’ve got stand-ins. It’s hard. I thought they did a number of things that were brilliant and heartwarming and heartfelt.

And I’ll answer the next question for you before you ask me: Could it have been shorter? Yeah, of course I would love it to be shorter. But we’ve done a lot of research, and we know it played very well to America in general.

Can you be more specific about what your research showed?
When it comes out, I think you’ll see that more Americans stayed with the show than ever before. I think you’re also gonna see that the demos got a little bit younger, which is what the producers were trying to do.

We’ve also got independent research that shows that Steve and Alec played very good, that the people liked the show, basically. And I think the ratings showed you that.

And one more thing – those ratings were a little bit impacted by what happened in New York. Three milliion people – and I’m not saying all 3 million would have tuned in – but 3 million people did not get the signal until 18 minutes into the show.

When I spoke to Adam and Bill a few days before the show, and then again reading some of the things they said afterwards, there seems to be frustration over things that the Academy said they could take out of the show, and then forced them to put back in.
The piece the Acacdemy asked them to put in the show, the total time was less than two minutes. I don’t think that determined that the show went three hours and 32 minutes without credits.

But it’s always about making tough, tough choices. Do I run this package, do I run that package, do I leave this out, do I put this in? Do I walk people out, do I sit them closer? How do I cut time? It’s a difficult thing.

You’ve been soundly criticized for not including Farrah Fawcett in the memorial package. Is "In Memoriam” worth it?
Yes, it absolutely is. The organization has to recognize its past. It’s a very tough thing to do, and every year it seems that people somebody believes should be in are somehow not in. These are hard choices to be made, tough decisions, and it’s not done flippantly. It’s done with a lot of conversation on why this person belongs and why this person belongs. A lot.

Sometimes we make mistakes, and sometimes we make the right decisions even though other people think they’re mistakes. I thought that the committee picked really interesting people who’ve contributed. But you just can’t do everybody. And there were some people that passed away this year that were also major stars.

Did you sign off on changing “And the Oscar goes to … ” to “And the winner is …?”
Yes. We had all these conversations about being more relevant, and how do we get into the world today? So Bill and Adam came and said, “Listen, this is what we’d like to do. If the Academy doesn’t want to do it, we won’t. But to us, this is a contest. And in a contest, there’s a winner.”

At the Nominees Luncheon, and in letters and meetings, we tell the nominees that they’re all winners. But that night, only one person walks away with that statuette.

In my mind, does it sound better saying, “And the Academy Award goes to…”? Yes. But my feeling was, if that’s what they want to do, as a small part of what they felt would increase the sense of competition, OK.

Assuming that you’re still president, what will you do differently next time?
One thing that I intend to do is to get a producer on earlier. I think that you‘re very much hamstrung by waiting until September or October. Maybe not tomorrow, but I would go looking night away and hopefully announce that producer sometime in early summer. And let them get their house in order.

We also need to figure out how you truly save time. Bill did his best, I swear to you. He wanted a shorter show, he tried to make it shorter. There are constraints to doing that. So what can you do that can really make an impact?

Everybody loves the actors introducing the actors. A lovely thing, but it takes time. You have to make decisions about film packages. Do you have to have a package for everything? Maybe not — but, you know, this was the first year that I walked away actually knowing what sound mixing and sound editing are. And I got to see Batman on the screen again.

That particular segment, which explained the sound categories by using scenes from “The Dark Knight,” did come across in some ways as an excuse to get that movie on the Oscar show, even though it came out in 2008.
Yeah, well, I don’t think that was the reason. Maybe if I had been involved it would have been, since I told everybody that I thought that was the best movie of the year. But that wasn’t the reason. 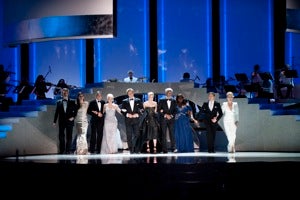 You could certainly have cut time by getting to the hosts faster, instead of having all the Best Actor and Best Actress nominees come onstage (left), and then walking them to their seats, and then doing a song-and-dance number with somebody who’s not the host of the show.
You know how long that song was? A minute and 25 seconds. Their feeling was it needed to have a lot of energy at the beginning, and then bring the humor in quickly. A minute and 25 seconds, that’s not a lot of time.

(Laughs) And, you know, nobody’s mentioned it, but I probably saved 48 seconds by not giving a speech.

Did the expansion to 10 Best Picture nominees achieve what you wanted?
Absolutely. I think the stars lined up in the right direction. I think it was a good idea that the producers had last year, and then the voters gave us what we wanted, which was a wide variety of movies.

So it’ll definitely be back?
My hope would be that it would continue. We have to talk with the board about it, but when we decided to try it, the understanding was that we would try it for two or three years to see what happened. From our perspective it was extremely positive, but I think you need to let it happen a couple more times before you can actually judge it.

I mean, you know as well as I know that there were certain pictures in that 10 that couldn’t possibly win. But the bottom line is, for that moment in time, they were nominated for an Academy Award. That’s a big thing, and nobody is gonna talk me out of the fact that it’s good for Hollywood, it’s good for the business to have people involved in that night, and people in the real world talking about movies.

I read somewhere that the uptick on some movie wasn’t great out of the Academy Award nominations. Well, the world has changed from when the Academy Awards meant a lot of money to somebody who was nominated. It’s not how business is done anymore. But the bottom line is, people talked about “An Education,” you guys wrote about “An Education,” you wrote about “A Serious Man,” movies that maybe you would have forgotten as it got closer to the end of the year.

But it’s a very difficult thing to do. Most people, I guess, see the movies on the DVDs. The question would be, would the Academy members look at them if we sent them? And don’t forget, we don’t send them out, the studios send them out. Would I like to figure out how to do that? The answer is absolutely.