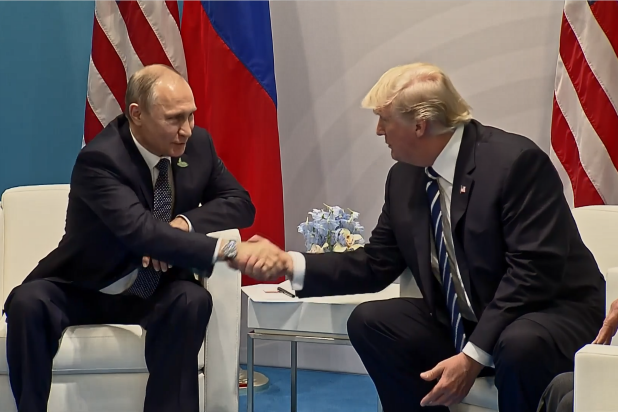 If the constant onslaught of revelations about the Trump administration’s relationship with various foreign nationals doesn’t already give you grey hairs on a daily basis, try watching “Active Measures,” a damning concentration of allegations that will undoubtedly leave liberals pulling those hairs out in frustration.

A methodical look at Vladimir Putin’s rise to power and the latticework of criminality that has enveloped governments worldwide, Jack Bryan’s documentary enlists a who’s-who of high-profile experts and insiders — including Hillary Clinton, John Podesta and more — for a brutal dressing-down of worldwide, metastasized corruption that falls short in laying out straight its particularly slippery bag of snakes only by suggesting the solution is to cut off their tails, not their heads.

Opening with a brief but potent biography of Putin and winding through an abridged but detailed list of transgressions to which his administration is connected, Bryan’s film explores the often intangible but wildly destructive tactics hostile governments employ as “active measures,” including propaganda, cyberattacks and agents of influence. Murdering journalists, opponents and in some likely cases, allies and even innocent civilians, Putin consolidated power under Boris Yeltsin before claiming the mantle of leadership over post-Soviet Union Russia, developing strategies (that would later be used to undermine the U.S. election) against newly-liberated countries like Georgia.

Bryan and his co-writer Marley Clements connect the dots with methodical precision, and minimal sensationalism, although they hardly need to overdramatize connections between Putin and notorious Russian mobster Semion Mogilevich, especially given the numerous flunkies (and their various criminal acts) who overlapped the pair’s Venn diagram of manipulation and malfeasance.

Putin and Mogilevich’s relationship to Trump’s mysteriously indefatigable gift for failing upward is easy to track, though the filmmakers possibly overemphasize the current president’s ability to foresee the many ways he was being manipulated, or maybe just the distance at which Putin and co. recognized he even could be a potential leader. Certainly, and with the added benefit of recent comments made by Forbes reporters about Trump’s obsession with their annual list of power players, the film makes an effective case for the abject corruption of Trump’s dealings in the 1980s, when Trump Towers served — in several cases, according to successful criminal prosecution — as “a money-laundering paradise” for shell companies to buy and sell condominiums without identifying themselves. Later, Deutsche Bank, a company with significant ties to Russia, supported many of Trump’s endeavors long after they imploded or otherwise failed.

Watch Video: Stephen Colbert Congratulates Putin for His Win 'by the Most Made-up Votes'

Most damning, though, is the sophisticated way that Bryan and Clements lay flat the history of technological attacks launched against oppositional regimes, and how brutally impactful they were because of attackers’ profound understanding of the psychologies of the sociocultural ecosystems into which they were released. Footage from a Cambridge Analytica presentation, paired with interviews from experts on Russia’s history of cyberattacks, elucidates the depths of attackers’ knowledge about the way that various cultures work, and in particular, how the unrelenting onslaught of fake sites and phony Facebook posts (among other disseminated stories) preyed upon our specific vulnerabilities as Americans to disseminate materials that would fundamentally undermine our trust in particular candidates, our government and the system as a whole.

(The extra chill comes when an interviewee points out that literally nothing has been done to slow the spread of this attack since Trump took office.)

At 110 minutes, the film’s laserlike focus keeps its talking heads from droning on too long, but also from relaying some of the anecdotal details that are probably juicier than they are relevant. (One that makes the cut is Clinton’s observation that Putin likes to manspread, one of the very few instances where she digresses in any way from essential information.) But like with many other documentaries attempting to chronicle our turbulent recent history, we seem to have moved beyond an era when such thing as a clean or definitive ending exists; at the very least, we’re not yet at anything that resembles one.

Not that the film doesn’t try: Citing semi-successful examples in Georgia and Russia, the filmmakers end with a call to arms that suggests the divided electorate, the citizenry of the U.S., rise up and demand change, for our officials to hold themselves and their colleagues accountable and to do something to secure free and fair elections. If there’s anything that “Active Measures” does most effectively, it’s to demonstrate the depths and the breadth of the corruption, the criminality, the immorality operating in contemporary politics — and after seeing what we’re up against, the last thing people may want to do is to get more involved.