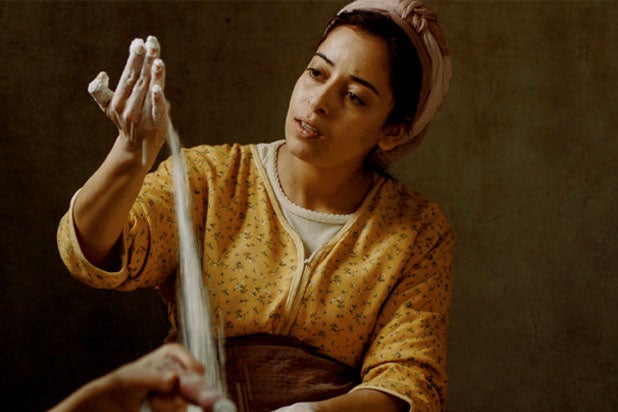 A version of this story about Maryam Touzani and “Adam” first appeared in the International Film issue of TheWrap’s Oscar magazine.

The central characters in the Moroccan drama “Adam” are Abla, the widowed mother of a little girl, and Samia, an unmarried pregnant woman whom Abla reluctantly shelters until she gives birth. Director Maryam Touzani discussed her film, which was chosen as Morocco’s entry in this year’s Oscar race for Best International Feature Film.

This film was based on an episode from your own life, wasn’t it?
The character of Samia was inspired by a woman my parents had taken in when I returned from college. One day a woman came knocking at our door — she was eight months pregnant and had nowhere to go. She had fled her village months before that, because it’s the worst thing that can happen to a woman in Morocco to be pregnant out of wedlock. My parents decided to shelter her because they were afraid to let her go back on the streets in her condition. She could have given birth on the sidewalk. Then, if you gave birth in a hospital they would call the police because it was illegal. Now things have changed slightly, but still you can be sent to prison for having sex outside of marriage.

For the last month of her pregnancy, I was there. It was a very, very intense month that I spent with her. I saw her go through all these different phases in her relationship with her baby — she tried to suppress her emotion because she knew she would give him up for adoption, because she had no choice.

It was something that marked me very deeply, and I kept her inside me for 15 years, until I got pregnant myself. When I felt my child move inside me, I started thinking about her all the time and how terrible it must have been to give up her child. So I started writing, and something instinctive but necessary came out. I didn’t stop until I had finished it.

What were the biggest challenges of making the film?
For me, it was to keep up the artistic line I wanted throughout the whole film. The film is in a small space, and I knew very clearly the way I wanted to film it — the colors I wanted, the light I wanted, the frame I wanted. It was very clear in my mind. And just to be able to keep the characters evolving in parallel. It’s all about how these two women evolve in this close space with this little girl. I think when you decide to film a character’s interiority, that can be a real challenge. I also didn’t want to have a lot of voice, didn’t want to have a lot of dialogue. The film can be very silent.

It was also about letting some scenes find their own rhythm, and finding a harmony and balance.

There are two extraordinary scenes right in the middle of the film — one in which Samia forces Abla to listen to music she’s avoided since her husband’s death, and another when Abla tells the whole story of that death.
I think that sometimes in life you need to be faced violently by your fears. That’s what Samia does to Abla, because she realizes that otherwise she’s never going to be able to move on. She puts her face-to-face with that which hurts her the most, which is her past, which she’s decided to bury. She has remained frozen in time – she refuses to look inside herself, to look at all these things that hurt her, that keep her from advancing, loving and being alive. She has become like a ghost in her own home.

And the scene that comes right after, where she talks about her past, is very important as well, because I wanted her to say the things that I felt were necessary, but not to say too much. It’s very tricky when you don’t like being open. Abla is a very silent character — she doesn’t speak much about her feelings or her emotion or her past, so when she comes out and says these things it was important to me that we understand where her pain is coming from, and that she as a woman has been kept from grieving her husband and moving on.

That’s also because of the way women are treated in regards to death. In this culture, a woman does not have the right to accompany her loved one to the graveyard for burial. She isn’t even allowed to walk into the grave. A woman can only go to the grave three days later. That can be extremely violent to a woman who has lost her husband. I know that, I’ve seen that, I’ve experienced that. A woman is not allowed to mourn in the same manner as a man, basically.

The two scenes are filmed with real intimacy.
We’re on a rooftop, but I didn’t want it to matter where we were. I just wanted us to be with them.

To read more from the International Film Issue, click here.