“AHS: Double Feature” is the fifth season of the Ryan Murphy series that Adina Porter has appeared on, and so far it looks like the most tonally level of the bunch — she previously had a one-episode spot on “Murder House,” and starring roles on “Roanoke,” “Cult” and “Apocalypse.” And as “AHS” fans know those last three in particular get pretty dang silly.

“Double Feature,” by contrast, has a much more serious vibe than we’ve come to expect from “AHS,” at least in these more recent seasons. It’s still absolutely bonkers, but there hasn’t been much winking into the camera.

That’s a fact that has surprised a lot of folks, including myself. But it’s not just those of us on the outside who were caught off guard by the change in tone — Porter told me the scripts were more “over the top” than how “Double Feature” has thus far ended up being, particularly with her character, Chief Burleson. 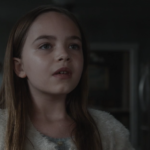 “There’s what I’ve read in the original script that was given to me. And then there was what I performed. And then the editor created things. And I was surprised at what has made the show and what hasn’t made the show,” Porter said.

I think, you know, there’s that amazing expression from Hamlet, ‘the play’s the thing.’ And when we were filming it, there was a lot more — a little bit more over the top, line-wise and character-wise than what’s in the finished product. And as an actor, I saw it and I went, ‘Oh, OK.’ They filmed like the raw materials. And then they kind of put things together to see, which was the best way they wanted to make this particular dish this year.”

Unfortunately, Porter’s character was killed off this week, when the young Alma stabbed her. But does that mean that Porter is done for this season of “AHS”? 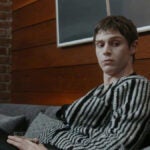 Anything is definitely possible for something to actually happen again, especially in this world. What I love about this world — this world and soap operas — you can easily come back as your evil twin,” Porter joked.