“AHS: Double Feature” is off to a pretty stellar start with a pair of episodes that are among the best in series history. A large part of that is because it simply is taking itself far more seriously than it has in a long time. Yeah, there’s still some of that self-aware goofy charm that we expect from co-creators Ryan Murphy and Brad Falchuk — who wrote these two episodes — but it’s much more restrained about it here so far than the past few seasons have been.

One of the moments where that silly self-awareness shines through is when Austin (Evan Peters) is trying to sell Harry (Finn Wittrock) on his little black pills that make you really good at whatever creative activity is your thing — for Austin and Harry, it’s writing. It’s basically the pill from the movie “Limitless,” with the unfortunate (?) side effect of turning you into a vampire in the process.

Austin left out that last detail during his sales pitch. It’s not like anybody would actually believe the vampire thing anyway. 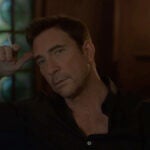 But Austin’s story about how he found out about the pills includes a funny little Easter egg.

“I used to be like you. I thought small, I wrote small. Little plays about things that made little money and attracted little attention,” Austin tells Harry.

“I had a friend. though. He writes for television. You know the name. Disgustingly prolific, silly rich, couldn’t write a thank-you note without somebody handing him a trophy of some kind. And I thought to myself, ‘How is he doing it?’

“And all I knew was that he spent his winters here, and when he returned to the city he had a stack of material as long as my Johnson. He invited me out here one winter, and when I arrived he handed me one of those. Tragic magic little black pills. Within an hour, I was banging away at the keyboard like Amadeus at his harpsichord.” 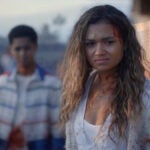 I’d probably assume that was Murphy was making a joke about himself under normal circumstances. But in current circumstances I’m fully convinced. Just a week ago the “American Horror Stories” finale featured characters discussing “AHS” at length as a show that existed in-universe, which was a level of meta I still can’t really comprehend. After that, anything is possible — especially Ryan Murphy being a person who exists in this universe.

But let’s weigh the evidence. Murphy is definitely super prolific. Just this year alone he and Brad Falchuk had the two “AHS” things, the final season of “Pose,” and “Halston,” all of which he wrote some of. That’s a lot of things. He’s also definitely super rich, with FX and Netflix throwing piles of cash at him and Falchuk. And he’s won six Emmys, been nominated for dozens of others, and has a lifetime achievement award from the Producers Guild even though he’s not even 60 years old. So the part about trophies is at least within the realm of artistic license.

It’s possible I’m wrong. But I’m not. Ryan Murphy is probably a vampire within the world of “AHS: Double Feature.” But I doubt we’ll actually see him show up, since he doesn’t do cameos.