After fans’ accusation that Nate was the “real villain” in “The Devil Wears Prada,” Adrian Grenier admitted his character’s shortcomings In an Entertainment Weekly interview Monday.

On Twitter, fans have long argued that Miranda Priestly, played by Meryl Streep, is the “movie villain” whereas Nate, played by Grenier, was the “actual villain” of the film. Fans cite Nate’s lack of support for his girlfriend, Andy, played by Anne Hathaway — particularly the birthday incident where Nate pouts after Andy misses his birthday party to attend a work event.

As Grenier and his fellow cast members weighed in on the villian debate 15 years after the film’s release, Grenier confessed that the memes significantly changed his perspective on his character.

“I didn’t see some of the subtleties and the nuance of this character and what it represented in the film until the wisdom of the masses came online and started to push against the character,” Grenier said, adding that, “All those memes that came out were shocking to me.”

Grenier cites his own immaturity during filming as the reason for his lack of understanding of his character, saying “I was as immature as Nate was at the time.” 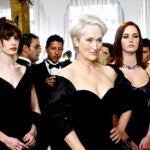 Noting that this story was a “coming-of-age” for Andy, Grenier explained that Nate couldn’t provide the support Andy needed because “he was a fragile, wounded boy.”

“There’s a selfishness in that,” Grenier added.

While the film’s writer Aline Brosh McKenna similarly called out the hypocrisy of Nate and Andy’s other friends for making fun of her commitment to her job yet taking Andy’s free gifts, she emphasized Nate’s utility as a character in reminding Andy of her moral intention — a role that is often played by women.

“What he is critical of is that the values that she set out for herself, she is not following through on, and there’s a hypocrisy there,” McKenna explains.

Hathaway, on the other hand, defended Nate’s poutiness, saying that “We’ve all been brats at different points. We all just need to live, let live, do better!”

You can watch the full interview here.