“AEW: Dynamite” outperformed WWE’s “Raw” in terms of key viewers for the first time ever this week.

With 681,000 viewers in the 18-49 demographic and 1.3 million overall viewers for Wednesday’s episode on TNT, “Dynamite” had one of its best weeks since the show’s launch. The 18-49 audience was the show’s largest ever, and the number of total viewers falls short of only the show’s debut episode.

WWE’s “Raw” pulled in just 678,000 viewers in the demo, marking the first time the show was outperformed by its competition. 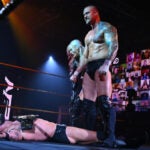 Wednesday’s episode was buoyed by the debut of Bryan Danielson (who previously wrestled for WWE under the name Daniel Bryan) and Adam Cole. “Dynamite” has also been up in the ratings since it brought back WWE fan-favorite CM Punk, who left the sport in 2014.

As TheWrap previously reported, “Dynamite” has been surging in the ratings on Wednesday nights since WWE’s “NXT” moved to Tuesdays earlier this year. Among adults 18-49, All Elite Wrestling’s show outperforms “NXT” by 88%. In overall viewers, “Dynamite” beats “NXT” by 27%.