Republican Sen. Ted Cruz and Rep. Dan Crenshaw were among those who falsely declared Tuesday that a video showed Taliban fighters flying an American helicopter and hanging someone from it. The New York Post was duped, too, but wasn’t quite as credulous. The Post wrote a story on the man suspended from the helicopter, but noted it was “not immediately clear exactly how he is attached or if he is alive.”

In fact, he was alive. The video was posted from a now-suspended account, but another video of the same flight shows the man waving. Both videos make it clear he is not suspended by his neck. 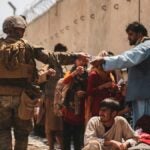 Also Read:
State Department Vows to Get US-Backed Journalists in Afghanistan Out Safely

In a now-deleted tweet, Cruz wrote, “This horrifying image encapsulates Joe Biden’s Afghanistan catastrophe. The Taliban hanging a man from an American Blackhawk helicopter. Tragic. Unimaginable.” He later issued a follow-up that said, “It turns out the post I shared w/ a video of Taliban ‘hanging a man’ from a helicopter may be inaccurate. So I deleted the tweet.”

He added that it “remains accurate” that “the Taliban are brutal terrorists” and “we left them millions in US military equipment, including Black Hawk helicopters.” He then lashed out at CNN for covering his original duping.

Crenshaw had not deleted his tweet by Wednesday afternoon. It read, “In what f***ing world was it a good idea to just hand over a country to these people?” (Asterisks his.) Twitter appended a warning that “this media is presented out of context.” Clicking on the warning brings users to a page of factual tweets about the flight, which actually shows a man trying to “fix a flag over a public building” using “newly-captured US-built equipment,” as reported by the BBC News.

Not to be outdone, Donald Trump Jr. changed his Twitter banner to a mock Biden campaign logo featuring a silhouette of the helicopter image featured in the video.