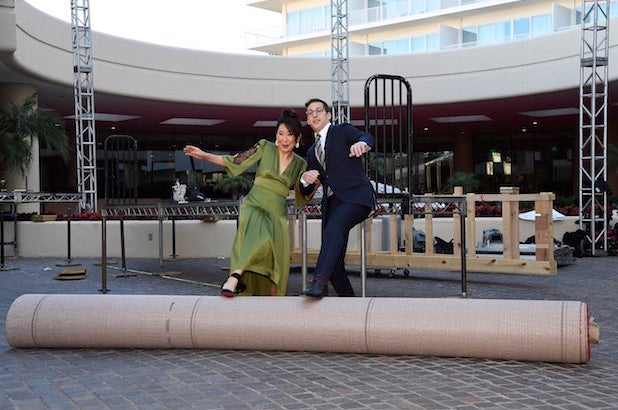 If you’re looking for a few laughs, some embarrassing moments, a pair of actual awards-show hosts (they do exist, AMPAS!) in Andy Samberg and Sandra Oh, and a bunch of movie stars giving each other shiny trophies, the 76th Golden Globes ought to do the trick on Sunday night.

But if you’re looking for the Globes to provide some useful intel about which movies in a wide-open race stand the best chance of taking home the Best Picture Oscar seven weeks from now, you’re looking in the wrong place.

The Golden Globes will be the place to see Lady Gaga take the stage at the Beverly Hilton and accept a couple of awards, but they won’t increase her chances of doing the same at the Dolby Theatre on Feb. 24.

They’ll be the place to see “A Star Is Born” and “Roma” and “Green Book” and “The Favourite” win awards, but they won’t do a thing to resolve the thorny question of whether one of those films or “Black Panther” or “BlacKkKlansman” or “If Beale Street Could Talk” will prevail on Oscar night.

Also Read: Why the 2019 Golden Globes Are Already a Ratings Hit - Probably

That’s because the Globes are their own peculiar event, an awards show that can be widely watched without being particularly influential.

And if it gets all political and fiery, the way it did with Meryl Streep’s speech two years ago and the #TimesUp black-out of last year, that’s fine, too: When the awards don’t carry with them high stakes, the stuff around those awards is free to steal the show and dominate the headlines.

But politics figure to play a reduced role in the Golden Globes as compared to the last two years. In 2017, after all, Hollywood was still reeling from the recent election and impending inauguration of Donald Trump; the next year, the Globes were the first televised awards show in the aftermath of the scandals that had brought down Harvey Weinstein and many others.

Trump is still in office, #TimesUp just celebrated its first anniversary and it’d be surprising if those topics don’t make it into Sunday’s comedy routines and acceptance speeches. But for the first time in a few years, the focus of the evening just might be on the awards race, where three of the five drama nominees come from black directors and the top nominees range from the $1 billion blockbuster “Black Panther” to mainstream hits like “Crazy Rich Asians” and “A Star Is Born” to smaller films like “If Beale Street Could Talk” and “The Favourite.”

Many of those films are also expected to join the Oscar race when the Academy announces its nominations on Jan. 22 — but there are, of course, enormous differences between the 90-odd members of the Hollywood Foreign Press Association who vote for the Globes and the 7,000-plus film professionals who cast ballots for the Oscars.

Yes, the timing of this year’s awards season — the Golden Globes happen on Sunday, Oscar nomination voting begins on Monday — mean that the Globes ceremony will be showcasing films at exactly the right time to give them a boost.

But c’mon, does any Oscar voter need the HFPA’s stamp of approval to tell them that they should watch “A Star Is Born” or “Roma” or “The Favourite” before voting? Let’s hope not. Better that they should be paying attention to the critics’ awards, which might steer them toward some films that might not be so obvious: “The Rider,” maybe, or “First Reformed.”

This year’s Golden Globes, to be sure, are arriving at a key moment in one of the most wide-open awards races in recent memory, with as many as a half-dozen films standing a legitimate chance of being named Best Picture at the Oscars. But they’re not in a position to provide any real insight into how Academy members will be feeling as they cast their ballots between Jan. 7 and Jan. 14.

Instead, we’ll mostly learn about the HFPA on Sunday evening. For instance:

Did they really like “Bohemian Rhapsody” so much that they’ll give the drama-actor award to Rami Malek over Bradley Cooper in “A Star Is Born?”

Did they make “Vice” their most-nominated film because they think it’s best, which means it’ll beat “Green Book” and “The Favourite” in the Best Motion Picture – Musical or Comedy category? Or did it just happen to fit into more categories?

Will their long-documented fondness for kissing up to movie stars mean that Bradley Cooper could win Best Director over Alfonso Cuaron or Spike Lee, or that Nicole Kidman or Julia Roberts could win their sixth or fourth Globes, respectively?

In truth, Golden Globes voters have made reasonable, even smart choices more often than not in recent years; WTF upsets have been a thing of the past for a while now. But the Globes show remains a singular creature, a loose and mostly entertaining show that you don’t have to take seriously, a kudosfest that draws a big audience because it gets stars to show up, and gets stars to show up because it draws a big audience.

Also Read: Which TV Shows Have the Most to Gain From a Golden Globes Win? (Photos)

So unless somebody nails an exceptional acceptance speech to burnish his or her awards appeal, you can expect most of Sunday night’s winners to be forgotten by the time the last Oscar ballot is filed nine days later.

But that doesn’t mean we can’t get a kick out of watching a show that doesn’t come laden with Oscars-style angst, a show where nobody will ever get too worked up over the hosts’ old tweets — or a show where someone can take the stage with a fervent political or social message that will overwhelm everything else that happens, proving that what is said or done at the Globes can be more important than who wins what.

Relax. We might not know any more about this year’s awards season when it’s over than we do now, but that doesn’t mean we can’t enjoy the ride.