We finally reached the live-shows portion of “America’s Got Talent” Season 16 on Tuesday. And that meant that a lot of fan favorites from the audition episodes returned to give their performances in the quarterfinals, including 10-year-old Filipino contestant Peter Rosalita.

Somehow, Peter managed to wow the judges — and us — even more with his second shot on stage last night than his very memorable debut performance. (If you’ve somehow forgotten that one, you can watch it right here now.) During his second round, Peter sang a cover of Whitney Houston’s “I Have Nothing” for judges Sofia Vergara, Simon Cowell, Heidi Klum and Howie Mandel, as all well as those in attendance at the live shows and viewers at home.

Rocking a shimmery suit, Rosalita’s pipes managed to blow us away once again, and brought the audience to their feet with applause when he had finished. 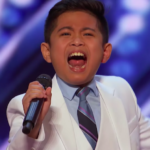 Watch Rosalita’s second “AGT” performance, featuring him singing a beautiful cover of Whitney Houston’s “I Have Nothing,” video above.

Aside from Rosalita’s return, Tuesday’s “America’s Got Talent” featured these moments, per NBC: Comedian Kabir Singh gives us a glimpse into his phone, sharing the missed calls and 14 texts from his mom during his first live performance on the AGT stage; the audience joins in on magician Dustin Tavella’s performance as they help him clear up Howie’s “mess” with a ten of diamonds; and escape artist Matt Johnson knocks on death’s door (literally lays on a door) once again as he nearly escapes a chainsaw to his face.

We still have a ways to go before we find out who is going to win “AGT” Season 16, and head home with the $1 million grand prize. But Peter said during his first appearance that if he were to win, he will buy a Nintendo Switch and a laptop for his online schooling. 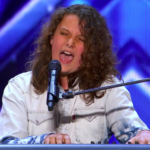