“America’s Got Talent” found us a new Season 16 contestant to love Tuesday with the introduction of Dylan Zangwill, a 14-year-old boy who has an impressive set of pipes. The teen competitor used his voice to channel Freddie Mercury in an unbelievable rendition of Queen’s “Somebody to Love.”

Dylan, who is from Exton, Pennsylvania, played the piano and sang during his performance of the classic Queen track for “AGT” judges Simon Cowell, Sofia Vergara, Heidi Klum and Howie Mandel and host Terry Crews.

It only took until the very first high note in the song (around the 1:10 mark) for the audience to begin to cheer as Zangwill’s Mercury-like energy became apparent. 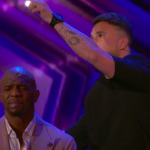 Though we could barely stand on our feet when Dylan was done, he managed to get three of the judges up on theirs (Simon smiled, but stayed seat, because that’s Simon!) and rallied the audience for a standing ovation, too.

Watch Zangwill’s “AGT” debut via the video above.

Dylan wasn’t the only impressive new “AGT” competitor to audition on Tuesday’s episode of the NBC talent competition. Others included a performance from Pasha and Aliona (a very flexible dancer and his marionette partner), an original song about a shirtless Terry Crews sung by the group Lewberger, an extra special pizza delivery by “Pizza Man” Nick Diesslin, and an adorably talented bunny named Bini doing some impressive stunts.

This was the eighth episode of “America’s Got Talent” Season 16, meaning we’ll be moving from audition rounds to the live shows next, with only 36 acts moving on from the first eight weeks of performances. We won’t know who those contestants are beyond the six Golden Buzzer receivers — Northwell Health Nurse Choir, Nightbirde (whose real name is Jane Marczewski), Jimmie Herrod, Léa Kyle, World Taekwando Demonstration Team and Victory Brinker — until “AGT” returns from a two-week hiatus on Aug. 10, after NBC concludes airing the Olympic Games from Tokyo.