This review of “Ahed’s Knee” was first published on July 7, 2021, after its premiere at the Cannes Film Festival.

There’s a Cannes connection which could stand him in good stead: His film “The Kindergarten Teacher” debuted in Critics’ Week here on the Croisette in 2014 and was remade by Maggie Gyllenhaal, who now sits on this year’s Cannes jury. She might look upon it favorably, as will festival audiences and certain art-house cinemas, though it’s unlikely a remake will be in anybody’s mind.

“Ahed’s Knee” begins with an audition session in which young women show their knees through ripped jeans and go through various stages of emotion for a camera and an unmoved casting director. We learn that they’re trying out for the part of a Palestinian teenager named Ahed Tamini, who in 2018 slapped an Israeli soldier and resisted arrest. Footage of the incident went viral and earned her heroine status in her home state, but plenty of Israelis also supported an Israeli MP’s tweet suggesting she should be “shot through her kneecap”.

But soon the director of the intended film about Ahed — known simply as Y and is played by dancer Avshalom Pollak — is landing in a remote desert town in the Arava region to attend a screening of one of his earlier films at the local library. The trip has been organized by a young woman from the Ministry of Culture, Yahalom (Nur Fibak), who grew up in the same desert and is a fan of Y’s work. 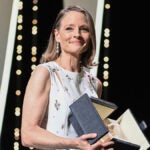 Y becomes agitated when he finds out he has to sign a form from the Ministry that will limit the topics he’s allowed to discuss in the Q&A following the screening. Despite initially warming to Yahalom, he now begins to see her as a tool in a fascist state and accuses her of betrayal. With the help of a reporter friend, he secretly plans to do an exposé on Yahalom.

“Ahed’s Knee” is a radical film for an Israeli movie — or for any movie. Y’s invective and anger against his own country is powerful and challenging and yet the movie is full of lyrical flourishes, flashbacks and musical sequences, including a car ride and dance to Bill Withers’ “Lovely Day” that may or may not be laced with irony.

The constant lurches in tone are deftly managed by the director so that they serve to keep viewers on their toes — Y is such a live-wire, confrontational presence that you’re never sure what he’s going to do or say next. He’s thinking of Ahed’s knee (one assumes there’s an implicit reference to the sensory memory of Eric Rohmer’s “Claire’s Knee,” although the impulse is more political than romantic or sexual), of work and of being back in the city, and he seems to be addressing his mother in voiceover and sending her shots of the desert landscape.

But he also re-creates, in a stirring monologue set to pictures, a scene from his national service days when he and his army troop were supplied with cyanide pills should they be captured by Syrian soldiers. These heightened, choreographed scenes have inevitable echoes of Claire Denis and “Beau Travail.”

The performances are striking and do much to keep the film on a tightrope. Overall, though, it’s a work of robust intellectual energy and raging conflict that could come across as hectoring and even bullying. While fizzing with ideas and ideologies about cultural freedom, it’s also a very physical film, with close ups of skin — knees, toes, torsos — and the dry crunch of the stony desert.

The specter of war is never far from the film’s thoughts, even in as remote and forbidding a place as this desert — which, as a taxi driver informs us, was once the bell pepper growing capital of the world. The peppers now lie rotting by the roadside, a metaphor for the brutal, political poetry of a man trying to be a relevant, truthful artist in a culture and society at war with itself.