I’ll write more about the film “Up in the Air” soon; for now, suffice it to say that it’s a restrained, timely, resonant work that lives up to the considerable buzz it’s been acquiring lately.

But before I get into that, I want to say a little about the film’s music, which grabbed me right off the bat. A few years ago, I was listening to KCRW when I heard a tough, funky version of “This Land Is Your Land”; determined to buy it, I went to the radio station’s website only to find that it was from an album that wouldn’t be coming out for a couple of months.

So I forgot about it  … until last night, when the opening credits of “Up in the Air” featured that same song, from a New York-based band called Sharon Jones and the Dap-Kings. 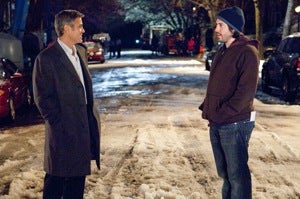 At a post-screening reception, when I told director Jason Reitman (right, with George Clooney) that he’d rescued a song I loved but had forgotten about, he immediately started enthusing about Jones, and about other artists on the Brooklyn-based Daptone Records label, which records new soul, funk and gospel music with the feel of classic low-tech, down-home recordings from Detroit labels of the 1960s.

But he also admitted that he’d initially planned a different opening-credits song for his film: Hank Williams’ mournful “Ramblin’ Man.”

The Williams song certainly makes sense as an introduction to George Clooney’s character, a corporate "termination engineer" who travels around the country firing people.

You couldn’t get a more artful description than this initial verse:

“I always thought that would be the opening song, but it turned out to be too sad and downbeat,” Reitman said after the screening at ICM in Century City.  “So I put ‘This Land is Your Land’ in there, and it seemed to fit.”

Reitman’s last film, "Juno," helped propel indie-rock tunes like the Moldy Peaches’ "Anyone Else But You" onto the charts, and gave the Rhino Records label its first No. 1 album ever.  The new soundtrack also is coming out on Rhino — which, in a sad reminder of just how timely Reitman’s theme is, recently fired 40 employees.

But unlike "Juno," whose key songs were all previously released, "Up in the Air" figures to have a contender in the Oscar best-song race. “Help Yourself,” a gentle, acoustic and quietly inspirational ballad by Brad Smith (who records as Sad Brad Smith), plays behind a few emotional moments about two-thirds of the way into the film.

Given the way the music branch nominates original songs – they vote after watching the sequences in which the songs appear – that means it’ll at least get a proper amount of attention and respect.

A different song, though, has gotten the lion’s share of attention: it’s the title track, written by an unrecorded, unemployed St. Louis musician who handed a cassette to Reitman after the director did a Q&A at Webster University.

Reitman found a tape deck, listened, liked the song and put it in his movie – and now the musician, Kevin Renick, is in a movie he didn’t even know existed at the time he decided to write a song called “Up in the Air.”

Renick’s journey makes for a terrific story, albeit one that disqualifies the song from Oscar contention – after all, songs have to be written specifically for the movie in order to be eligible. Its placement in the film also takes it out of the running: An end-credits song is eligible for a nomination only if it’s the first piece of music heard during the credits, whereas Renick’s song comes midway through the credits, after an old Graham Nash track.

Then again, I doubt the guy was thinking about an Oscar nomination when he sat down to write a song about being laid off. Chances are he’s happy enough that Reitman gave him a listen.