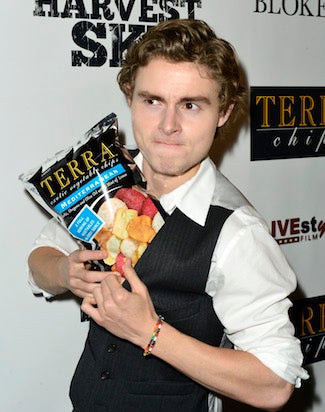 Spider-Man has the US Postal Service and Kelloggs, Captain America drives a specially designed Chevrolet, and just about every other major tentpole movie this summer will have its share of product placement and co-marketing deals. This sort of business is nothing new or unusual for such global brands, who need to dominate the awareness of moviegoers around the world. But now, independent filmmakers are joining the race for marketing dollars and eyeballs.

Aron Gaudet and Gita Pullapilly‘s new film “Beneath the Harvest Sky” just hit theaters in limited release, and has been available on VOD from Tribeca Film for the last few weeks. It’s also been one of the heavily featured options for inflight entertainment on JetBlue — not an easy position to attain for a small, independent drama — thanks to the filmmakers’ deal with Terra Chips, the official potato chip of the airline.

The promotional coup was engineered by a group at the Harvard Business School, which had already helped the filmmakers develop a plan to self-distribute their award-winning 2009 documentary, “The Way We Get By.” Gaudet and Pullapilly turned again to the school for help when they began work on “Beneath the Harvest Sky,” this time in hopes of finding a path to success with more traditional distribution.

“We were like, what happens if we get to the end and nobody wants this film? It’d be a nightmare,” Pullapilly remembered. “We said, we want to find out if there’s one avenue where distributors, independent filmmakers and investors can work together to find a win-win solution so they benefit and we benefit as well. So after all the research, they said, your key is to find a way to reduce P&A costs, so find a third party marketing partner to help reduce backend. You lock it in early, you lock it in pre-production.”

The married filmmakers moved up to a rural blue potato farming community in Northern Maine, where they began filming the spring harvest.

“We met this farm family that really grew all these blue potatoes that become Terra Blue Potato Chips, and we’re shooting all of our harvest scenes on the farm, and as we’re writing the script we’re basing our farmer in the movie on this real family that grows blue potatoes,” Gaudet said. “So we’re just like, okay, this farmer is doing that, and then they have this relationship with Terra, and they’re talking about how they have this great sort of direct relationship with Terra Chips, and we were like, we should see if they’re interested in helping us market the film.”

It’s already a challenge to get any deep-pocketed company on board with an independent film, and the subject matter of “Beneath the Harvest Sky” figured to make it even harder to get Terra on board. Gaudet and Pullapilly went to live in Maine and research for a film about the harvest, but found a hardscrabble place that is at the center of the prescription drug addiction epidemic. The drug pushing and its terrible impact became the story they wanted to tell, and soon became the focus of the movie.

It led to a great role and performance from Emory Cohen (“The Place Beyond the Pines”) as a troubled high schooler who gets caught up in the trade, but the filmmakers figured that Terra wouldn’t want to have their brand and logo prominently featured in a film that shows the epidemic ravaging the towns where some of the products are harvested.

To the filmmakers astonishment, the company signed on.

“The overlay of their consumers and indie film fans are identical,” Gaudet said. “So they said ‘Hey, we trust our brand, we trust our consumers. They’re not grabbing Lays, they’re taking a little risk with these. They’re going to appreciate us being involved in a movie that is a little different.'”

The film features heavy improvisation from Cohen, who spent a month up in Maine before the shoot, riding around with teenagers and drug pushers. He brought an extra edge to the movie, and as Pullapilly noted, “There’s a lot more fucks in the film than the script. “

Still, Terra stayed on board, hoping to buy some indie cred.

And so, the company’s logo features in the film, on semi-trucks and on bags of potatoes seen throughout. It’s not distracting, per se, but definitely noticeable. In exchange, “Beneath the Harvest Sky” will be promoted on their products and on JetBlue through the summer, providing a huge boost to the traditionally small indie marketing budget.

Now that digital technology means that movies are so cheap to produce, it is only marketing and eyeballs that gets in the way of their success. Not every film will have such a natural partner, but the “Beneath the Harvest Sky” test case could be used by other filmmakers in the right circumstances.