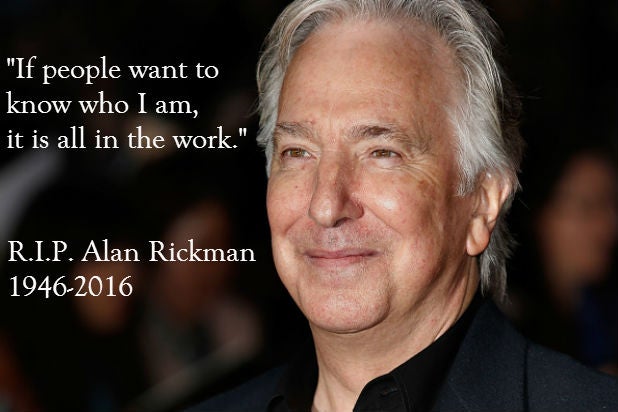 Tributes are pouring in from around the world for Alan Rickman, the iconic British actor who died on Thursday at the age of 69.

Daniel Radcliffe, who played Harry Potter to Rickman’s Professor Snape, wrote a heartfelt tribute on his Google Plus page, honoring his former co-star.

“Alan Rickman is undoubtedly one of the greatest actors I will ever work with,” Radcliffe wrote. “He is also, one of the loyalest and most supportive people I’ve ever met in the film industry. He was so encouraging of me both on set and in the years post-Potter.

“People create perceptions of actors based on the parts they played so it might surprise some people to learn that contrary to some of the sterner (or downright scary) characters he played, Alan was extremely kind, generous, self-deprecating and funny,” he continued.

Emma Watson, who played Hermione Granger alongside Radcliffe and Rickman in the Harry Potter films, also wrote a message to fans on her Facebook page.

“I’m very sad to hear about Alan today,” Watson wrote. “I feel so lucky to have worked and spent time with such a special man and actor. I’ll really miss our conversations. RIP Alan. We love you.”

Read other celebrity reactions to Rickman’s death below:

There are no words to express how shocked and devastated I am to hear of Alan Rickman‘s death. He was a magnificent actor & a wonderful man.

My thoughts are with Rima and the rest of Alan’s family. We have all lost a great talent. They have lost part of their hearts. – J.K. Rowling (@jk_rowling) January 14, 2016

I do not want my heroes to die! Alan Rickman is dead & he was another hero. Alan – thank you for being with us. We are sorry you had to go

Our hearts are broken. Thank you for sharing your talent with us #AlanRickman We will miss you #Always – Justin Guarini (@JustinGuarini) January 14, 2016

I was at Leavesden Studios today when I heard the news. As I walked through the canteen I thought of Alan queuing up for his lunch with us mere mortals. I recalled the trailer in which he offered me some of the greatest advice I ever received about this mad profession we shared. Being back in those corridors made me remember a lot of things and I will treasure those memories all my life. He inspired my career more than he ever knew and I'll miss him.

Oscar noms out. Couldn’t care as Alan Rickman is gone & could have done every job on those movies as well, women included. Stunning talent. – Jamie Lee Curtis (@jamieleecurtis) January 14, 2016