Alice, the titular protagonist of “Alice, Darling,” cannot think of lying to her boyfriend, Simon, without throwing up. Yet she insists to her friends, who have noticed her gradual withdrawal, that everything is fine. They love each other.

Sure, Simon makes her feel awful about everything: her friends, her eating habits, her job. He regularly guilts her into sex and sexting. He’s winnowed her life down to the essential, arduous project of stroking his ego. But he doesn’t hit her, rarely yells at her. So what does she have to complain about?

“Alice, Darling,” the debut feature from director Mary Nighy, picks at these common ideas — that abuse only looks a certain way, that mental scars cannot be as serious as physical ones — until they unravel. Alanna Francis (“The Rest of Us”) has written a tastefully subtle story of intimate partner violence. As Alice, Anna Kendrick hits her notes well. But the real heart of “Alice, Darling,” what sets this otherwise accomplished-but-unremarkable film apart, are Alice’s two best friends. 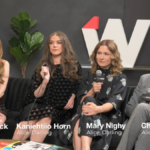 Sophie (Wunmi Mosaku, “Lovecraft Country”) and Tess (Kaniehtiio Horn, “Possessor,” “Death Wish”) have been Alice’s besties since childhood, though you wouldn’t know it at first. In the first part of the film, Alice stumbles through catch-up drinks with them, and they try to cajole her into going to Sophie’s lake house to celebrate Tess’s 30th birthday. Alice reluctantly agrees and begins the stomach-churning work of lying her way out of her shared apartment with Simon (Charlie Carrick, “Deep Water”) for the week.

The bulk of the film takes place at Sophie’s lakeside cottage. At first, Alice is caught up in the persona she’s taken on to try and appease Simon. She’s constantly glued to her phone, in case he messages her. She runs for hours every morning, listening to self-improvement podcasts and besmirching junk food, sugar and fun in general. Though at first they resentfully wonder who has replaced their friend with this skinny automaton, Sophie and Tess eventually learn the true nature of Alice and Simon’s relationship.

And Simon has certainly done a number on Alice. When panic overtakes her, she tears out strands of her own hair and rolls them up into little balls. Tess asks Alice why she lied to Simon about where she would be — he thinks she’s on a work trip, not a girls’ trip — and she just sobs, “Because I’m bad.” 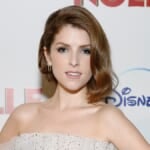 “Alice, Darling” manages to hold its ground as a drama without teetering into afterschool-special territory because it privileges Alice’s experience of abuse over specific instances of it. We certainly see some of Simon’s controlling behavior, but what matters more are the lasting effects of it. Alice is placid and pliable, endlessly working to smooth the way for Simon. As a result, her life is about as big as an Anna Kendrick–sized plastic box. If Simon doesn’t want to eat sugar, she won’t. If Simon doesn’t like her spending time with her lifelong friends, she won’t. She doesn’t even have any say in whether or not she showers alone.

One of the film’s highlights is its pointed acknowledgement of the ways in which abusive men can use misogynistic beauty standards to control their female partners. Alice wakes up early, clad in pristine lingerie, to shave her body, style her hair, and apply makeup, lest Simon catch her looking like an actual human woman. 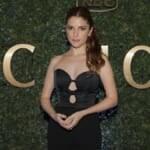 Also Read:
Anna Kendrick Totally Wins at Getting Stuck in an Elevator – and Was Even Rescued by ‘Lovely’ Firefighters

This film is smart and well-considered, but its billing as a thriller is a stretch. There’s a weapon on the property and a girl gone missing, but don’t get your hopes up. This isn’t anything like that other recent four-person Canadian lakeside film, Madeleine Sims-Fewer and Dusty Mancinelli’s Sundance chiller “Violation.” You’re not going to see any bloodshed here. You might not even be particularly challenged or shocked by this movie at all, though it certainly breaks important ground for anyone looking to put a name to similar experiences.

When all’s said and done, “Alice, Darling” is missing emotional oomph. Maybe it’s because Anna Kendrick is still getting her dramatic feet under her or because the filmmaking (save for some very savvy editing by Gareth C. Scales of “After Love”) is fairly by-the-numbers — the score appropriately mellow, the cinematography fine.

What saves this wallflower of a drama is its focus on the women’s friendship, which Mosaku and Horn sell with aplomb. Flashes of girlish revelry — dive-bar dancing, dowdy outfits, piles of discarded junk food — offer a heartwarming center to this heavy story. It’s clear that these women are comfortable existing just as they are together. It is only here that Alice can even begin to break out of Simon’s programming, to wonder if the relentless, admonishing voice in her head might be wrong.